Unsigned band The Verse have ambition

There’s a new guitar band in town, with an attitude to conquer the world. “We’re all about not using backing tracks,” 19-year-old former Wolgarston High School pupil, lead singer and rhythm guitarist Jack Harrison tells us. 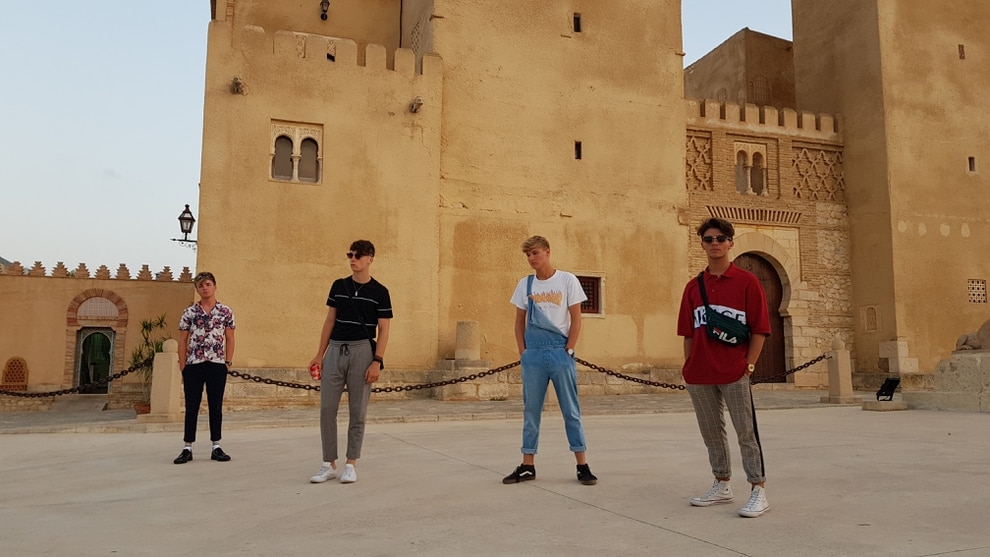 “We’re a four-piece band. There’s Alex Cottom on lead guitar from Redditch, Jack Taplin on drums and Dean Pinnegar on bass, both from Nuneaton. They’re all 18.

“We play live and if we screw up the audience hears it, but it keeps our music organic and natural sounding – thankfully we don’t screw up that often!”

And for the teens, practice makes perfect.

“We practice for three-to-four hours every week at an awesome rehearsal space in Birmingham called Muthers Studio. Miles Cocker, rehearsal manager is a cool guy who’s been really supportive of us, and the team there are very supportive of the Midlands music scene. Hence why Miles appears on the front cover of our new single.”

That single was released last Friday, called Whatever You Ask. It’s work the boys are proud of, too.

“We are really happy with it, it’s already had plays on BBC introducing Hereford & Worcester and people that have heard it have given us great feedback.”

Online music blog Indie Midlands described the song as ‘classically and unapologetically indie, already sounding like a B-side from a Catfish and the Bottlemen album’. And they are proving popular with fans too, one proudly posting images on Twitter of a tattoo of the band’s logo on her leg.

It’s not the first time they have received strong praise. Their previous single was called Thick As Thieves, which is available to hear on Spotify.

“The first song we released absolutely exceeded or expectations,” Jack adds. “We were hoping for it to get 1,000 streams on Spotify. We currently have more than 10,000 streams and 4,000 listeners which has blown us away. “On its release it also achieved number 12 on the iTunes Alternative chart which for an independent band playing indie music was mind blowing to us. But we think plays on BBC Introducing really helped.”

The Verse are not naïve either. They realise that for a relatively unknown act putting all the legwork in themselves it was a strong start. But rather than immediately snap the hand off the first person to offer to promote them they decided to keep all that in-house.

“We don’t have the backing of a manager or record label,” says Jack. “We write all our own music as a band and all have equal input on the structure and lyrics, no one person is responsible for writing and we love the process. As a band, writing what you feel is a good track makes you a stronger unit because you do it all yourself and you aren’t directed by a record company as to what they say ‘works’.

“We are always open to talk with people who are interested in helping get our music out there to more listeners. However, at the moment we are comfortable self-managing and enjoy having full control in everything we do.” It’s a busy time for The Verse on top of their single releases. The songwriting hasn’t stopped, and Jack admits that recently spending time out in Spain to celebrate drummer Taplin’s 18th birthday helped him to write material with a different perspective.

“We are writing all the time, in the studio and at home,” he adds. “The boys and I are keen to release the music we have ready first to show everyone what we can do. Maybe then we might start thinking about an album but we won’t drop one ‘til we’re happy with it.

“I believe it’s important to write every song with the thought of it being a stand-alone single rather than writing for an album, then the album should fall into place with no weak songs. Hopefully. . .

“We were all in Spain for our drummer’s 18th. Being in a different environment has also enabled me to write some lyrics from a different perspective, which is cool.”

And that concentration on their current material has seen them going up and down the country trying to rope in as many fans as they can through their rowdy live performances.

“We are doing a lot of gigs all over the UK. Playing the O2 Academy Birmingham is probably our favourite venue as it feels like a home crowd with it being the Midlands. We’ve played there twice and the crowd goes off, the Midlands crowds are always awesome.

“We just have a blast playing music we would like to listen to and hope the audience feel the same. We’re in no rush to get signed to a major label. We kind of like the fact we have total control over our own music and, to be fair, we’re young with plenty of time.”

And that time starts now. The Verse are next in action at Birmingham’s Sunflower Lounge on September 22 and are busy organising an autumn tour with the help of promoter Distortion.

Wolverhampton Literature Festival: Humorous tale of the city's history to feature at event