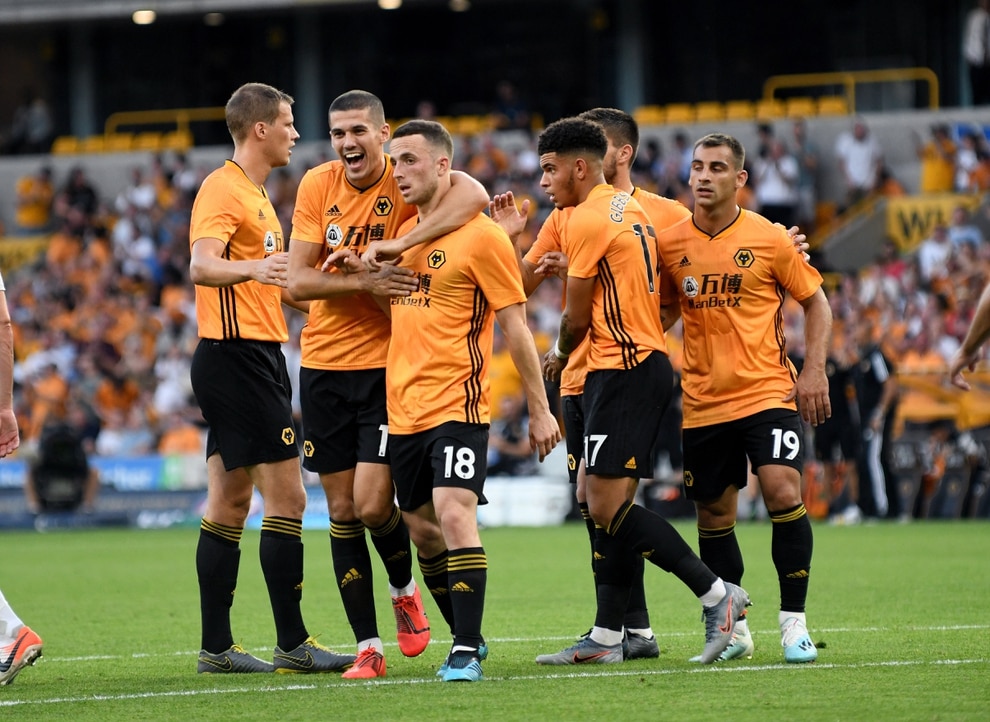 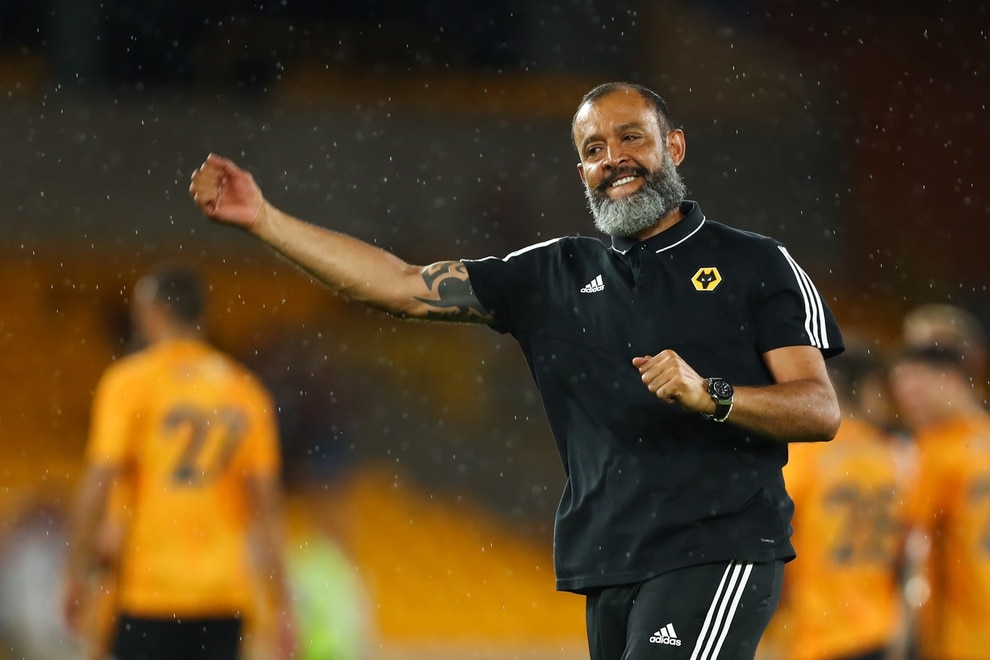 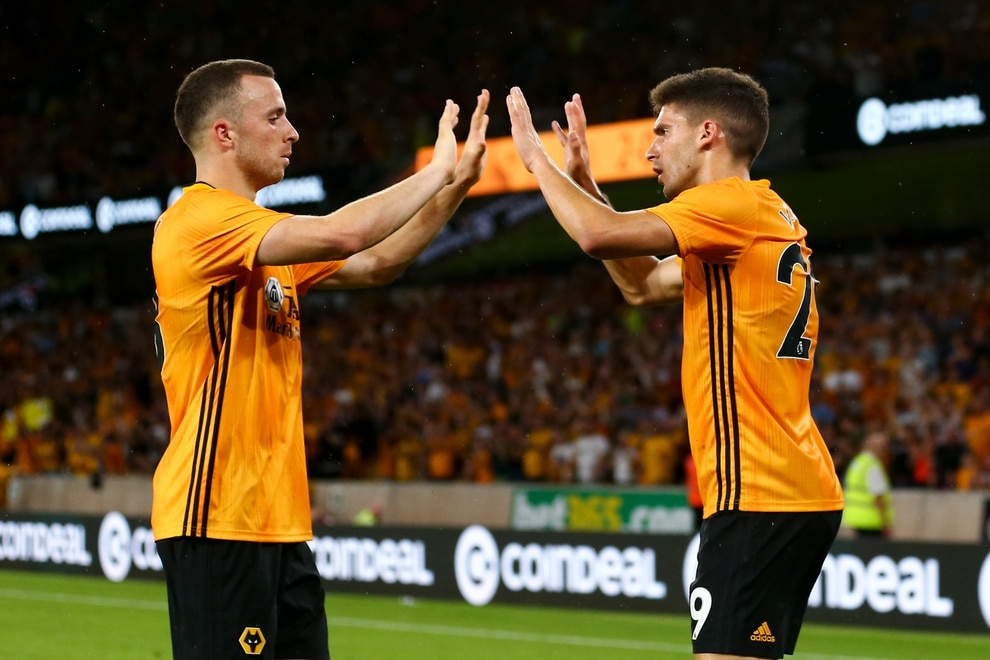 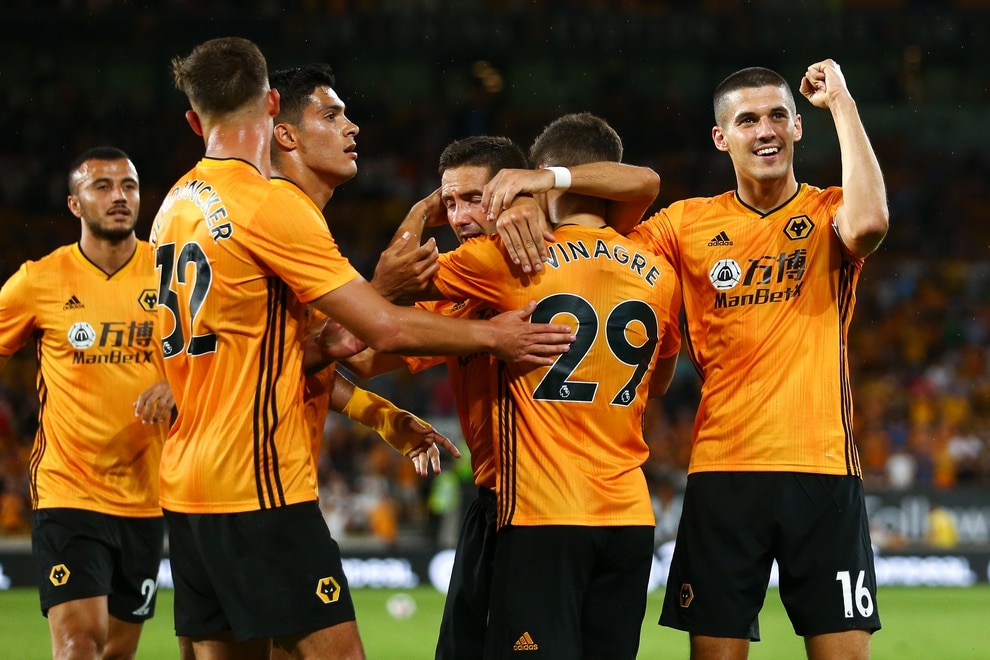 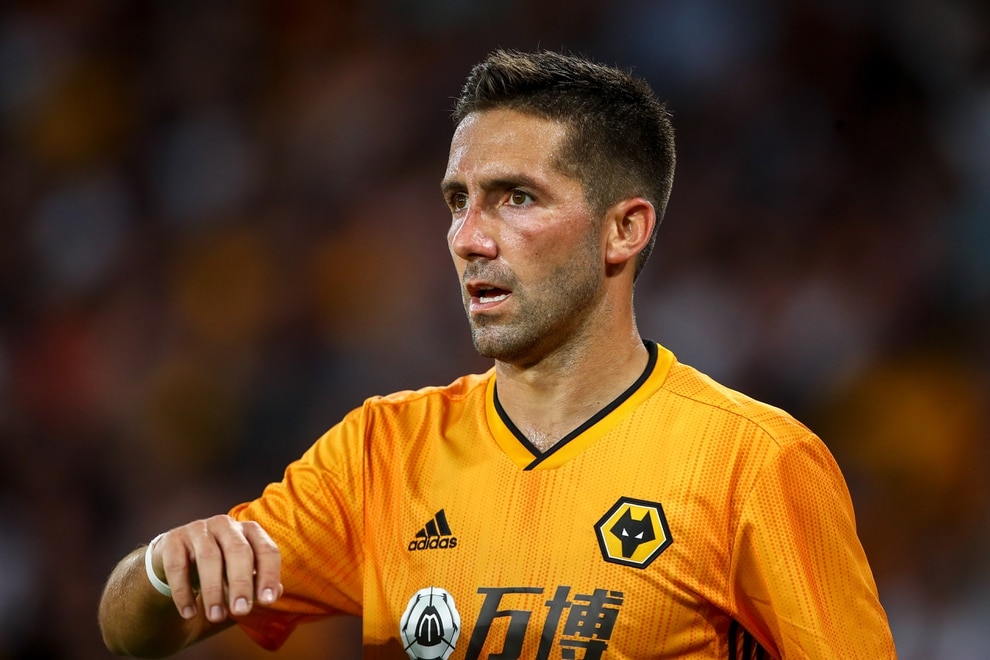 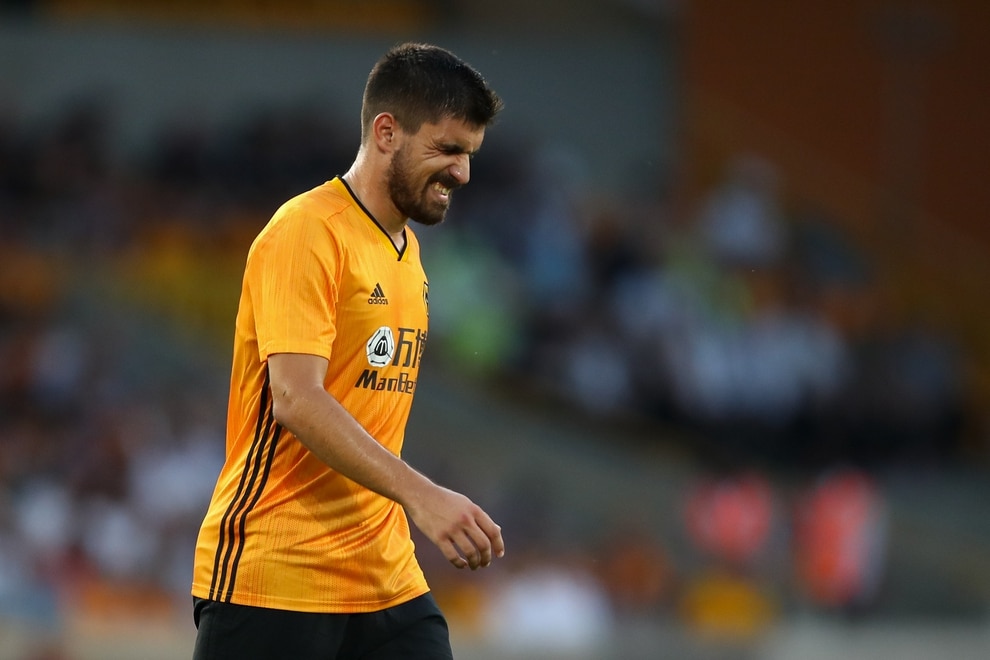 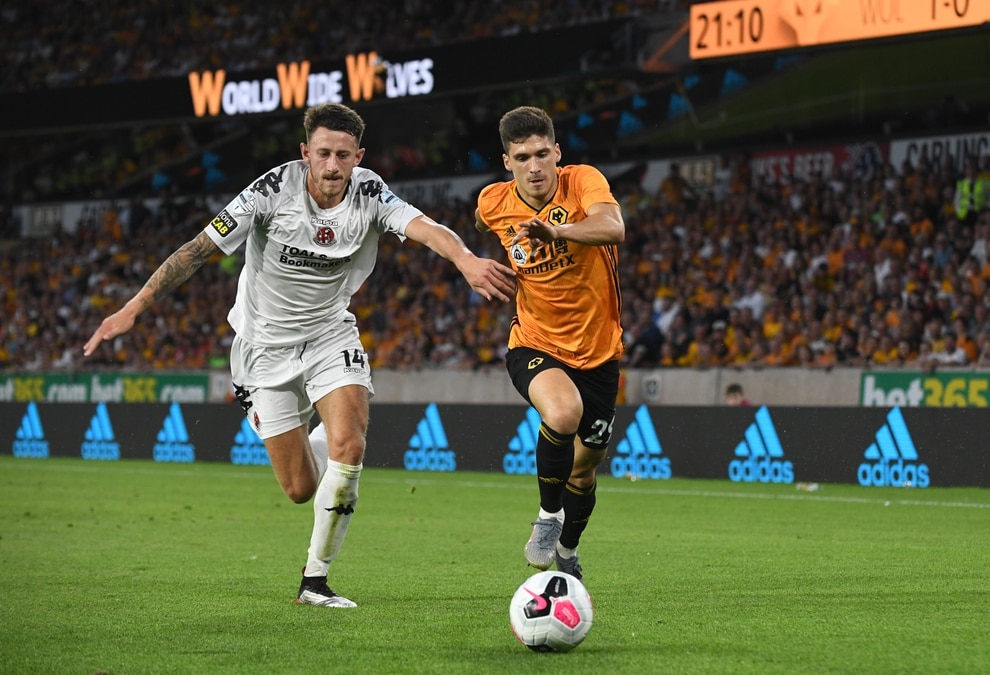 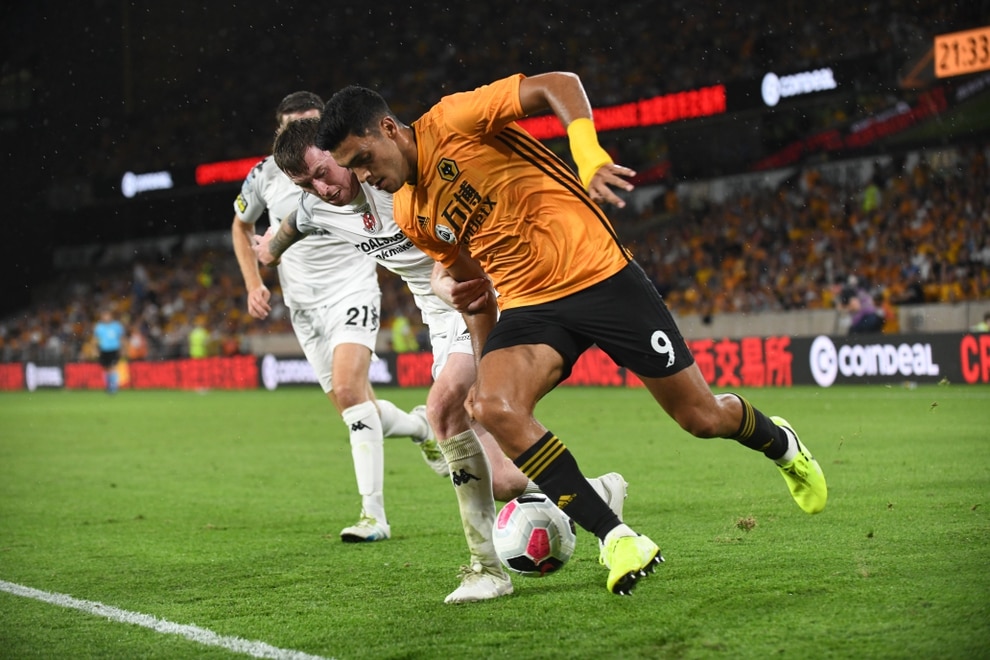 Wolves dominated the first half but only had Diogo Jota's fiercely-struck shot from Adama Traore's cross to show despite amassing 15 shots and controlling possession.

That dominance continued after the break but it looked like a solitary goal would be all Wolves could muster until substitute Vinagre took advantage of keeper Sean O'Neill's spill to score with the last kick of the game.

A huge occasion for Wolverhampton Wanderers, in their first European game for almost four decades, had threatened to end in an underwhelming manner.

A 1-0 lead wouldn't have been what Nuno Espirito Santo envisaged taking to Northern Ireland next week, writes Tim Spiers at Molineux.

Step forward Ruben Vinagre, fresh from signing a new contract, to score with the final kick of the game and give a much more positive slant on this two-legged tie.

This was a bit of a thankless task for Nuno's boys, who were presented with a wall of white shirts as defensive-minded, organised and resolute Crusaders, who finished fourth in the Northern Irish league last season, attempted to keep the score down at Molineux.

Wolves had 30 shots in total and 80 per cent the ball, but struggled to blow the Crusaders door down for long periods and transmit their dominance into goals.

There was certainly no lack of effort on Wolves' part, far from it, but with only a short pre-season behind them it was noticeable that their intensity levels waned in the closing stages – not something that could have been said last season.

And then there's the old bugbear from 2018/19 of struggling to break down defensive-minded teams.

Adama Traore was on great form. On a night when there were no trains from Wolverhampton station, the express train tried his best to single-handedly beat Crusaders on his own – and left-back Jarlath O'Rourke may struggle to sleep tonight given the torrid time Traore gave him – but, for all the shots Wolves produced, incisive creativity was lacking at times.

They kept plugging away and, eventually, got their rewards with that Vinagre strike. Given the gulf in class, next Thursday shouldn't – in theory – present too much of a problem.

Nuno stuck with the XI who started both of Wolves' games in China, where they beat Newcastle and Manchester City to win the Premier League Asia Trophy.

The visitors finished fourth in the Northern Irish league last season and with boss Stephen Baxter saying before kick off that 3-0 would be a good scoreline to escape Molineux with, you knew Crusaders weren't exactly going to come out and play open, attacking football.

That said, they conjured up the game's first chance when former Villa youngster Rory Hale fired a volley just wide from a cleared corner.

Thereafter it was total one-way dominance from the home side, who spent the remainder of the half trying to pick their way through a wall of white shirts.

Morgan Gibbs-White and Diogo Jota looked to link up in and around the Crusaders box, while the flying Adama Traore was an obvious outlet on the right flank.

The Spaniard had been selected as a wing-back but he was very much a winger in this attack versus defence contest. Crusaders doubled up on Traore but that was little deterrent to a man of his ability – and his end product wasn't bad either.

The chances came thick and fast but they weren't of the clear-cut variety.

Joao Moutinho drilled a 20-yarder at the keeper, Jota dragged an effort across goal after good work from Leander Dendoncker, Gibbs-White headed at the keeper, Jota skipped past three players like they didn't exist before being denied by a last-ditch block and Ryan Bennett headed a cross over.

Gibbs-White curled a lovely shot over the bar and Dendoncker's effort from range was beaten away as Crusaders began to really frustrate the home team – and a visibily irked Nuno who will have wanted more inventiveness from his team's passing.

Then on 37 minutes the deadlock was broken – and it was no surprise that Jota was the man to do it, given his magnificent form at the end of last season and his two well-taken goals in China. He met Traore's floated cross with a bullet first-time shot on the half volley from 10 yards that rocketed past the keeper.

He should have doubled the lead just a couple of minutes later when a Neves effort fell perfectly into his path, but keeper Sean O'Neill made a good save with his legs from point blank range.

Wolves had to settle for 1-0 at the break then, despite enjoying 80 per cent possession and firing 15 shots at goal.

Nuno's team came flying out the traps at the start of the second half, with Dendoncker sidefooting wide via a deflected and then Bennett nodding past the post from the resulting corner.

Raul Jimenez entered the fray in place of a gingerly walking Neves, who appeared to have hurt his hip in an aerial challenge.

Then Gibbs-White went close twice in a couple of minutes, first lashing a great effort just over after taking the excellent Dendoncker's pass, and then heading Jimenez's gorgeous clipped cross mere inches past the post as he searched in vain for his first competitive goal.

With 25 minutes left on the clock, for all Wolves' continuous dominance the 1-0 scoreline was an unsatisfactory one to take over to Northern Ireland.

On came Ruben Vinagre for Otto as Nuno looked to stretch the play further but Wolves' pace dropped as we entered the closing stages.

Jimenez saw a powerful header held by O'Neill but, other than the odd burst from Traore, Wolves were offering little in the way of attacking prowess despite completely controlling possession.

It was Traore who single-handedly forged a half chance with six minutes to go when cutting inside and firing goalwards left-footed, but the effort was blocked.

It looked as though it would finish 1-0, but in the dying seconds of stoppage time Moutinho's cross was spilled by O'Neill and Vinagre tapped home for his second goal for the club – and a pretty important one at that – as the home fans went home happy.

39 - GOOOALLLL! Wolves' first scorer in Europe since 1980 is Jota, and in some style! Traore gets to the byline and floats a cross to the penalty spot, where Jota slams the ball home on the half-volley. Emphatic finish from an excellent player.

41 - Jota has a great chance to double his and Wolves' tally. A long-range effort from Neves deflects into his path, but the shot is too close to O'Neill who was quick off his line.

90+3 - GOOOALLLLL! Vinagre, at long last, puts the hosts two to the good! O'Neill's howler, dropping a tame cross, gives the Portuguese wing-back the easy task of tapping in from a few yards.

The return leg takes place in Belfast next Thursday at Crusaders' Seaview ground, kick off 8pm.