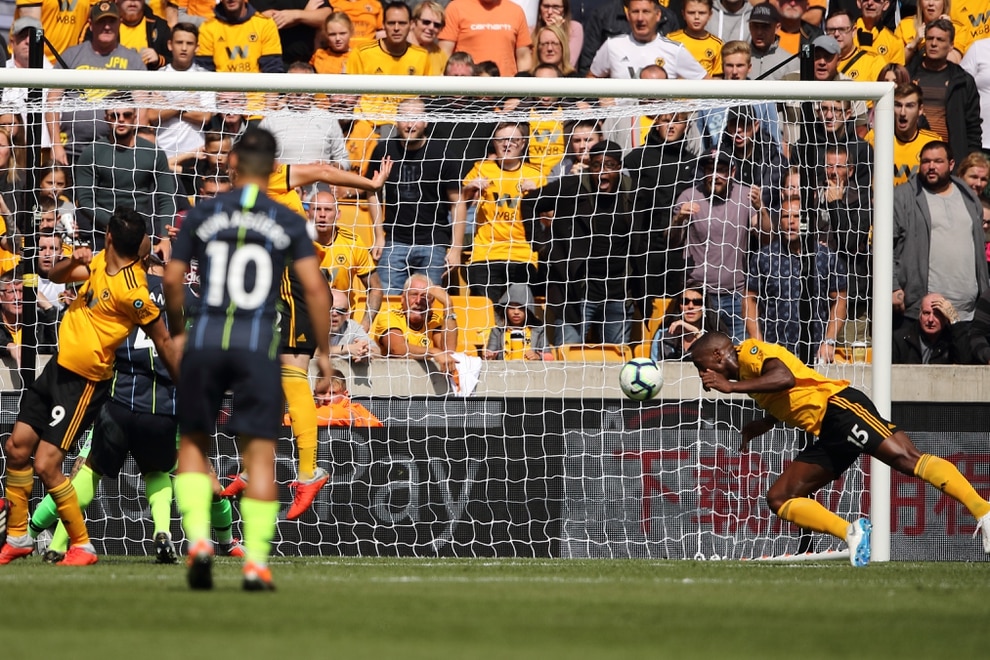 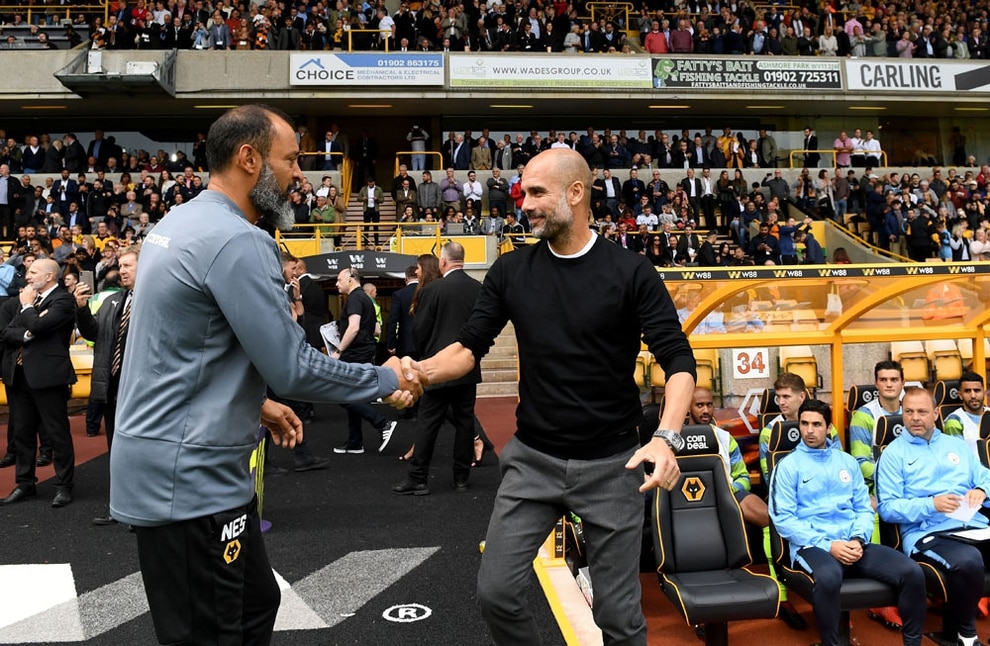 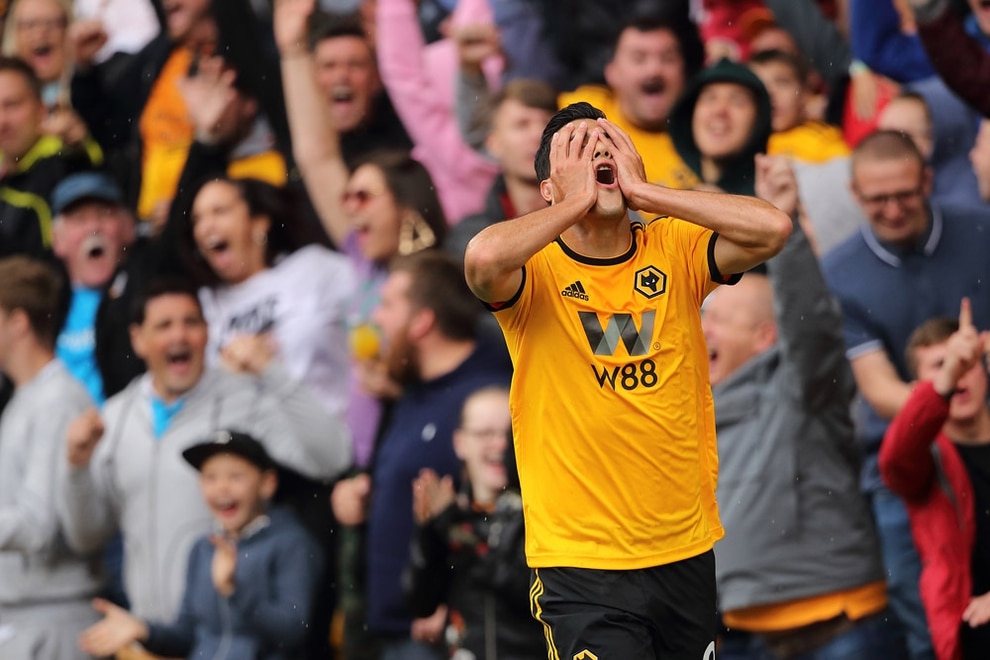 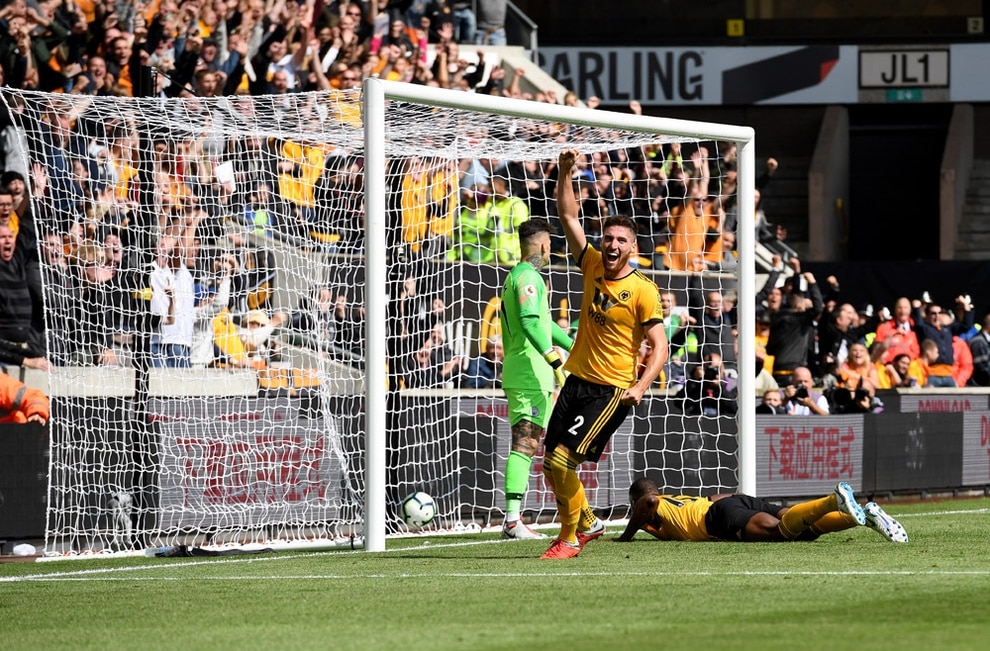 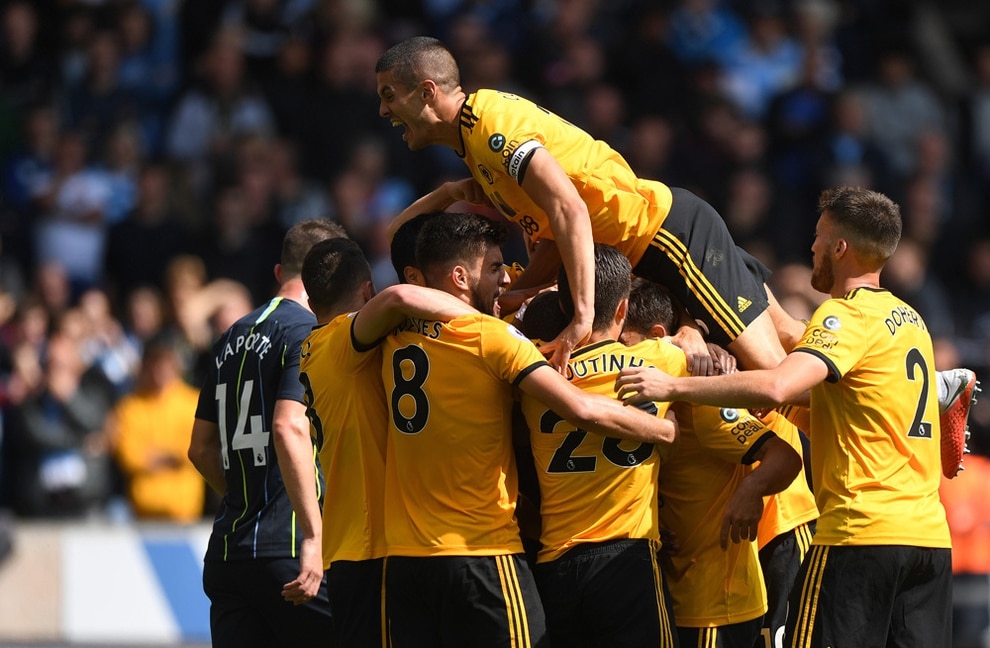 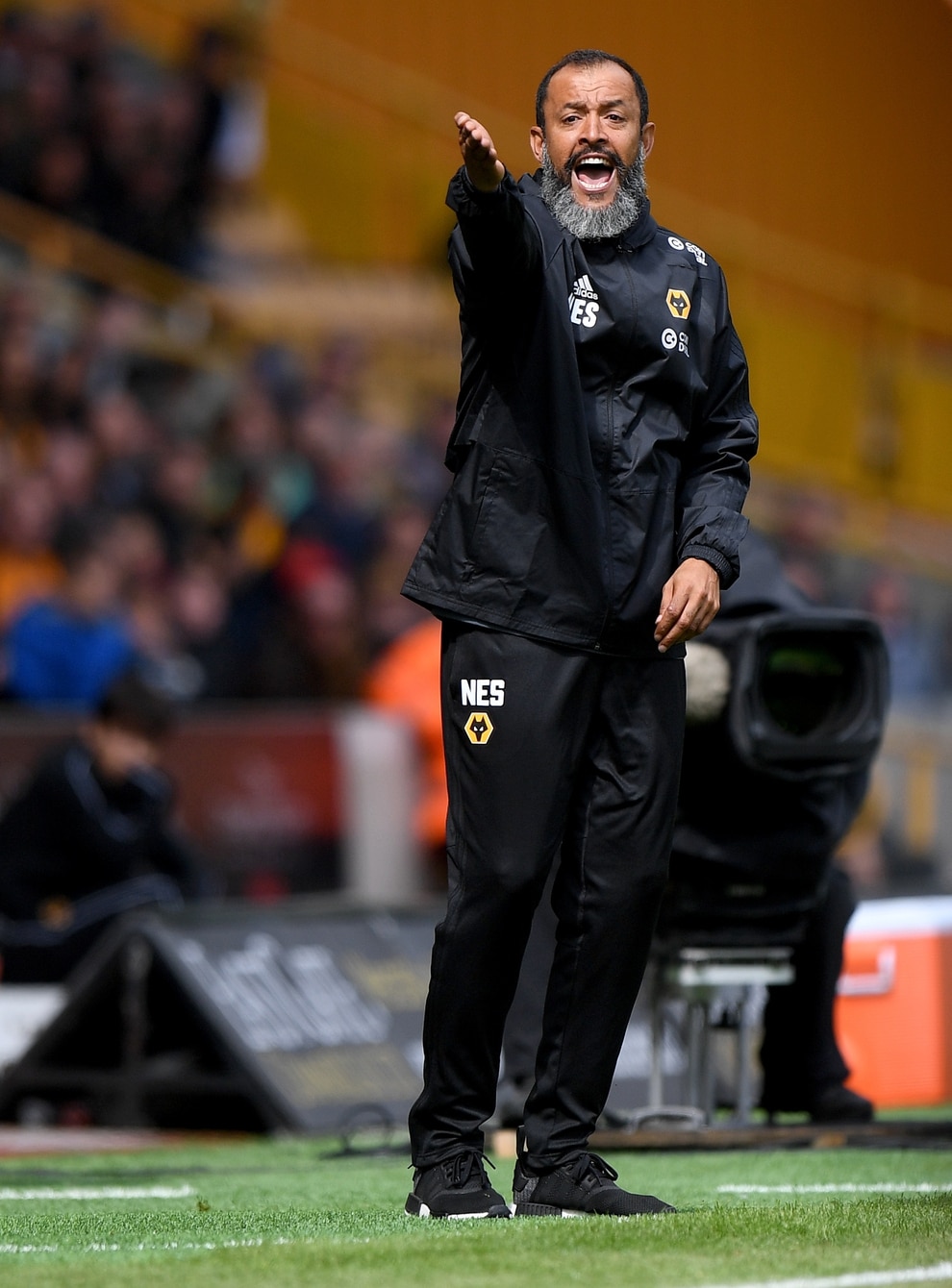 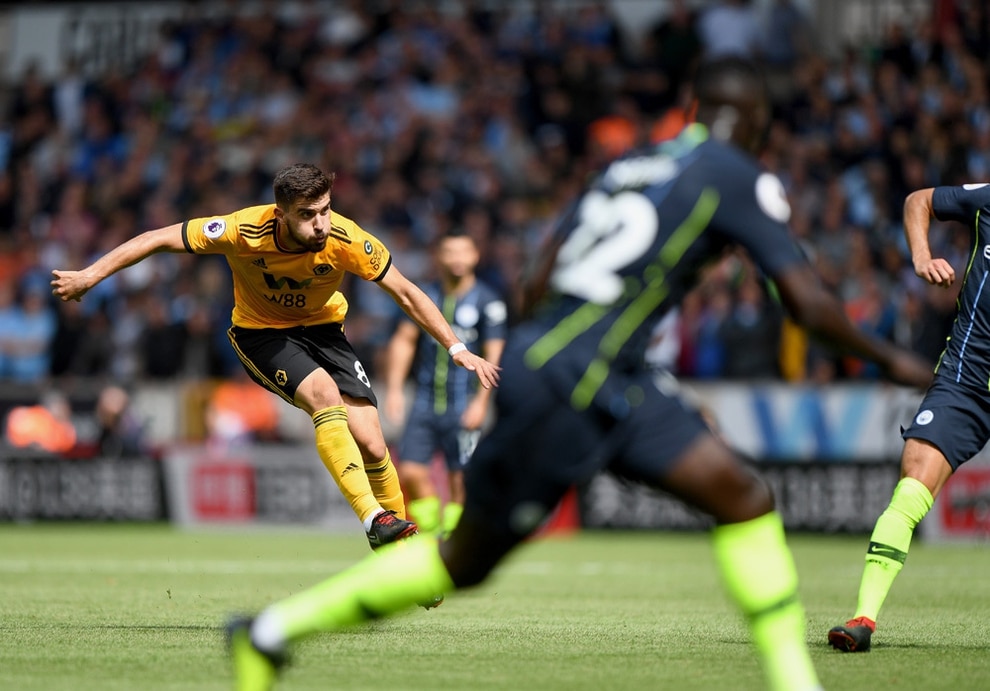 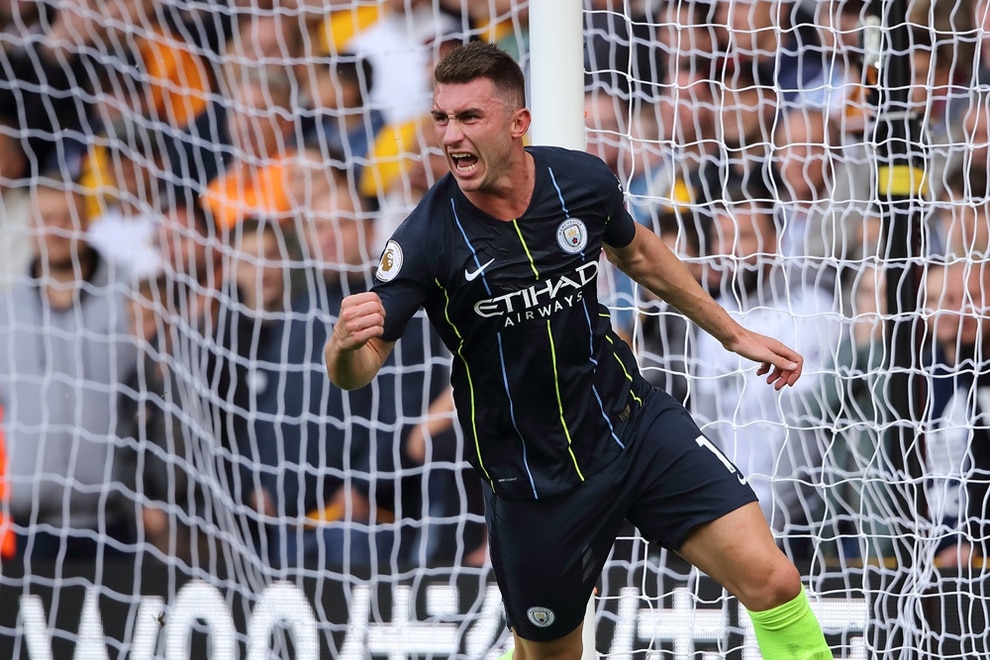 Aymeric Laporte of Manchester City celebrates after scoring a goal to make it 1-1. (AMA) 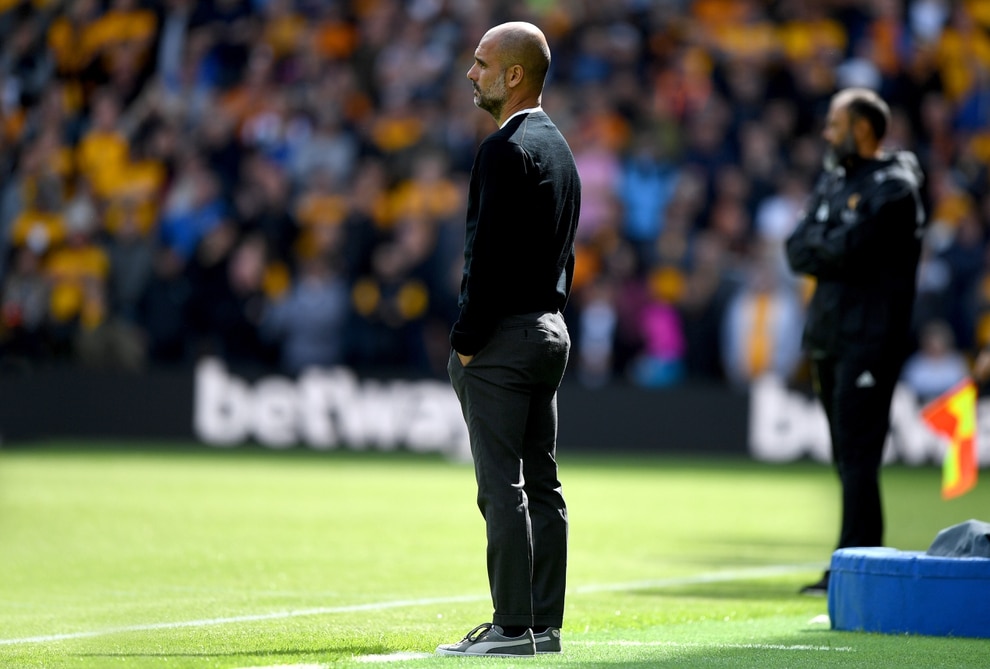 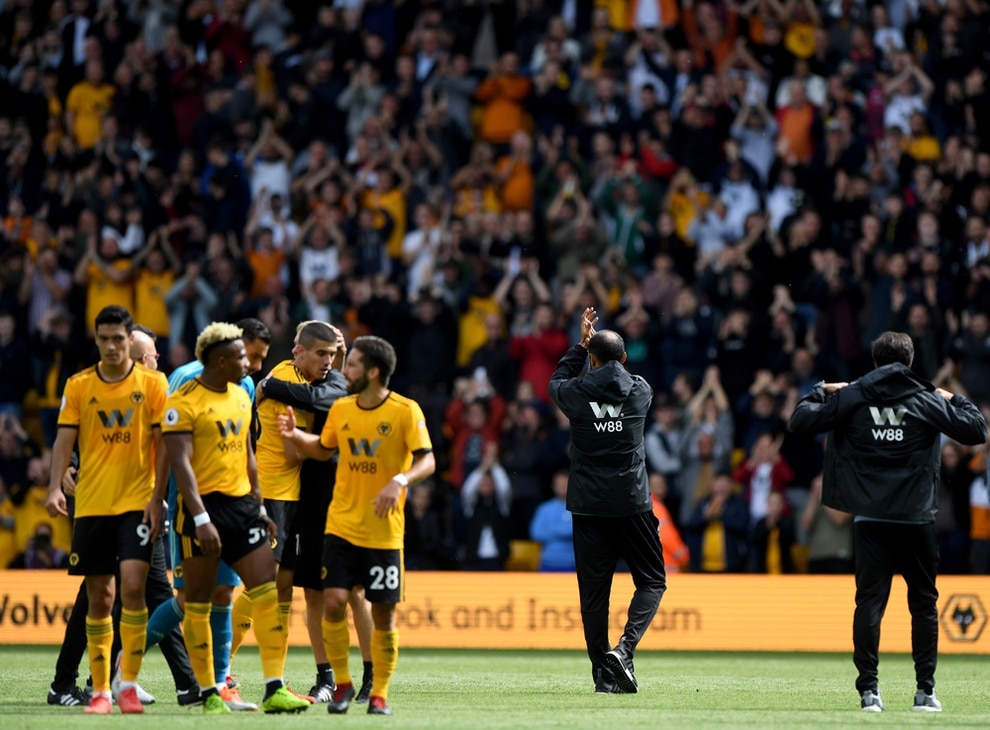 Nuno Espirito Santo's team had the ball in the net after 20 minutes but Raul Jimenez was correctly flagged offside and then City hit the post twice in two minutes, through Sergio Aguero and Raheem Sterling with the latter denied by an unbelievable Rui Patricio save.

Boly gave Wolves the lead on 57 minutes when he diverted Matt Doherty's header into the corner – and appeared to handle as he did so.

Aymeric Laporte equalised 12 minutes later with a bullet header from Ilkay Gundogan's free kick and despite chances for both teams it stayed 1-1.

They had effortlessly brushed aside Chelsea (in the Community Shield), Arsenal and Huddersfield in the past three weeks – but they couldn't defeat wholehearted and unshakeable Wolves, writes Tim Spiers at Molineux.

Nuno's team were 12/1 with the bookies to win this, but they came close to pulling off mission impossible on an afternoon to warm the heart.

Wolves were bold, they were brave, they were oh-so committed and they gave one of the best teams in world football a proper scare, lapped up by Molineux's biggest crowd since 1981 (again).

Nuno's team weren't given a prayer of laying a glove on City by many. Their line up cost an eye-watering £402m to assemble – with a further £207m on the subs' bench to total £609m. In comparison Wolves' 18 cost £86m – a huge amount by their own standards but nothing compared to City.

Yes they earned their luck here – City hit the woodwork three times and Willy Boly's goal clearly went it off his hand – but that made up for last weekend when they were on the end of some rotten misfortune at Leicester.

It was the champions against the champions and Wolves, after some opening-day nerves, looked much more like their confident selves at fortress Molineux.

There was absolutely no bus parking to speak of – they took the game to City, attacked whenever possible in big numbers and caused more problems for their prestigious opponents than many established Premier League teams managed last year, or so far this season.

The back line were superb to a man, Rui Patricio pulled off a stupendous save, Joao Moutinho was the classiest of class acts in midfield and Helder Costa, Diogo Jota, Raul Jimenez and Adama Traore occasionally ran City's superstars ragged. They were smart with the limited possession they had and kept City's space to a minimum.

It was a performance to be proud of and boy did a record crowd for the rebuilt Molineux lap it up.

They may not have won, but this felt like Wolves announcing themselves in the Premier League.

Nuno kept faith with the same XI that lost 2-0 at Leicester, meaning £18m club record signing Adama Traore had to again settle for a place on the bench. Fellow new boy Leander Dendoncker wasn't involved despite Nuno's suggestion on Friday that he could be.

Manchester City, fresh on the back of convincing victories over Arsenal (2-0) and Huddersfield (6-1), made two changes with England World Cup players Kyle Walker and Raheem Sterling replacing John Stones and Gabriel Jesus, meaning a switch from 3-5-2 to a fluid 4-3-3.

Nuno insisted pre-match that Wolves wouldn't change their approach no matter who the opposition – and he stayed true to his word.

What followed was a full-throttle first half full of positive intent from the home side, whose whole-hearted approach caused City more than a few problems.

They gave as good as they got, rode their luck a touch but earned the goalless scoreline at half time.

City's threats came from all over the pitch with left-back Benjamin Mendy as effective as world class striker Sergio Aguero.

But a tried and tested back three of Ryan Bennett, Conor Coady and Willy Boly kept City at bay with a herculean effort of disciplined positioning, smart covering and last-ditch tackles.

Boly provided two of the latter to brilliantly prevent Aguero and Bernardo Silva from having clear shots from 15 yards out.

Bennett produced a vital challenge on Sterling and Coady swept up on a number of occasions to quell City's tidal wave.

Wolves were also indebted to Rui Patricio for a quite breathtaking fingertip save to push Sterling's 25-yard half volley onto the post.

That was the third heart-stopping moment in three minutes as the game came to life from the 20-minute mark. The tireless workhorse Raul Jimenez – who displayed more energy than the Duracell Bunny on TUEs – had the ball in the net from Jota's cross in a two-on-two but was correctly flagged offside and then Aguero placed an effort onto the upright just seconds later.

Patricio had earlier saved from Ilkay Gundogan who incorrectly chose to shoot towards the near post when well placed, in what was City's other big sight of goal.

At the other end Ruben Neves attempted two of his trademark wondergoals with long-range efforts that packed a punch but not enough accuracy.

Wolves incessantly closed down their opponents, causing a fair few mistakes, in what was an encouraging performance of heart, desire, work ethic and no little skill from Nuno's boys.

Costa in particular was impressive, repaying Nuno's faith with a series of energetic bursts down the right flank that put Mendy on the back foot.

City had dominated possession but there was no bus parking from Wolves and their fans gave them a standing ovation at the break.

The visitors continued that control of possession in the opening 10 minutes of the second half – Wolves could barely get out there own third – but then a moment of magic from Costa changed the face of the match.

He scampered clear of both Kompany and Laporte to race through on goal – he should have scored but tried to round Ederson who blocked his shot...however from the resulting corner Wolves took a shock lead.

Moutinho played it short, it came back to him and his whipped cross was skimmed by Doherty and bundled over the line by Boly, who appeared to use his hand.

It was the slice of luck Wolves needed against the might of City, who sent on Jesus for Bernardo Silva in response.

Wolves were finding more space on the counter now and Jota was in a great position in the City box...but a heavy touch saw him pushed wide and Neves drove the resulting 20-yarder wide.

Just a couple of minutes later it was 1-1 in the blink of an eye...Neves tripped Sterling just outside the box and Gundogan curled the free kick onto the head of Aymeric Laporte whose bullet header was too good for Patricio.

On came Traore for the impressive Costa, with 18 minutes left on the clock but City continued to dominate and Jesus should have scored from six yards but put his header too close to Patricio.

It looked like the game was petering out – but Traore injected life into it with a couple of barnstorming runs, riding challenges and delivering crosses from the right. One was half volleyed just over by Jota and the other was desperately cleared by Kompany as Wolves rallied.

It typified their bold approach, which more than earned them a hard-fought point that was loudly cheered at full time.

15 – Aguero nods to Gundogan who's in a great position but picks the near post with his shot and Patricio saves.

It's Sheffield Wednesday away in the Carabao Cup on Tuesday night before a league trip to West Ham United next Saturday.

Ghislaine Maxwell to appear in court on bail application