Wolves became champions of the Championship after thrashing Bolton 4-0 at the Macron. 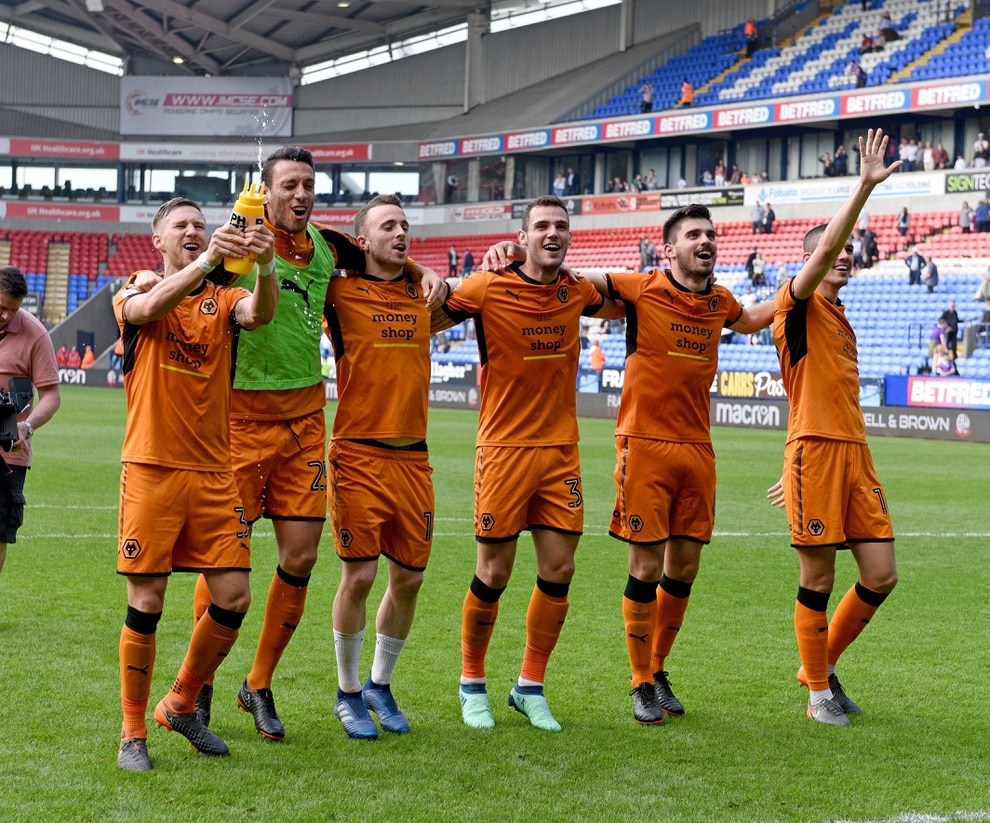 Celebration time at the final whistle. 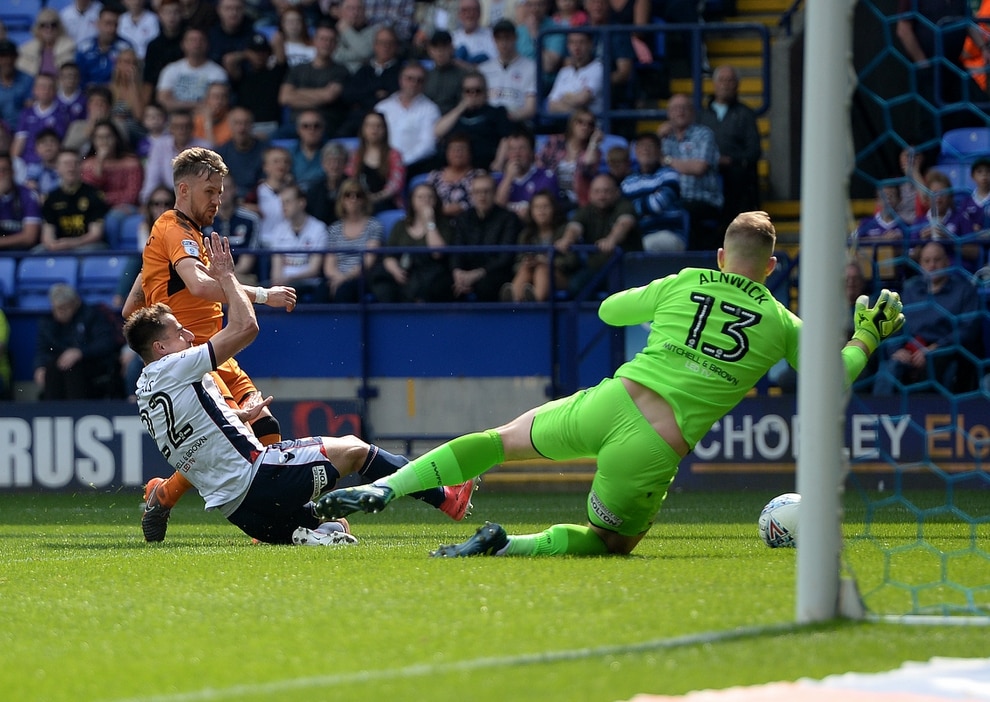 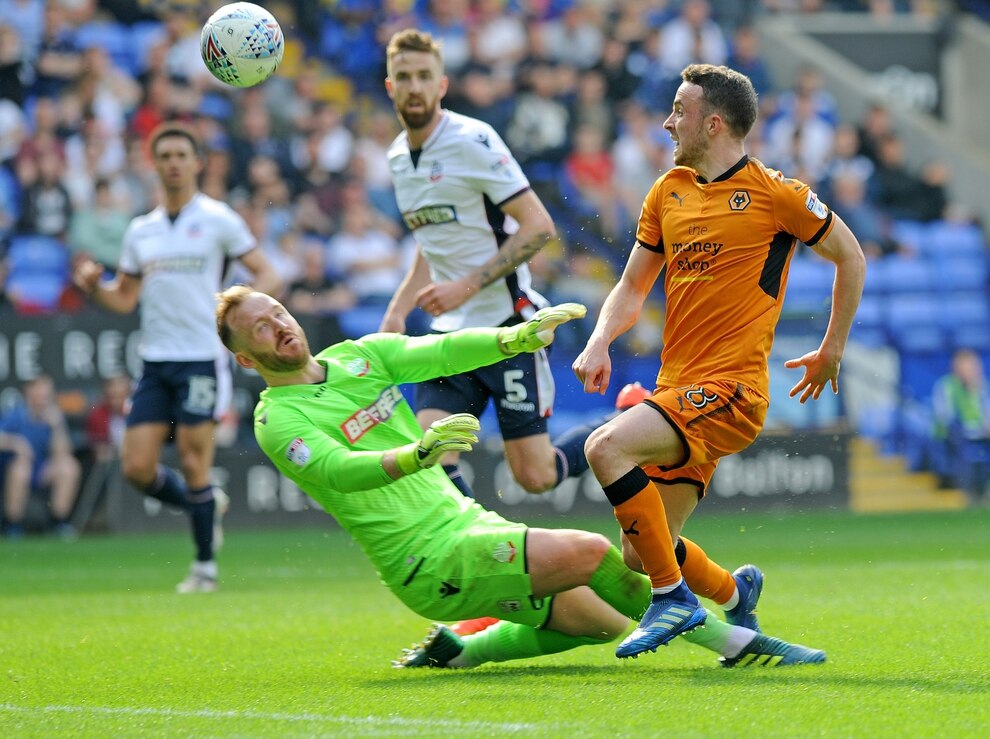 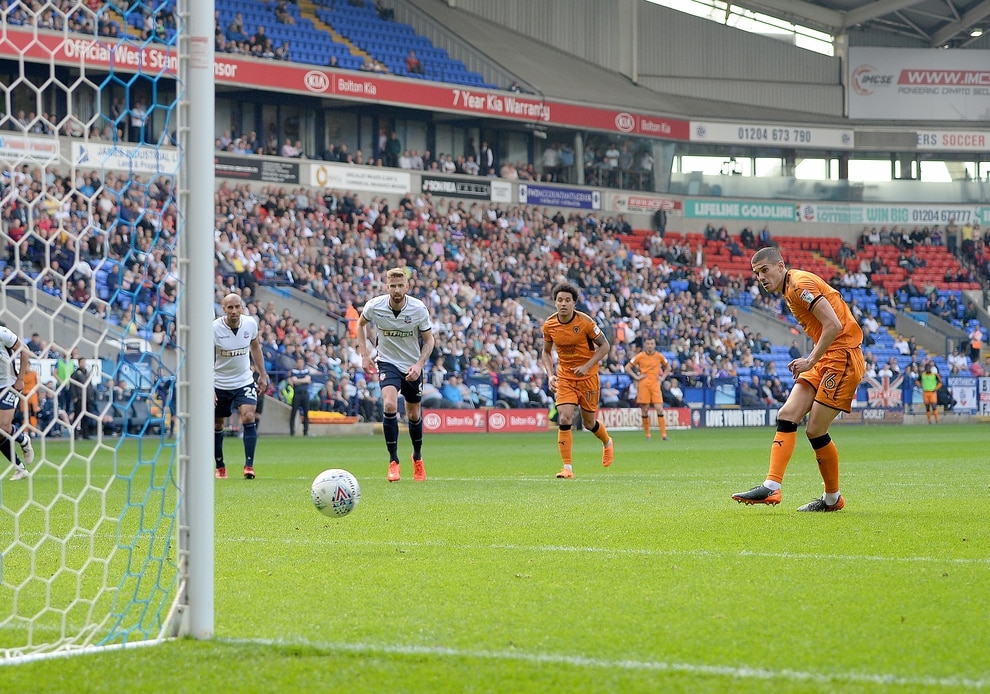 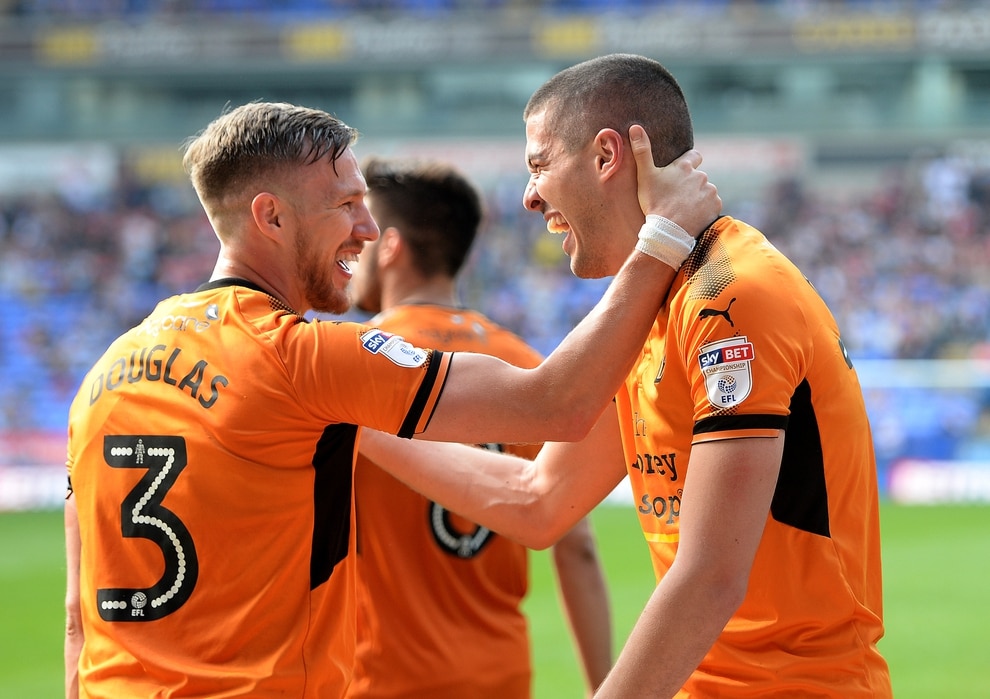 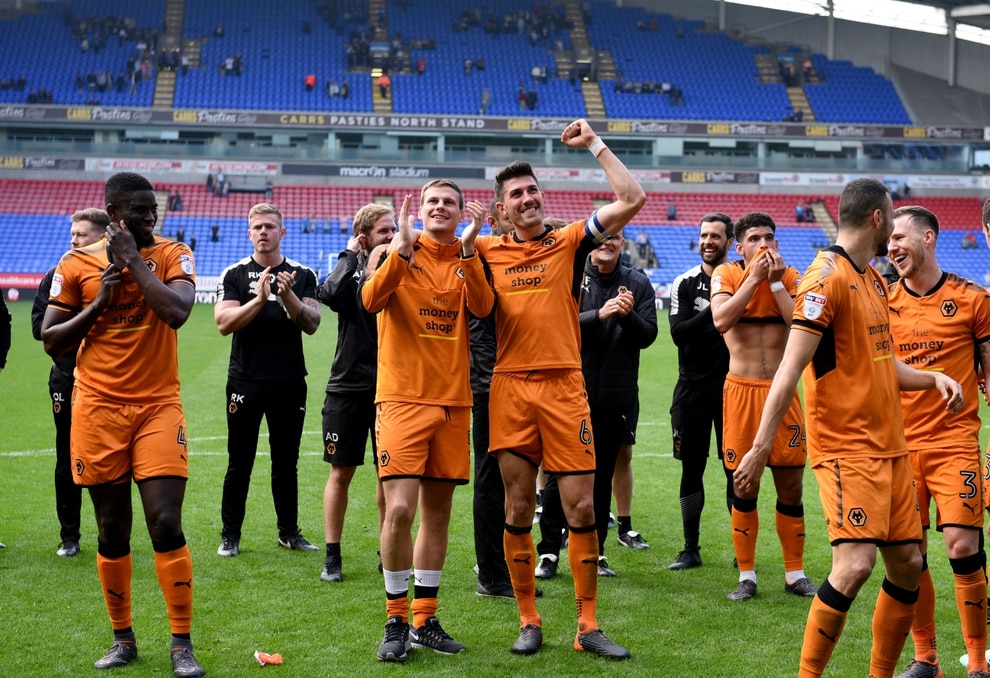 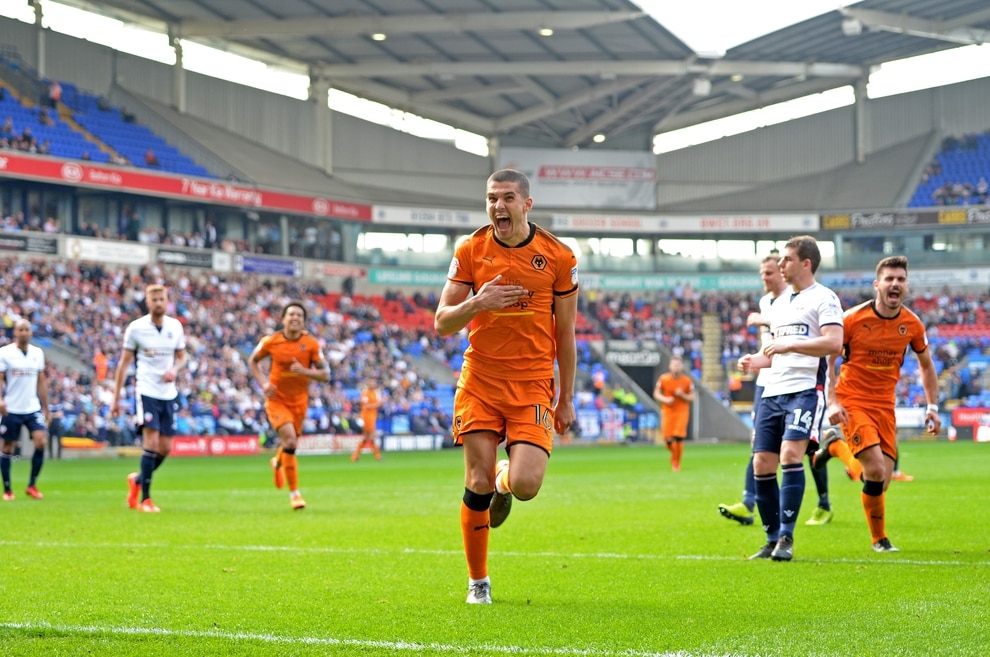 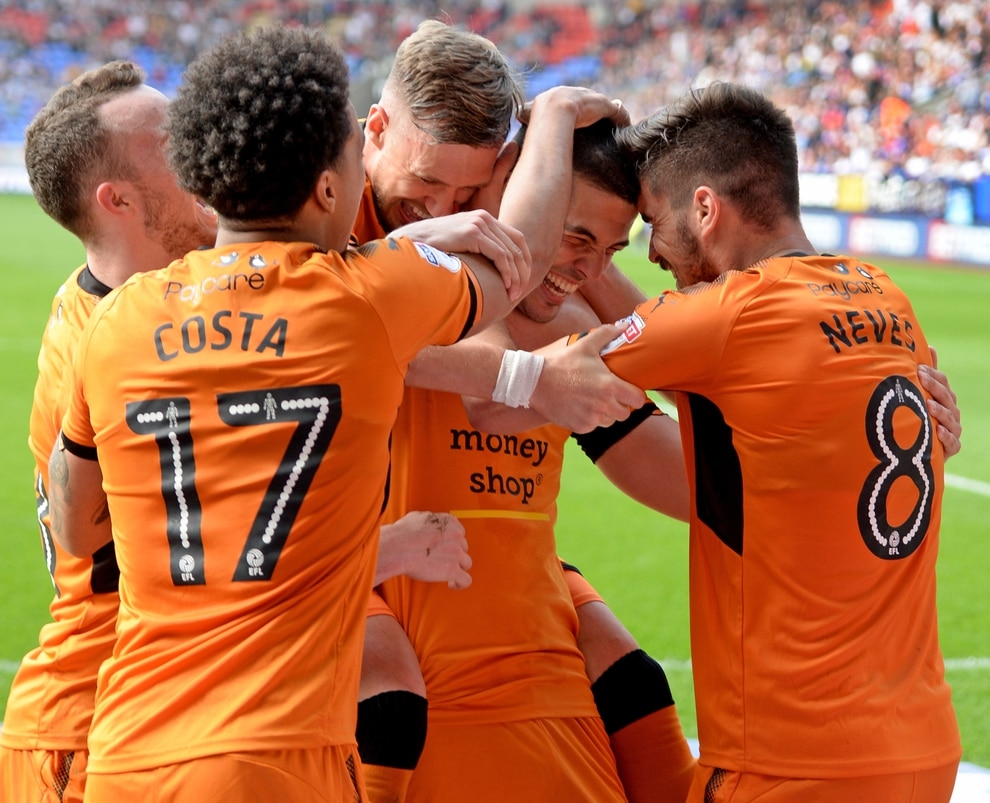 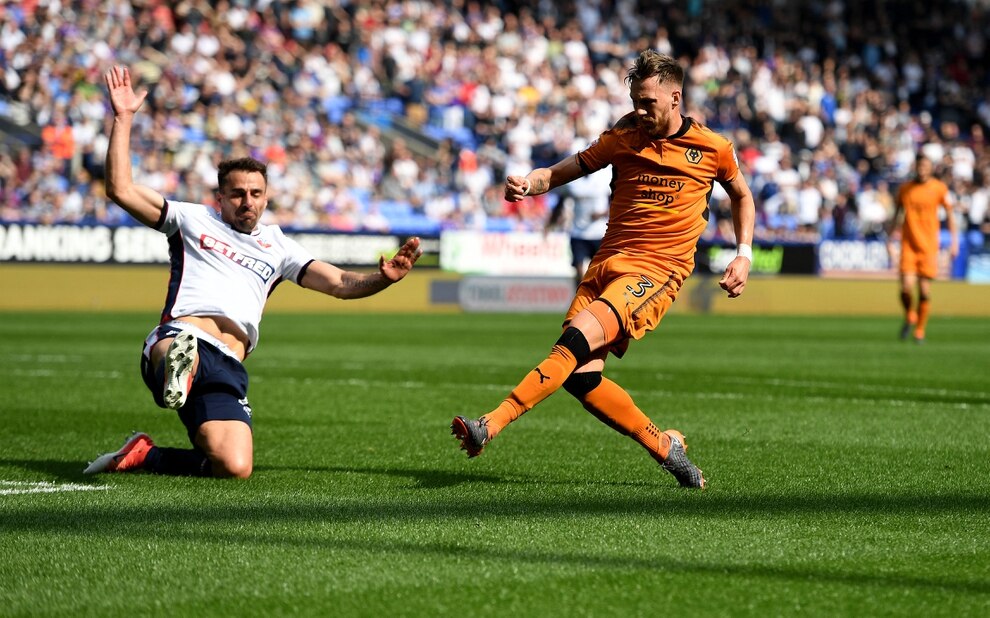 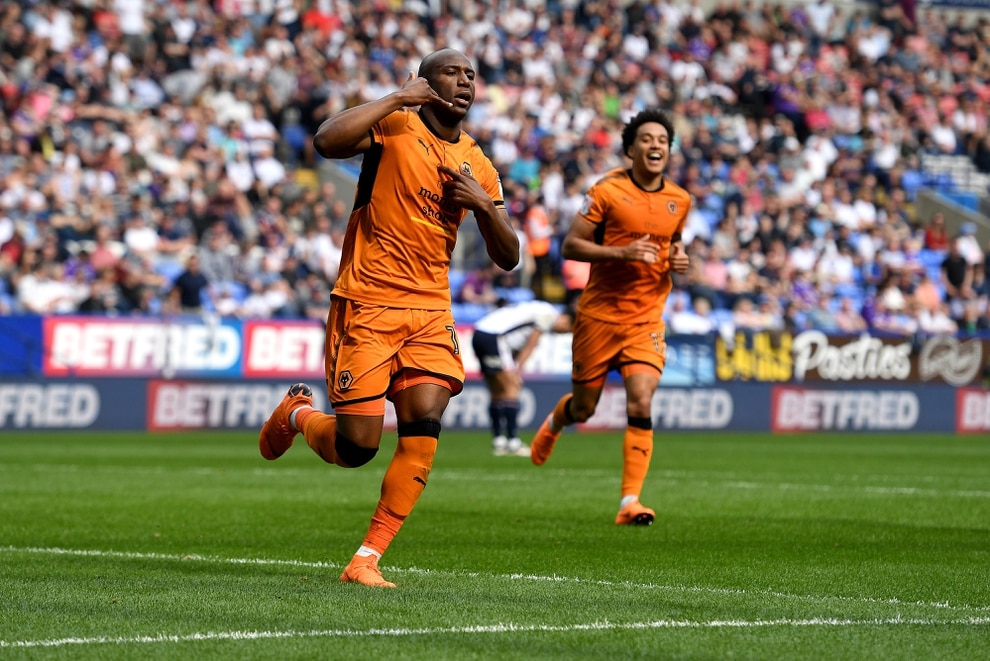 Barry Douglas gave Wolves an early lead when he slammed home a rebound from Benik Afobe's shot and on the stroke of half time it was 2-0 when Afobe took Conor Coady's raking pass and rounded the keeper.

Diogo Jota sealed the win shortly after the break when he received Helder Costa's pass and dinked over the keeper.

And it was topped off when Conor Coady stepped up to score a penalty for his first goal of the season and complete a 4-0 rout.

Wolves are one of the finest teams the second tier - and here they proved it in some style.

Any notion of them taking their eye off the ball after securing promotion last week was quickly dispelled as they set about dismantling Bolton piece by piece, writes Tim Spiers at the Macron Stadium.

Far from clinching the Championship title by labouring over the line, they produced some of their most dynamic football of the season.

Bolton will be sick of the sight of Nuno Espirito Santo's team having been thrashed 5-1 by them earlier in the campaign. Wolves hope, in the nicest possible terms, that they won't be facing the Trotters again for some time.

Here they attacked with the flair, pace and creativity they've become renowned for, with the brilliant Helder Costa in particular proving far too good for Bolton to handle.

Costa had the Trotters on toast and Diogo Jota was at his flying best too.

The only question was how many would Wolves score. As it was they had to settle for four but it could have been far more on a day when they exerted their sheer class.

As they have shown time and again in 2017/18, they are simply too good for this division.

Nuno made two changes with the injured Ivan Cavaleiro and Ryan Bennett dropping out, although the latter was fit enough for a place on the bench.

In came striker Benik Afobe and club captain Danny Batth for his first appearance since the 4-1 loss at Villa.

Wolves went straight on the attack, showing no signs of any post-celebration hangover as they set about getting the job done.

Helder Costa took Saiss' pass and fired just wide via a deflection inside 60 seconds as Nuno's team set their stall out.

Bolton, as the head coach said in his pre-match press conference, would represent tough opposition especially given their precarious league position and the Trotters played to the strengths in the opening minutes, troubling Wolves via set pieces.

Filipe Morais was their architect with some teasing deliveries. One bounces across the face of goal and wide and another was touched wide by Sammy Ameobi at the far post.

Morais also whistled a shot past the far post after Wolves failed to clear his corner.

Wolves weren't at their best but you could send they were one decent pass away from slicing Bolton open - and so it proved on 16 minutes.

Diogo Jota came deeo and fed Afobe - he placed his shot which was well saved by Ben Alnwick and there was the rampaging Barry Douglas to drive home low and true for his fifth goal of the campaign.

Bolton threatened occasionally but Wolves were clearly the superior team with their pace and movement just too good for the hosts.

Jota headed a Douglas corner at Alnwick and then Costa's shot from a tight angle was well saved by the keeper, with Afobe waiting for a cut back.

However Afobe didn't have to wait long for his moment, with the striker scoring on the stroke of half time.

One of the stars of the season Conor Coady sent a ball over the top which Afobe controlled and then he rounded the keeper to finish with ease for his second goal in two games and a sixth since rejoining the club on loan.

It was party time in the away end as they soaked up the Lancashire sunshine in style.

And talking of style, Wolves won the title in style as they coasted clear after the break and sealed the points.

Costa, who was having a fine game, cut inside and played to Jota whose touch took him close to keeper Alnwick so he cutely dinked it over him to send the travelling army into raptures.

It was now a matter of how many Wolves would score. They were hungry for more and when the fourth arrived it was a truly special moment.

The influential Costa helped create it with an excellent touch before teeing up Afobe, who saw a shot saved and was then brought down in the box.

Afobe, or perhaps Costa or Jota, may have taken the spot kick but instead up stepped the heartbeat of the team Coady, who sent the away end wild merely by picking the ball up.

The centre half coolly despatched the penalty for his first goal of the campaign in front of a delirious away end and ecstastic team mates.

Wolves continued to rampage forward - Saiss curled one just over and the Moroccan also crossed inches ahead of the sliding Morgan Gibbs-White for what would have been another special moment.

There have been plenty of those this season - and there were more at full time when the 5,000-strong army and their heroes celebrated becoming officially the best team in the Championship.

16 - GOAL - Jota plays to Afobe, his shot is saved and BARRY DOUGLAS slams home the rebound.

36 - Costa is in down the right and shoots from a tight angle but it's saved.

45 - GOAL - Coady sends the ball over the top for BENIK AFOBE who rounds the keeper and sidefoots home.

53 - GOAL - Costa cuts inside and passes to DIOGO JOTA who takes a touch and dinks over Alnwick to make it 3-0.

66 - GOAL - Costa tees up Afobe whose shot is saved and then the striker is brought down. Up steps CONOR COADY to lash the penalty in.

78 - Saiss is in the box and plays the ball inches ahead of the sliding Gibbs-White.

Wolves comment: Daniel Podence is the man for Olympiacos clash 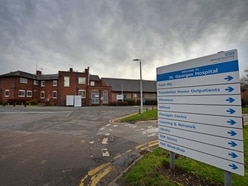 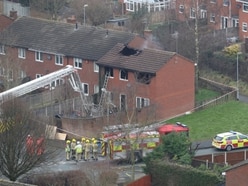 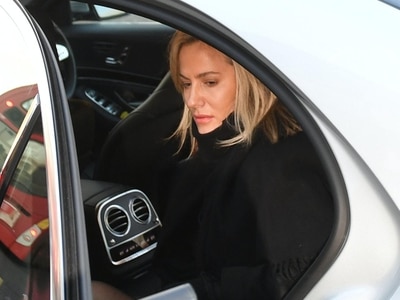