West Brom were praised after the club hit back at a season-ticket holder who called its move to support a campaign after the death of a black man in police custody "pathetic".

The Baggies posted a black image – with the words "Together we are stronger"– as part of Blackout Tuesday to reflect on 46-year-old George Floyd's death.

However its stance was criticised by another Twitter user, who said: "Pathetic. Cancel my season ticket. Cheers."

It led to the Championship club hitting back by posting "You won't be missed" in response – leading to praise from fans.

The club was home to footballing icons Cyrille Regis MBE, Brendon Batson and Laurie Cunningham who battled prejudice and discrimination during their careers.

The beloved teammates, well-known as The Three Degrees, were remembered with a statue in West Bromwich unveiled last year.

Blackout Tuesday is part of a campaign which calls on people to stand with the black community against injustice and racism.

BBC Radio 1Xtra is hosting a series of discussions and debates in support of the black community, with song choices that reflect black pride and identity.

And many record labels and music stars have gone quiet to observe the initiative.

Radio 1 DJ Clara Amfo held back tears as she revealed that she missed her show on Monday over the death of George Floyd.

The London-born presenter, who has Ghanaian heritage, said her mental health had been "in a really bad way" over the weekend.

She told viewers she had been left crying, angry and confused by the events surrounding Mr Floyd's death.

Mr Floyd, who was African-American, died last week after a white Minneapolis police officer knelt on his neck for several minutes.

His death has prompted public figures and organisations from the worlds of arts and entertainment to take part in a "blackout" on Tuesday, as the US continues to be gripped by unrest.

Amfo, 36, said: "As you know at Radio 1 we talk about a lot about mental health and mine was in a really bad way yesterday.

"In fact it has been for the past few days, in particular in relation to the death of George Floyd.

"George Floyd, an unarmed black man, who died whilst being held under arrest.

"Now, I didn't have the mental strength to face you guys yesterday to ask: 'Hi, how was your weekend?' like I usually do with my happy intention, because I know that my weekend was terrible.

"I was sat on my sofa crying, angry, confused and also knowing..."

After a lengthy pause, she added: "Stuck at the news of yet another brutalised black body."

Holding back tears, she continued: "Knowing how the world enjoys blackness and seeing what happened to George, we - black people - get the feeling that people want our culture but they do not want us.

"In other words, you want my talent but you don't want me.

"There is a false idea that racism, and in this case anti-blackness, is just name-calling and physical violence, when it is so much more insidious than that."

Amfo read a quote from US performer Amanda Seales, which said: "You cannot enjoy the rhythm but ignore the blues."

Addressing her listeners, she said: "I want to say to our black listeners, I hope you feel seen and heard today.

"And to those of you that already let me know you are doing the work to be committed to doing better, I see you, so let's do this. Let's all be anti-racist."

Earlier in the day Amfo joined the "blackout" by sharing an image of a black box on her Instagram account, asking her followers to "really take some time to think about the impact black people and our essence have had on your life". 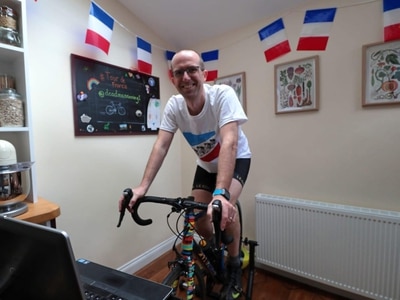