"It's an absolute dream come true. I dare not think what it would be like if we won."

"It's an absolute dream come true. I dare not think what it would be like if we won."

These are the words of Gnosall resident Jean Gough - daughter of Sir Stanley Matthews - ahead of Saturday's FA Cup Final showpiece between Stoke City and Manchester City at Wembley.

Matthews - the only player to have been knighted while still playing - made his Stoke City debut as a raw 17-year-old right winger against Bury in 1932.

During his career he was regarded as one of the greatest players ever to grace the English game and marked the beginning of the first so-called "celebrity" player. This was despite earning £20 a week - a fair amount then.

For Jean Gough, 72, her 45-year-old son Matthew, and 12-year-old grandson Cameron, attending the FA Cup will be a special time.

Mrs Gough's last appearance at an FA Cup Final came as a 14-year-old schoolgirl at the 1953 showpiece - now termed the "Matthews" final - for her father's classy performance for Blackpool.

Blackpool - another of Stanley Matthews' former clubs - were playing Bolton Wanderers that day. It was a match to remember, she recalls.

"Blackpool were 3-1 down to Bolton but ended up winning 4-3. We were just all crying by the end."

Saturday's final will be a family affair - but not one marked wearing Stoke's colours.

"Whenever we've worn them in the past, we've never had good luck" she said. The club's only major silverware was the 1972 League Cup triumph.

"The final is going to be so exciting. Stoke have done so well in the league this season and that has lifted the area.

"Stanley use to say the people were so warm and friendly."

Saturday could also be vital for Blackpool - another of Sir Stanley's teams - who hope to avoid relegation from the Premier League.

"I really hope they do it" said Jean. "I think they will."

The statisticians will talk of how Stanley Matthews played 262 times for Stoke City between 1932 and 1947. He notched 51 goals.

This was followed by 14 years with Blackpool - 380 games and 17 goals - before a return to the Potteries.

His second spell at Stoke City saw him play another 59 games.

But he wasn't just any old chip-off-the-old-block.

Sir Stanley made his England debut as a 19-year-old in 1934 and played his last game for his country almost 23 years later at the age of 42.

Dubbed as the "Wizard of the Dribble", his trademark style involved moving towards the full-back with the ball seemingly glued to his feet. His opponent would be lured into a challenge, whereupon Matthews would nick the ball away and be off down the wing thanks to a lightning change of pace.

Mrs Gough - who is married to Robert, 65, - regularly attends the Britannia Stadium and is a big fan of manager Tony Pulis.

Growing up in the shadow of England's finest offering of a true winger, was something Jean revelled in.

As a youngster she took her father's fame in her stride. "Everybody loves their Dad and I was no different. But lots of people would recognise him.

"Not only did he keep out of the limelight but he was so dedicated to the game. 'Pops' was very strict but funny too.

"He would be thrilled to bits to know his beloved Stoke are playing in the FA Cup Final" she said.

Sir Stanley died 11 years ago leaving behind a wealth of footballing legacy. England has arguably not seen a better winger since.

The Stoke-born legend has three grandchildren and seven great-grandchildren. It turns out sport runs in the family.

Jean's brother - Stanley junior - was a Wimbledon junior champion while his sister was a hockey and tennis player. Their mother Elizabeth was a golfer.

Another legacy of the man himself is the Stanley Matthews Foundation. Formed in the aftermath of his death, it raises money to encourage young people to take part in sport and to achieve great things within it.

A win for Stoke on Saturday would also be some way to remembering 'Pop'. 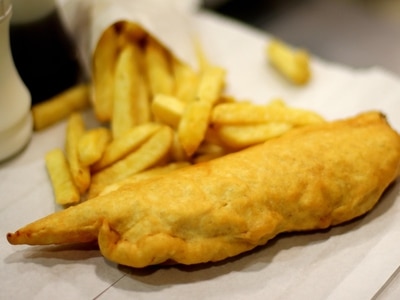 Cod and monkfish under threat from climate change, study warns