Homes were left without power, trees crashed down blocking roads, and services were disrupted as Storm Ciara caused devastation across the region, with gusts of up to 80mph. 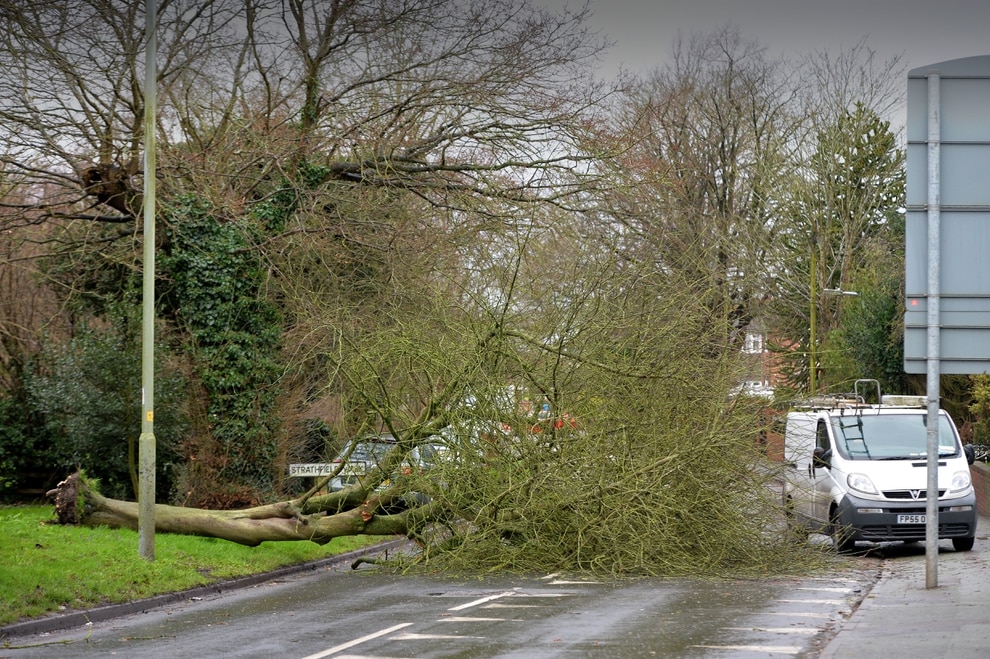 A tree down on Langley Road, Wolverhampton 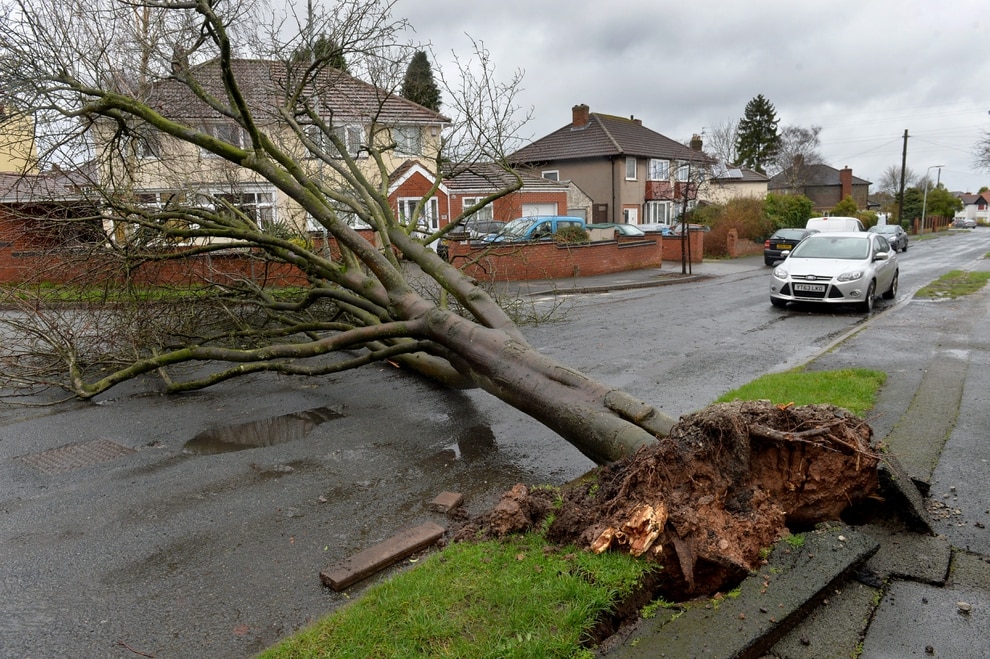 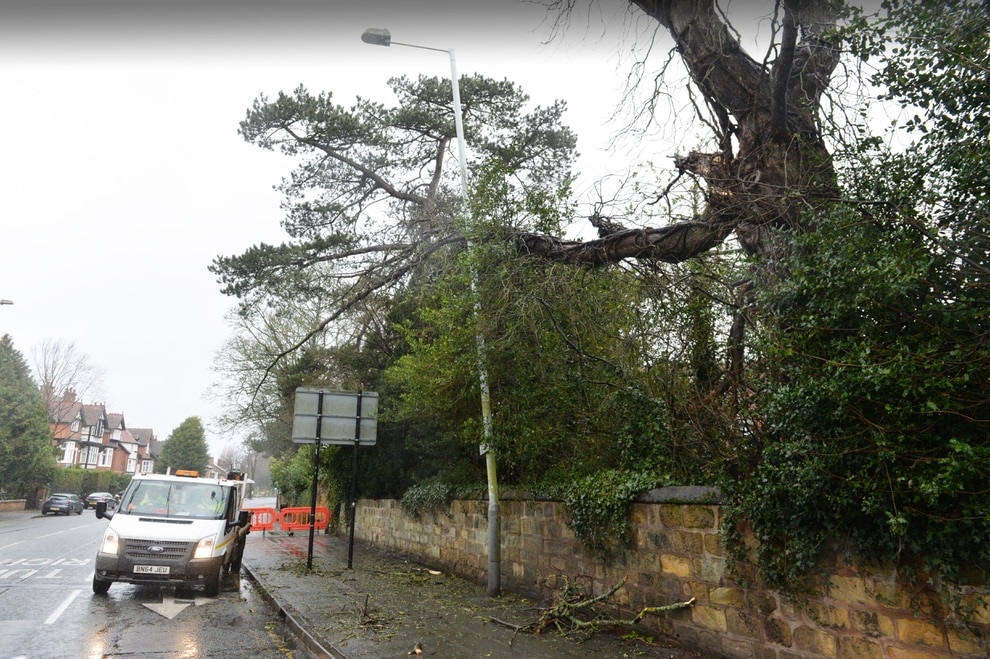 Workmen close off the footpath on Compton Road, Wolverhampton, after a tree branch fell onto a lamppost 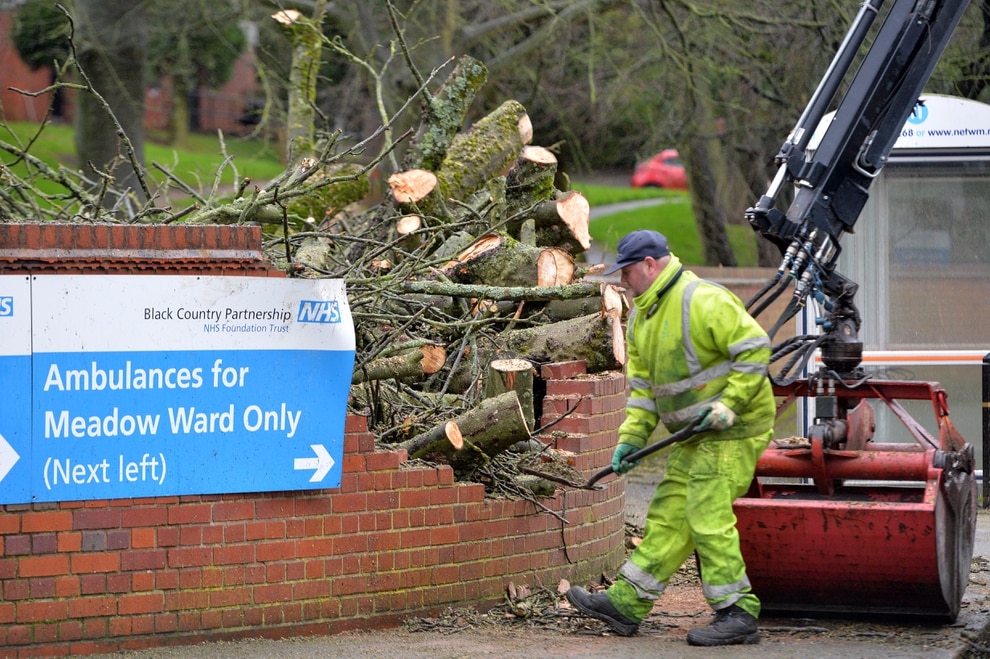 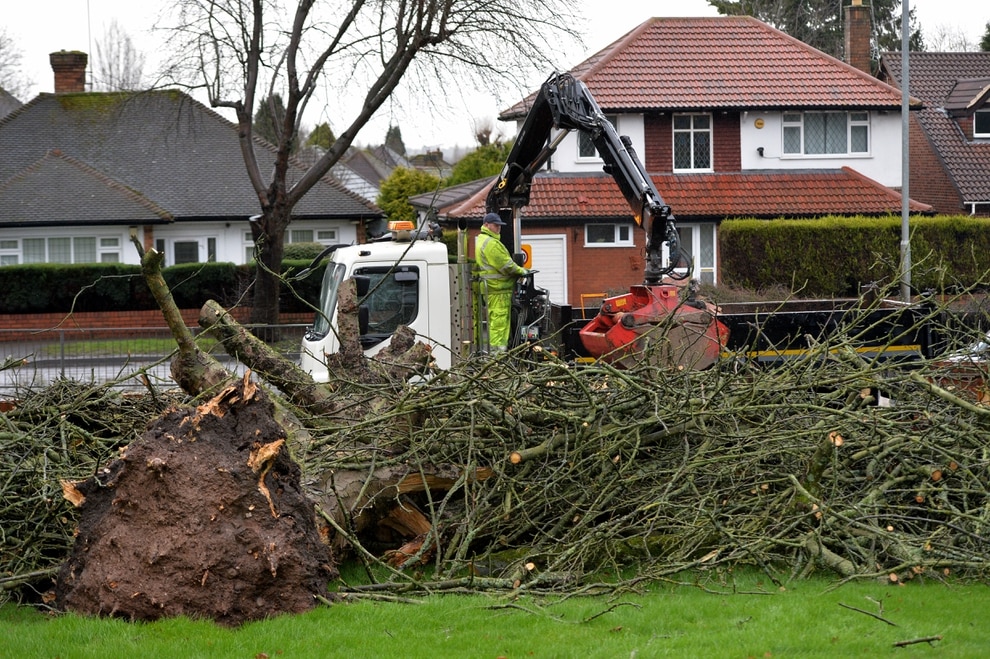 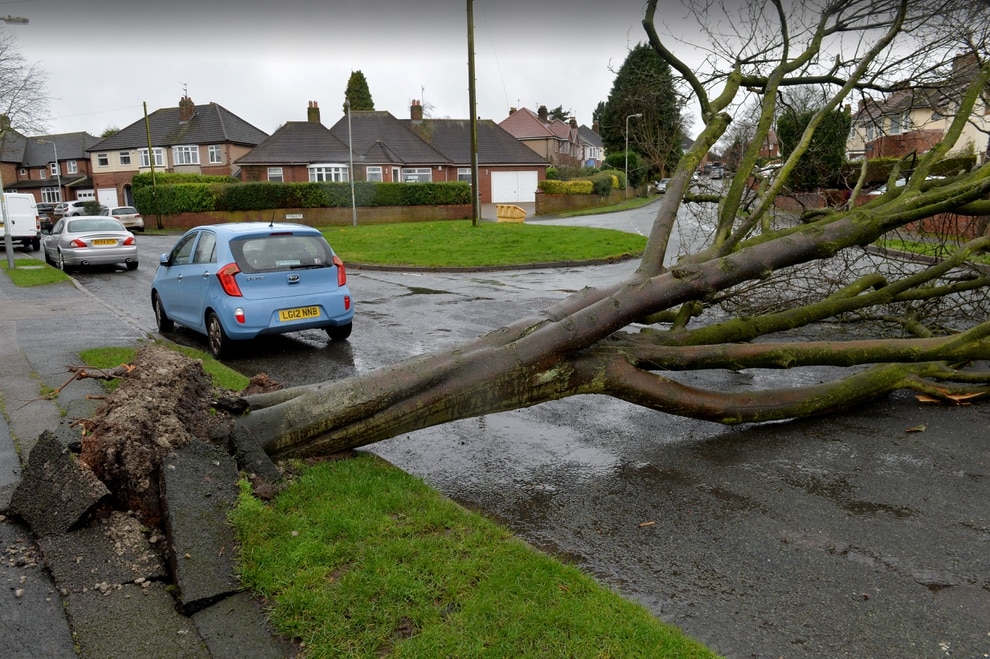 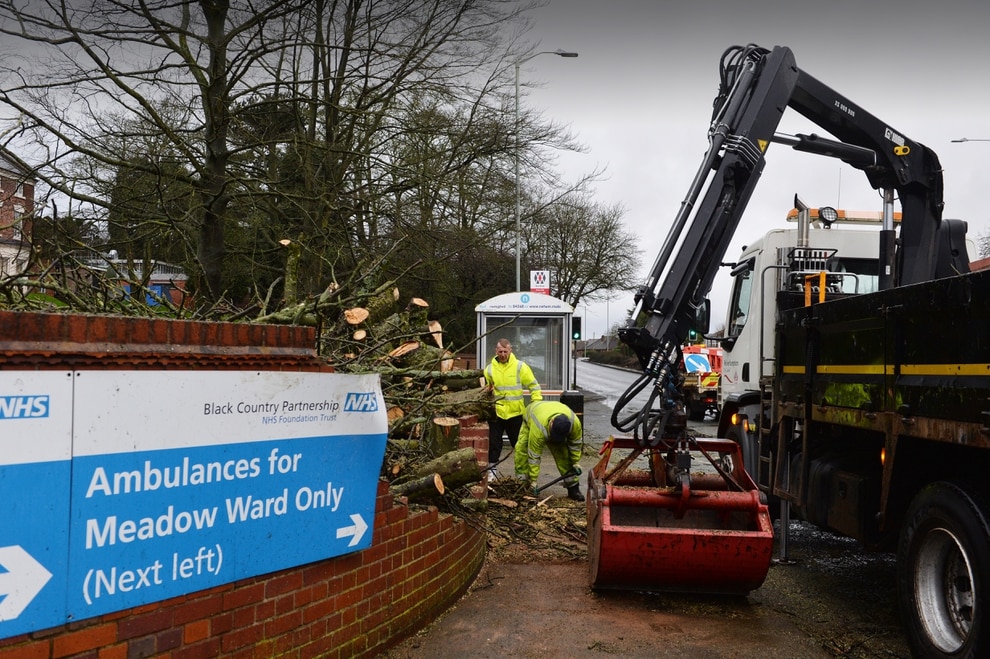 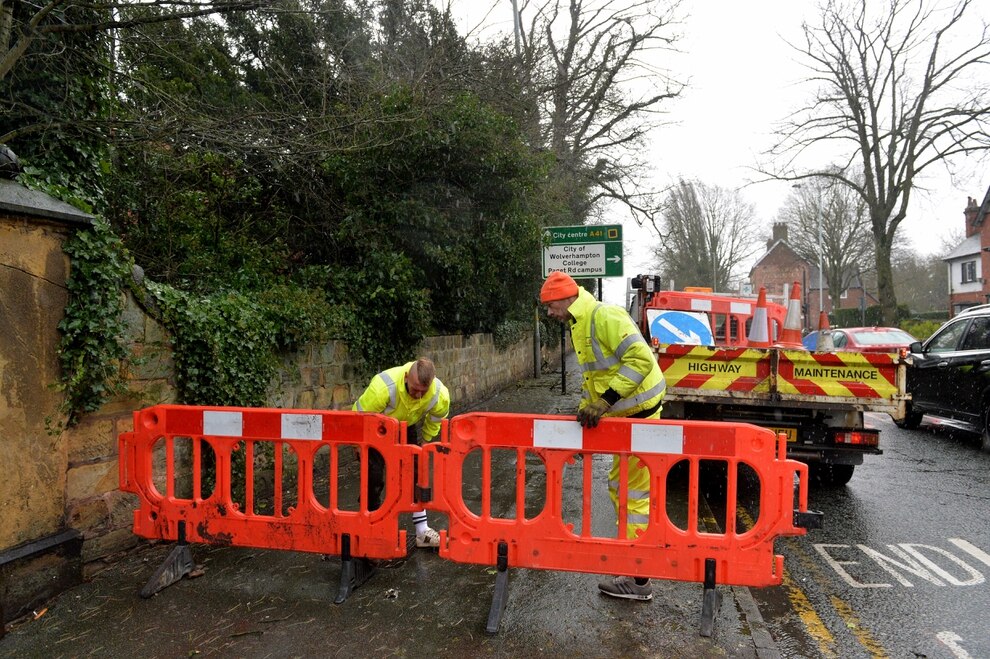 Compton Road, Wolverhampton, after a tree branch fell onto a lamppost 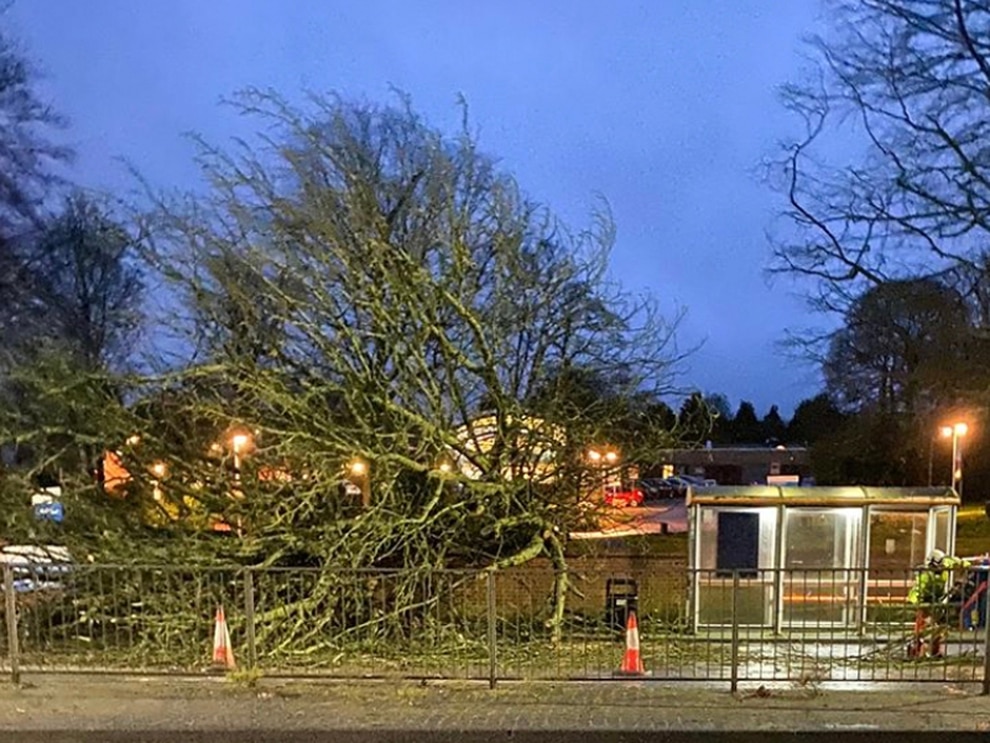 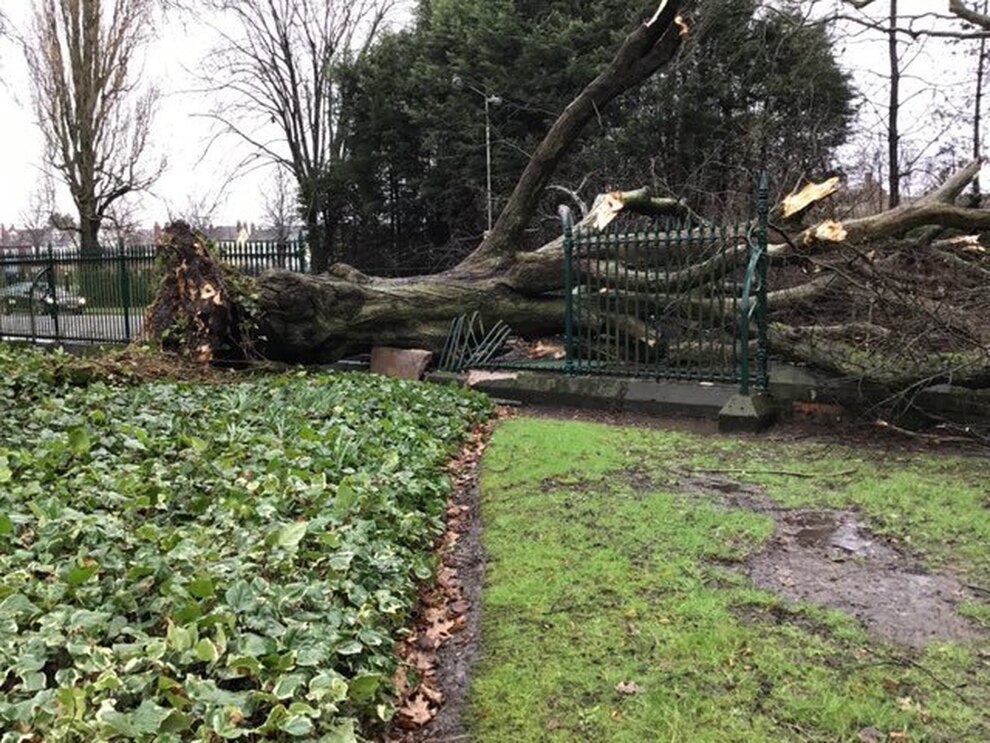 Storm Ciara battered the Black Country and Staffordshire, with people advised to only leave the house and travel if necessary.

Many attractions shut down for the day, events were cancelled, and transport services delayed due to the 80mph winds.

A tree crashed to the ground outside Penn Hospital in Penn Road, Wolverhampton, and there were reports of trees down and storm damage in other areas of the city, including Langley Road, Springhill Avenue, Compton Road, Paget Road, Danescourt Road, Grove Lane and Wootton Road.

Wolverhampton Council has closed all of its parks and a number of cemeteries as it deals with fallen trees. It tweeted: "For the public’s safety all of City of Wolverhampton’s parks will be closed off for the rest of today due to the threat of falling trees caused by Storm Ciara. Parks include Bantock, West, Ashmore, East, Newbridge, Windsor, Hickman, Wednesfield, Claregate and Northycote.

"For public safety, seven cemeteries (Merridale, Bushbury, Danescourt, Bilston, Penn, Hall Green & Beacon Hill) closed for rest of today as precaution against Storm Ciara risk of falling trees within cemeteries or on roads approaching them. Apologies for inconvenience this may cause."

In Halesowen, Illey Lane was blocked by a fallen tree.

Over in Brewood, a tree came down across the tow path on the canal hitting one of the narrow boats.

Traffic was being diverted on the M5 southbound, between junction 7 for Worcester South and junction 8 for the M50 Link because of an unsafe gantry, with delays expected.

In Birmingham, fire crews were dealing with a roof that has been damaged by the storm in College Road, Perry Barr. Crews temporarily closed the public towpath/footpath on the canal at the junction with College Road for safety reasons and urged people to avoid the area.

Hereford & Worcester Fire and Rescue Service said it had been called out to trees and branches falling onto buildings. It said the storm was impacting the Herefordshire and Worcestershire areas and warned motorists to be cautious of fallen branches on roads

West Mercia Police warned: "If you do have to go out today please take extra care. If driving reduce your speed and keep your distance from the vehicle in front. Drive carefully & watch out for any debris."

Dudley Zoo has taken the decision to close due to stormy weather conditions, saying on social media staff were "sorry for the inconvenience".

It said: "Important information. Due to the current weather conditions we have taken the decision to remain closed today for the safety of our visitors, animals and staff. We are sorry for any inconvenience this will cause."

Black Country Living Museum has also closed for the day, with a spokesman saying: "The UK Met Office has issued a severe weather warning for high winds and gusts for Sunday.

"Therefore, for safety reasons, the museum will be closed on Sunday. We will reopen on Wednesday at 10am in line with our regular winter opening hours."

The National Trust's Shugborough property, outside Stafford, was also closed for the day. A tweet said: "Please note that we’ll be closed today due to the high winds. We’ll be open again at 10am tomorrow. Sorry for any inconvenience this may cause."

Walsall Ladies FC have postponed today's match against City Of Stoke because of the storm.

Trees and power lines were brought down Shropshire, with roads flooded as well.

Forecasters have warned flying debris could lead to injuries or endanger lives.

Officials also warned of possible damage to buildings and the chance of power cuts.

Yellow weather warnings cover the whole UK, with the heaviest rain expected over high ground, where 50-70mm is expected widely with as much as 100mm in a few locations.

People have been advised to only travel by rail if necessary, with customers choosing not to travel encouraged to apply for a free refund.

National Rail said: "Storm Ciara will disrupt train services across the country today. Some train operators are advising not to travel."

West Midlands Railway has imposed a 50mph speed restriction across all networks on Sunday due to gusts of up to 80mph.

It said services would be reduced and urged passengers so leave extra time to complete journeys and to check the service before they travel at wmr.uk/plan

This afternoon West Midlands Trains said that following a number of storm-related incidents across the network, both it and Northwestern Railway were advising passengers not to travel today.

It said: "Incidents including flooding and fallen trees have led to the temporary closure of a number of sections of track across the country.

"The impact of these closures is causing extensive disruption to journeys, particularly around Birmingham New Street, and passengers are advised not to travel.

"As of 2.30pm, trains are not able to run on the following routes:

"Services will continue to run where possible to ensure as many passengers as possible already on the network can complete their journeys.

"Tickets purchased for travel today will be accepted on WMR and LNR services tomorrow (Monday)."

Transport for Wales has already cancelled trains on the Heart of Wales line, the Cambrian line and between Shrewsbury and Birmingham International which were due to run on Sunday.

The following lines will not have a TfW service operating today:

Avanti West Coast is not running trains north of Preston today until further notice due to the impact of Storm Ciara.

Dozens of domestic and international flights have been cancelled as Storm Ciara batters the UK and Ireland with heavy rain and wind.

Heathrow Airport said it had agreed with its airline partners to “consolidate” Sunday’s flight schedule in a bid to minimise the number of cancelled flights.

British Airways said in a statement: “Like all airlines operating into and out of the UK tomorrow, we are expecting to be impacted by the adverse weather conditions across parts of the UK on Sunday.”

The airline said it was offering rebooking options for customers on domestic and European flights flying to and from Heathrow, Gatwick and London City on Sunday.

Virgin Atlantic has posted a list of cancelled flights on its website. It said it was “contacting affected customers and rearranging their travel arrangements”.

The Environment Agency has issued 22 flood warnings, meaning flooding is expected and immediate action is required, and 149 alerts, indicating flooding is possible.

Today's Manchester City home match against West Ham has been postponed due to “extreme and escalating weather conditions”, City announced.

A Midlands fencing company today said it would repair for free the fences of senior citizen's who couldn't afford to get damage sorted.

Midlands Fencing and Aggregates said: "Today we have received 11 messages already of blown down fences and the weather is here for the rest of the day.

"As we posted last year there are many elderly people who can't afford to repair their fences when they blown down leaving their house un secure and ultimately leaving them worried for their safety due to the level of crime.

"Due to this, we are offering FREE Fence repairs to any senior citizens who are struggling, and have to decide between bills or security. this shouldn't be happening, we will try and get round as many people as possible as fast as possible.

"All I ask is you provide me or one of my team with a cuppa tea and some biscuits. My company is at a size where I can give a little back, and that's what I intend to do. Please spread the word as already I have seen over 10 posts for blown down fences.

"If you have a blown down fence, send us a Facebook message 24 hours a day or fill in our contact form at midlands-fencing.com"