Family of missing Natalie Putt: We will never give up hope

The case of Madeleine McCann is one the nation has become intrinsically familiar with in the 10 years since she disappeared. Her parents Kate and Gerry have become household names through countless TV appearances in their continued hunt for one of the most famous missing children of all time, as documentaries and newspaper investigations regurgitated the events leading up to her disappearance.

Madeleine's face has once again stared up from the front pages of newspapers and appeared on news bulletins to mark the 10th anniversary of a case which piqued the curiosity of a nation.

But as desperate as the McCanns' plight has been, around 100,000 children go missing in the UK every year, many whose stories haven't been told.

There are many other families out there who have been waiting as long or even longer for answers, including that of Natalie Putt from the Black Country.

Natalie mysteriously vanished from her Lower Gornal home in 2003, aged 17, and has never been seen again.

Almost 14 years on, half-sister Rebecca Coggins refuses to give up hope of seeing her again.

"I hope she is living somewhere, is happy and has got her own family," Rebecca said.

"I have to believe that - that she went of her own free will and made her own life because the alternative is just too painful."

The family's life was shattered when Natalie failed to return home, having apparently gone out to the shops.

She left her baby behind, who she had given birth to only 11 weeks earlier. She did not take her mobile phone or any possessions.

Natalie had been out for the night with a friend the day before. She returned home at around 9am and stayed until noon before heading out.

Reported sightings were made of her across the country from Bournemouth to Scotland, but her loved ones are no clearer on what happened to Natalie, who would now be 31.

Police said there was no evidence she was murdered or that she planned to kill herself.

Officers have said from the day she went missing her bank account remained untouched. They said the last communication she made was a voicemail on the day suggesting she was planning to visit friends in Tamworth.

The case was momentarily re-engerised four years ago when, after receiving fresh information, police dug up a paddock in Himley where Natalie kept horses but the search proved fruitless.

As time has gone on, Rebecca, who now lives in Nottingham, says it has gradually become easier to get on with daily life - but offered a tragic glimpse into the torment which grips a family who are left without answers.

"Self-preservation stops you from being so frantic and you adjust - but that doesn't mean she is not thought of.

"I have got her picture upstairs and sometimes I will say 'where are you? Tell me where you are, you don't have to come back if you don't want to'.

She added: "The thought we have missed something, that we haven't looked properly, that someday somebody walking a dog will discover something in the woods is unbearable.

Rebecca says she doesn't think she will ever resign herself to the fact her half-sister will never come home.

She said: "If I did, that is giving up. And then everyone else will give up."

Rebecca does not begrudge the McCanns and their place in the spotlight but believes society views missing teenagers differently to younger children.

She said: "She was a little girl and there was a lot of money ploughed into that.

"If they are over the age of 12 or 13 people seem to think they have done a runner." 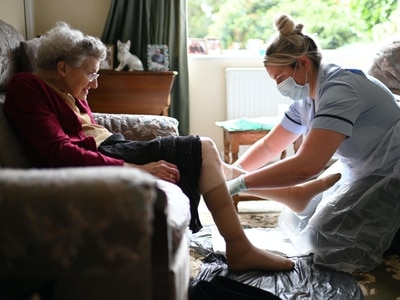