Man stabbed to death after car rammed into Chinese takeaway

A man was stabbed to death after a van rammed a car into the front of a Chinese takeaway. 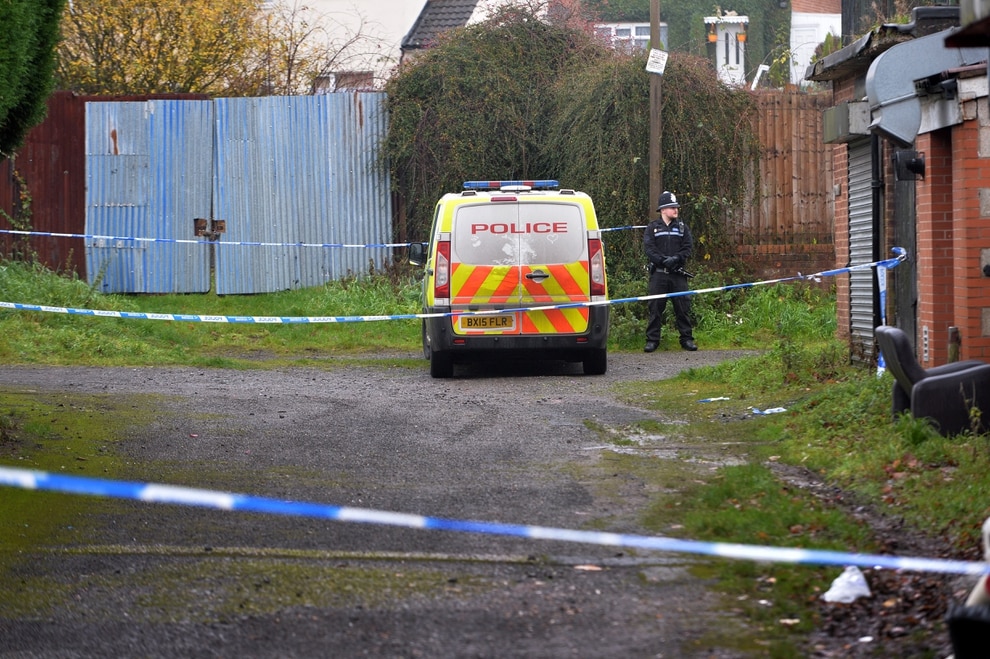 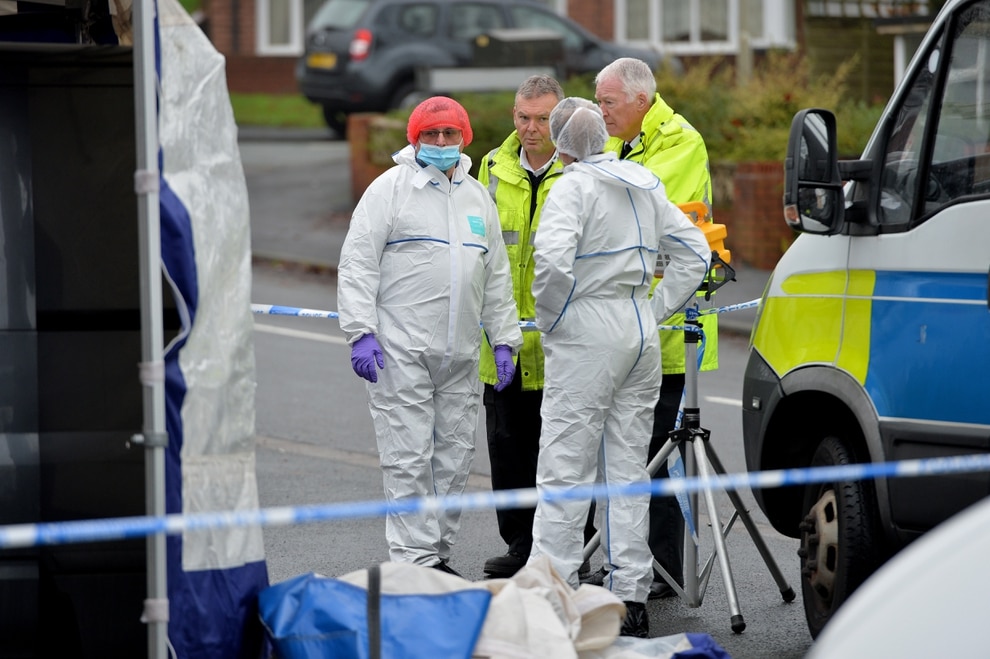 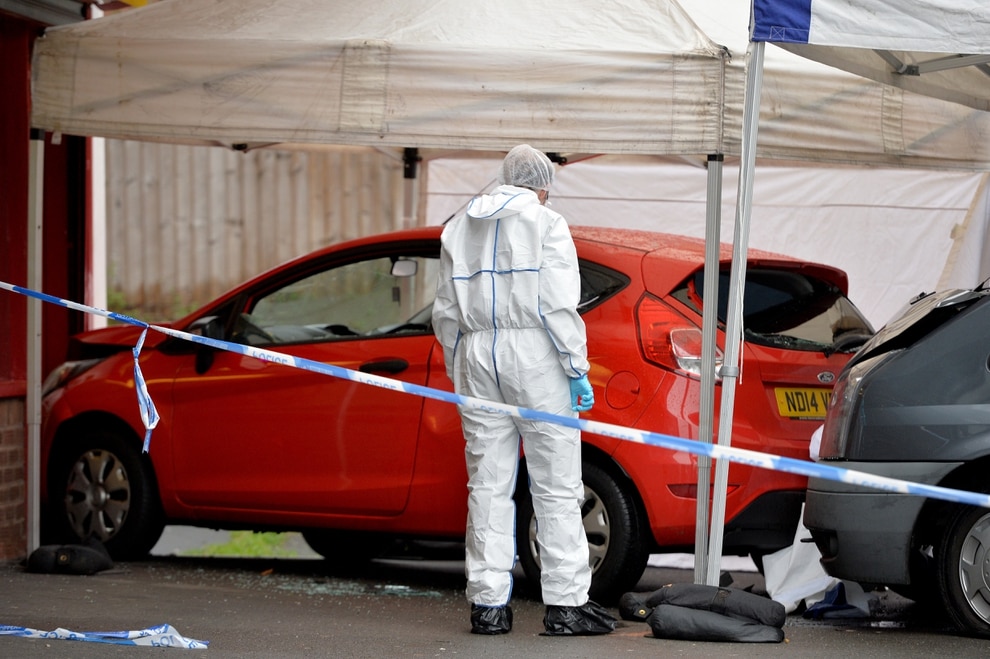 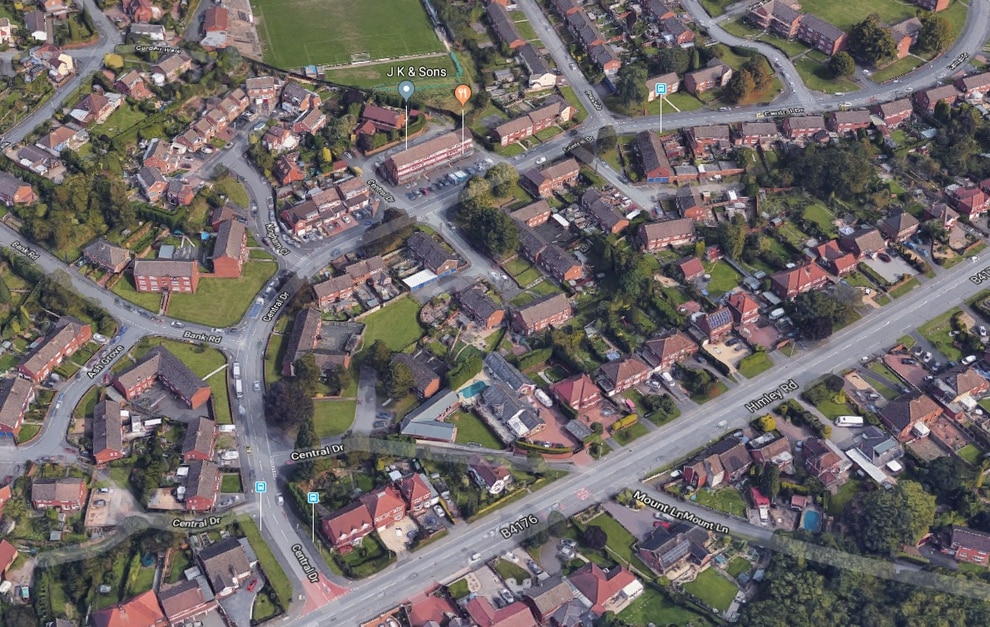 An aerial view of Central Drive in Lower Gornal, where the man died. Photo: Google 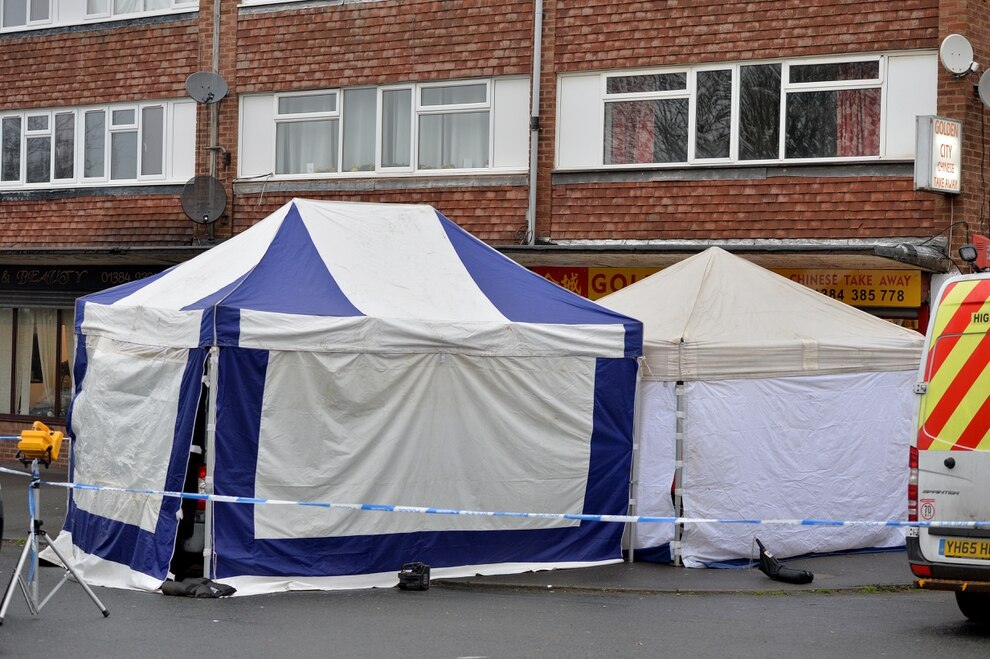 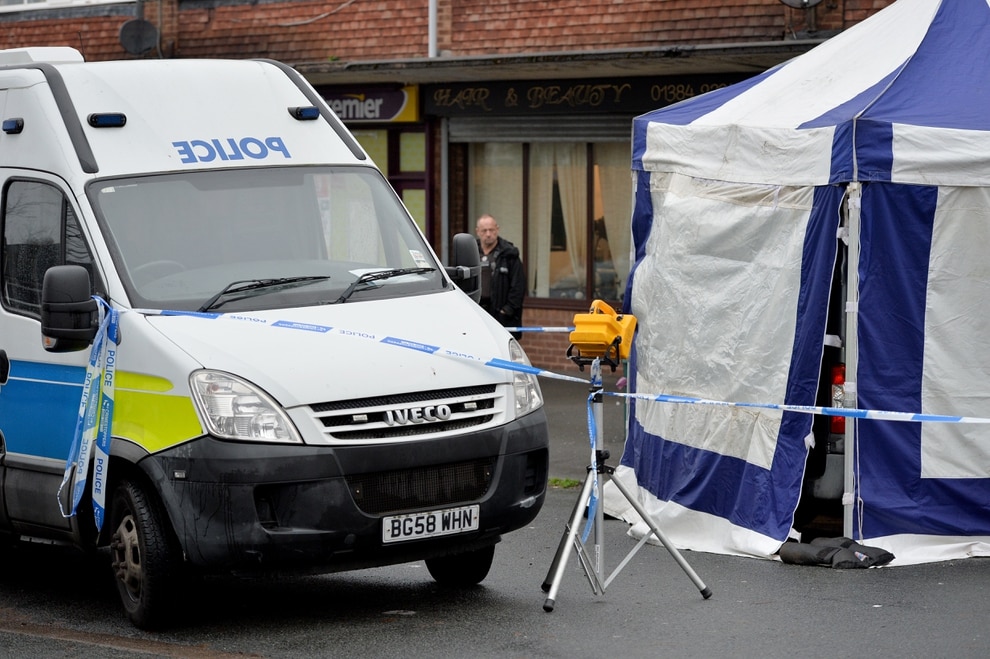 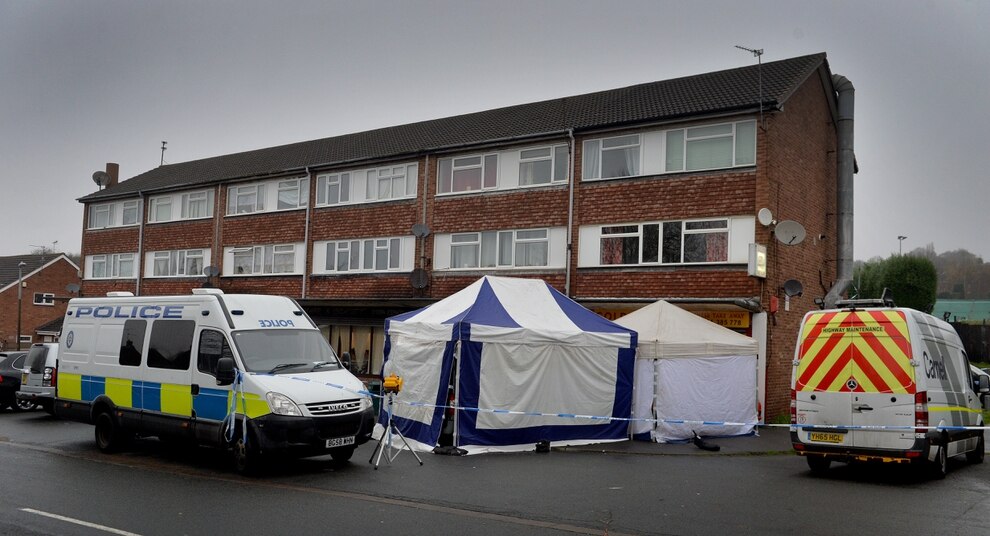 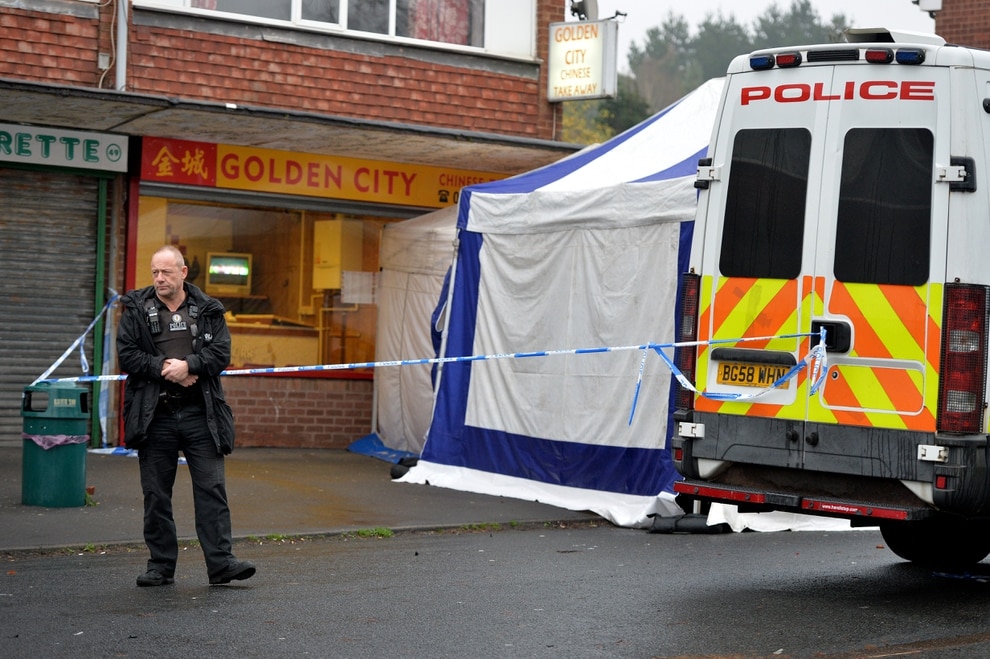 Three men have been arrested on suspicion of murder after the man, aged 34, was killed in the attack in the Lower Gornal area of Dudley last night.

He was found critically injured in Central Drive, near where the car and van had crashed next to the Golden City takeaway.

The stabbing victim and another man, who is believed to have escaped, are thought to have been attacked by an armed gang after the crash happened at around 9.40pm.

West Midlands Police said they received a 999 call reporting a vehicle being rammed and two men being chased by a group carrying weapons.

The 34-year-old was pronounced dead at the scene and shortly afterwards officers arrested three men on suspicion of murder at an address in the Lower Gornal area.

The suspects - aged 32, 36, and 41 - all remained in custody for questioning this morning.

Golden City and other nearby shops were cordoned off this morning as police forensic teams scoured the area.

Specialist officers have been examining inside and outside the takeaway, while search teams have been hunting for evidence in nearby roads.

Meanwhile the crumpled red Ford Fiesta with smashed windows remained in place sandwiched between the takeaway entrance and a grey Ford Transit van.

The police cordon stretches around the cars and the front and back of the shopping parade opposite Overbrook Close.

Jagdish Singh, 69, who has owned nearby JK & Sons convenience store for the last 36 years, said the murder had left the community shocked.

He said: "The road was cordoned off. There were lots of people outside. There was a car that rammed the Chinese shop.

"We are absolutely shocked. I have not seen a murder here before."

WATCH: Police forensics at the scene

Mr Singh’s wife, Kuldip Kaur, aged 70, added: “We never see this in this area, it’s a nice and safe place, or so I thought.

“I am a little worried about staying here, it’s scary, we’ve never had anything like this in 36 years.

“It’s a small comfort to know that the police have arrested some people, but I was told there was more than three of them, more like seven.

“It’s a shame for the Chinese takeaway too, the new owners have only been there for six months, now they have this to deal with.”

June Brace, aged 73, lives nearby with her garden backing onto the back of the shops.

She said: “It’s so worrying. I walk the dogs in the evening and I always feel safe, it’s really surprising and shocked me, it’s the first thing I’ve seen since I lived here.

“Everyone around here says hello to each other, even the children did when I first moved here, it’s a nice place.

“It’s very unusual what has happened, I haven’t heard anything like it before.

“I suppose this is the way the world is now.”

Meanwhile the owner of a nearby business, who wished to stay anonymous, said: "I've had the business for 30 years and lived in Gornal all my life, for 52 years, and its always been a quiet village.

"It seems to have downhill a little bit in the last couple years, I have no idea why.

"I've never ever seen anything like this in Gornal before, never at all, its always quiet and everyone knows everybody.

"To see this is unbelievable, you would never expect this in a million years, not a murder."

Detectives are now appealing for witnesses, or anyone with any information about the attack, to get in touch.

Reporter Liam Keen was at the scene:

I’m here on Central Drive in Lower Gornal where a 34-year-old man has been stabbed to death. @ExpressandStar pic.twitter.com/psAxKRUiH5

The police cordon at the scene is huge. Underneath the two tents are two vehicles. The cordon stretches behind the Golden City Chinese Takeaway - including up steps behind the store. pic.twitter.com/j4FpMkRAyt

Here you can see how far the cordon stretches back and the police tape covering the steps. pic.twitter.com/sJHkwKxTTg

Behind the shops is more police tape, a large operation here this morning. pic.twitter.com/0ihiaYjMhI

Forensics have now arrived on the scene. pic.twitter.com/0q79RRhjLp

One of the cars is now in view. Most of the windows are smashed in. pic.twitter.com/ZxNrD7FBnp

Behind the shops forensics can be seen working on the premises of the takeaway. pic.twitter.com/26YMTWjhZU

Specialist investigation officers are now searching along the road near the incident. @ExpressandStar pic.twitter.com/DreOqRPCBT

Forensics can also be seen inside the takeaway. pic.twitter.com/qtSy2iUShu