Throwback Thursday: A sad final chapter to a legendary tale at Wolves

It was a sad day as news of Stan Cullis’s departure sent shockwaves through Wolverhampton.

Here, 55 years since it happened, Joe Edwards looks back at the legendary manager’s exit in the first of his new series, Throwback Thursday.

He said he would never leave unless he was sacked...

On September 15, 1964, Stan Cullis was relieved of his duties as Wolves boss. The man behind Wolves’ golden era through the 1950s, leading them to three First Division titles and two FA Cups, was gone – in rather abrupt fashion.

The board, it is fair to say, came in for a wealth of criticism for the decision, especially considering Cullis had been struggling with illness in the build-up to his dismissal.

Express & Star writer Phil Morgan penned on the day: “This soccer bombshell exploded at Molineux today only a few hours after the team’s first win of the season against West Ham last night.

“It comes, too, after Cullis’s return only yesterday from a spell at the seaside, taken on doctor’s orders, after a period of illness that kept him away from five of the side’s first seven matches.”

Wolves’ announcement was brief, too.

Morgan stated that ‘beyond the news that his contract, which had another year to run, had been terminated, the club, through the new chairman, Mr John Ireland, had nothing to add’.

What they did say in the official statement was: “The Wolves board have informed their manager, Stanley Cullis, they wish to be released from their contract arrangements with him. This he has consented to.”

Cullis, regarded by many as the best gaffer in the country during the ‘50s, meanwhile, was too upset to speak at length, seemingly as shocked as the vast majority were.

“No, you can’t. I have nothing to say,” he replied as the E&S looked to grab a word with him as he left the Wolverhampton Rotary Club meeting.

Morgan, in his back page piece in a paper dominated by the news on Cullis, expressed his admiration of the man for his ‘singleness of purpose that took him to football’s front rank’. 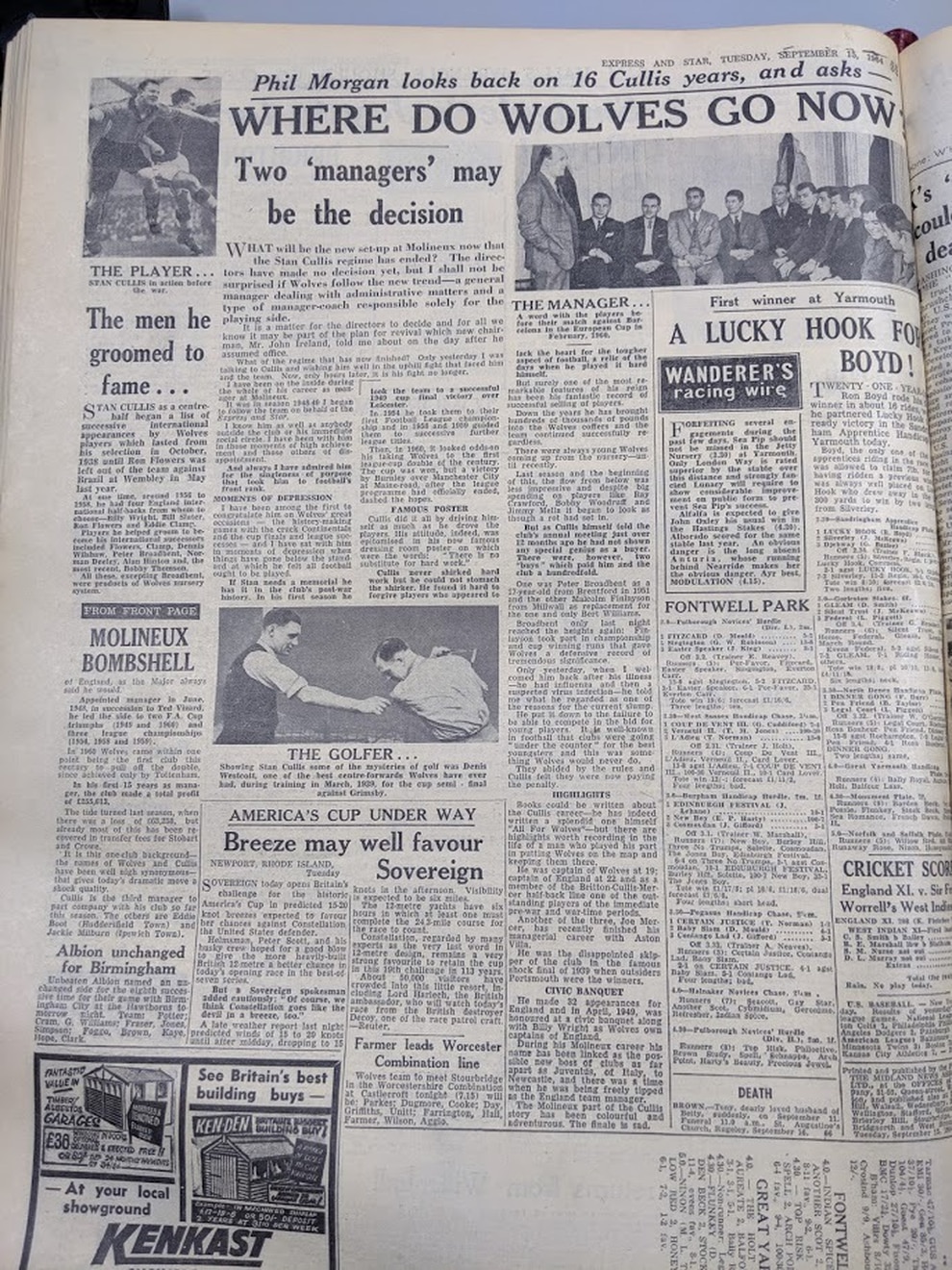 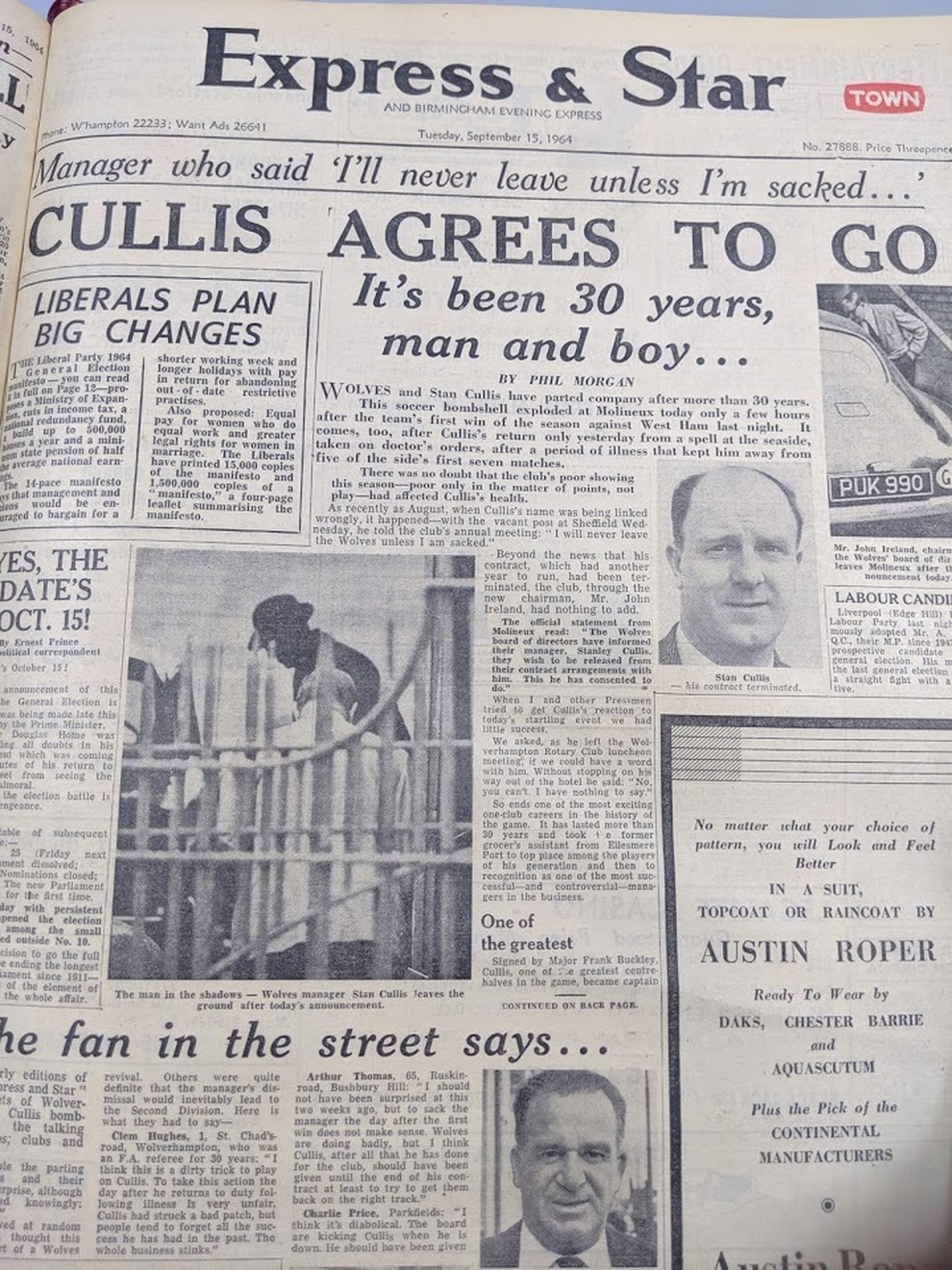 And let’s not forget Cullis as a player.

Captain of Wolves at 19, captain of England at 22, he was one of the outstanding players of the immediate pre-war and wartime periods.

A centre-half who was powerful in the tackle and strong in the air, with an eye for a defence-splitting pass and the confidence to take it forward with his ungainly, crouching, dribbling style.

As a manager, Cullis – who went on to manage Birmingham City for five years – instilled a fighting quality and built a side which thrived on the quick, long pass – otherwise known as the big boot.

The names Wolves and Cullis did, and still do, go hand in hand, despite his shabby treatment on his way out.

Morgan summed it up perfectly as he finished off his reporting of a dramatic day with: “The Molineux part of the Cullis story has been colourful and adventurous. The finale is sad.”

Defeat but Wolves youngsters go through in cup

Comment: Nuno’s big news – and he’s only getting bigger

Bright Enobakhare could be in for Wolves chance in Europe