While the news of managing director Laurie Dalrymple's departure from Wolves yesterday came a shock, there had been a growing feeling behind the scenes that a dramatic change was imminent.

Dalrymple reportedly hadn't been seen at the club for some time and had certainly gone off the radar in terms of being contactable, writes Wolves correspondent Tim Spiers.

There had been suggestions for a while that he and Jeff Shi and/or the Fosun hierarchy didn't necessarily see eye to eye on a range of issues.

That's not exactly a surprise given their respective career histories – Dalrymple is a pragmatist with a background that included working at the Ricoh Arena. Shi and Fosun are still relatively new to football, approaching the sizeable Molineux task with unorthodox, bold approaches and limitless ambitions.

While not exactly a power struggle (there'll only be one winner with Fosun) it's fair to say the pair approached subject matters from different angles.

It would be unwise to speculate (and there are plenty of rumours flying around) as to what exactly the final breaking point was that led to Dalrymple being placed on gardening leave, but you don't have to be Columbo to work out the most pressing off-field issues on the boardroom table – sponsorship, ticketing, new kits, growth in China and, the big one, the redevelopment of Molineux.

Shi has, on a couple of occasions, tentatively referenced exploring the possibility of leaving Wolves' ground of 130 years for a new purpose-built venue.

In contrast, Dalrymple had always been steadfast in his belief that Wolves must stay at their home.

"We want to be seen as an iconic venue for a multi-purpose use, not just in the Midlands but nationally as well," Dalrymple said recently.

"We want this stadium to become not just a fantastic football venue but also a choice for non-matchdays."

Whether that was a sticking point remains to be seen.

The former managing director was also understood to have taken part in high level discussions with City of Wolverhampton Council about building a hotel, shops and restaurants on Waterloo Road, where a club car park is currently housed. For such a high-profile – and welcome – potential addition to the city, it was curious that no statement was provided by Wolves when contacted about the story by the Express & Star.

There have also been a number of potentially contentious decisions made recently. Ticket prices have increased, staff in senior roles have changed, the team has swapped kit colour twice in a year and the club have changed sponsor twice in a year (with obscure betting firms linked to China the two companies adoring Wolves' shirt). All potentially divisive issues behind the scenes.

Whatever the true reasons for the split, it's fair to call Dalrymple's tenure at Wolves a success.

The MD has been just about as popular with supporters as a man in his position could be.

Sure, that was helped by the team's roaring success on the fiel, but Dalrymple, as well as improving the club's commercial offering, keeping tickets cheap for kids, helping secure Adidas as a kit supplier and instigating the innovative introduction of rail seats at Molineux this summer, played a crucial role in bridging the gap between the director's box and the terraces.

Trust and transparency were links eroded during the final years of the Steve Morgan/Jez Moxey era. Dalrymple, prolific on Twitter, learned from Moxey's PR mistakes and got his tone absolutely spot on with passionate supporters who call a spade a spade and see through empty rhetoric and corporate mumbo-jumbo.

Simple gestures like meeting fans in the pub before Brentford away, getting Mexican wrestler Sin Caraover for a Molineux visit or handing out free drink vouchers towards the end of last season, went a long way.

His job, essentially, was to make money out of supporters but he did so while offering incentives for loyalty and making a concerted effort to improve the Molineux experience, bringing about the pre-match music extravaganza brought in last season.

While his exit, yes, does come as a surprise, in a way it's also perhaps overdue, given that Fosun were widely expected to bring in their own people to fill the top-tier positions when buying the club in 2016.

It's testament to Dalrymple and sporting director Kevin Thelwell – who split many of Moxey's duties between them – that they've proved their worth and assisted in Wolves' rapid rise into a top half Premier League team.

This is just the latest in a number of changes behind the scenes in off-field senior roles including in the marketing, ticketing, media, legal and HR departments.

It's a bold move to dispense with such a key and popular figure, but one thing you can never accuse Fosun of not being is ruthless.

They are aiming for the very top of English football. Good people will be made causalities along the way. Dalrymple isn't the first – and he won't be the last.

Dalrymple told me on May 9: "You don't really reflect on success until you get to the 'quiet' time in the summer.

"They're the challenges you want, you're gearing up to compete with the elite.

"When we sit back and reflect on the achievements...to have had some the peaks and the highs of this season is fantastic."

He can certainly look back on a job well done. 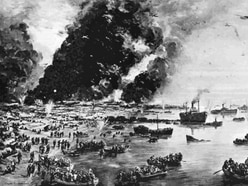