Matt Doherty salvaged a fourth round replay for Wolves as they came from 2-0 down to draw with Shrewsbury Town. It finished 2-2 at the Meadow (AMA SPORTS PHOTO AGENCY) 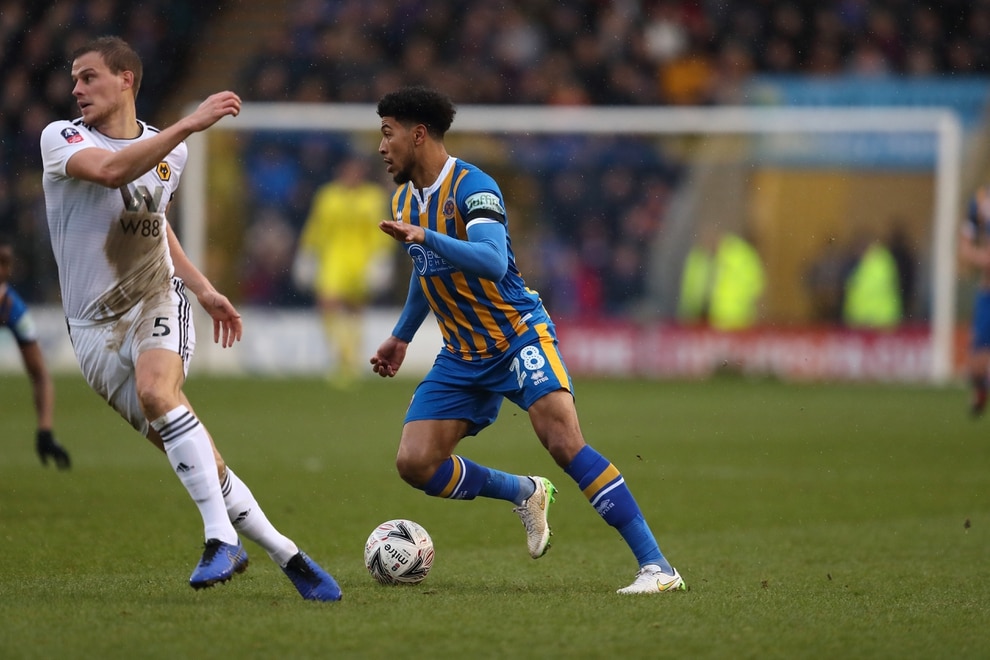 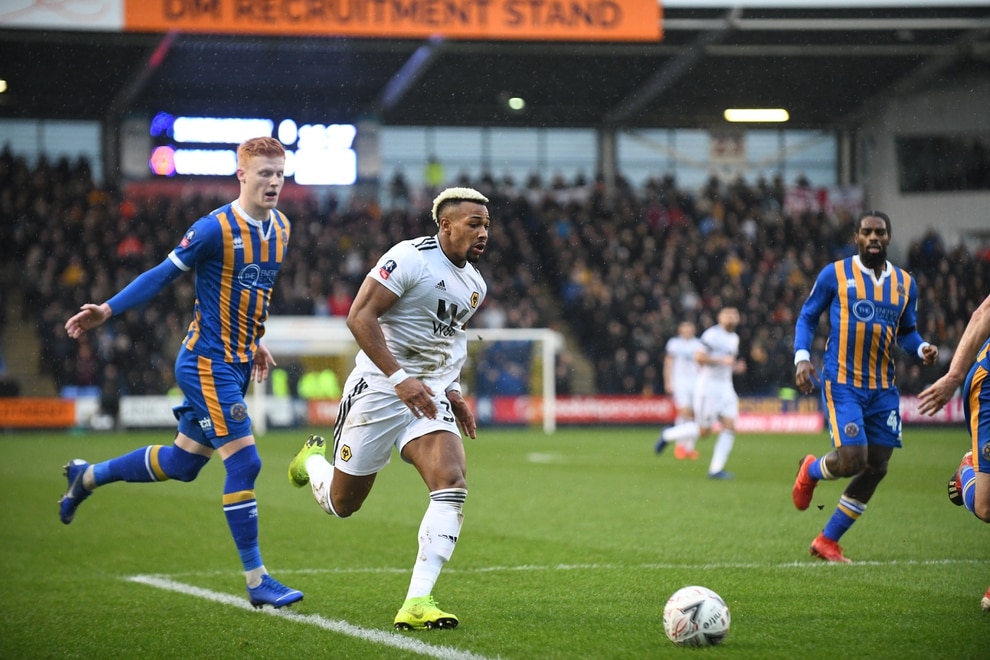 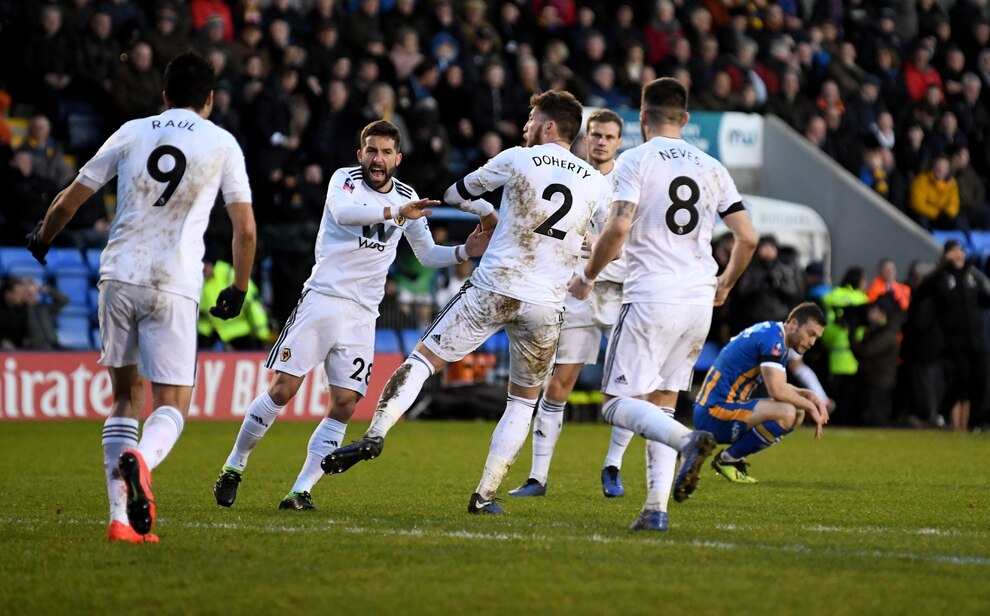 A poor first half yielded few chances, with Adama Traore wasting Wolves' best opportunity when he fired over from 12 yards.

Shrewsbury took the lead just after half time through Greg Docherty and then stunned Wolves with a second from Luke Waterfall's header.

Raul Jimenez almost immediately pulled one back from Ivan Cavaleiro's cross and then in the 93rd minute Doherty headed from from Traore's floated cross to claim a last-gasp draw.

This was a wasted opportunity – but it could have been so much worse.

Sure the pitch wasn't great, sure it was windy, sure there wasn't the room for Wolves to play their usual game – but none of these are excuses for Wolves being held by League One opposition and so very nearly losing.

Both Nuno and John Ruddy said Wolves' attitude, desire, application and motivation needed to match Shrewsbury's...and then their quality should shine through. Well, it didn't in the first half, when they were lacklustre, banal and short of ideas.

Sam Ricketts could well have told his players at the break 'they're nothing special, we can win' this'. And they so nearly did.

Wolves were indebted to a spirited fightback with substitutes Ivan Cavaleiro and Raul Jimenez making big impacts from the bench.

And yet again – for the fourth time this season, in fact – they scored in injury time, this time to salvage a draw, via Matt Doherty's header. It was a dramatic end to an absolutely cracking second half – and there was nothing wrong with Wolves' fighting spirit. Boy, did they want to avoid an exit in those closing stages.

It wasn't pretty, but Wolves are just about in the draw for the fifth round. In a competition they have a big opportunity to progress deep into, that's ultimately all that matters.

But they'll have to play a hell of a lot better than this on Tuesday week.

The teenager had seriously impressed in pre-season and made the bench for the Leicester win last weekend.

Shrewsbury's boss, ex-Wolves player and coach Sam Ricketts, named the same XI that had drawn 0-0 at Blackpool. Dave Edwards missed out on another reunion against the club he served for nine-and-a-half years with a groin injury.

It was cold, wet and windy in Shropshire and on a bobbly pitch Wolves were in unusual territory compared to their usual Premier League surroundings. And in the first half, it showed.

A fabulous atmosphere in the stands, with two loud Shrewsbury sections and a noisy away end, wasn't match on the pitch where there were few chances created and precious little quality on show.

After a haphazard start which mostly involved a bit of hoofball from both sides, Wolves did settle down, get used to the pitch and start playing their usual passing game (enjoying 60 per cent possession).

But with little room in the final third, they were often left frustrated. Conor Coady pinged countless balls to the flanks where Doherty and Giles had little joy, while a series of long balls to Traore and Costa unsurprisingly yielded minimal success.

Traore did his best and was involved in the brightest moment of the opening 20 minutes when he superbly spun his man, raced deep into the Shrewsbury half and played in Costa, but a poor touch in the box allowed a defender to close him down and, while the resulting challenge yielded a penalty shout, the referee gave a goal kick.

Traore was also involved for the best chance of the half for either team. Doherty skipped past a couple of challenges to the byline and pulled the ball back for the Spaniard who ballooned over the bar from 12 yards.

Doherty and Gibbs-White fired half chances into the stands – and that was pretty much it from Wolves.

Neves tried his best to pull the strings but the runs ahead of him weren't good enough – or Shrewsbury defended well to intercept his passes.

At the other end set pieces looked to be the best route to goal for Shrewsbury but Wolves coped well enough with the three corners the home team won and Ruddy did well to claim a couple of deep free kicks.

Midfielder Greg Docherty tested Ruddy from range with a decent effort, but the keeper blocked it and then Coady cleared the danger.

It had been a drab first half of few highlights. All that changed at the start of the second half – but not in the manner Wolves wanted.

Neves couldn't reach a Gibbs-White pass and suddenly Okenabirhie was racing towards the Wolves box – he played in Docherty who lashed goalwards from a tight angle, it took a deflection off Saiss and flew past Ruddy into the net.

Wolves mounted an instant response with a deflected Neves 30-yarder dropping inches past the post, before the same player fired over from just outside the box when teed up by Costa.

It should have been 1-1 a few minutes later but Costa sent his free six-yard header too close to keeper Steve Arnold from Doherty's floated cross.

Wolves had been sparked into life in what was now a cracking cup tie. Luke Waterfall sent a header just wide for Shrewsbury and then at the other end newly-introduced substitute Raul Jimenez had a golden opportunity with his first touch – but shanked wide from 12 yards after good work from Giles.

If the home fans were noisy before, they were almost deafening now in what was an increasingly frantic encounter.

Jimenez was denied by a brilliant Mat Sadler tackle after taking Doherty's pass, and then the Irishman kept a corner alive to feed the Mexican striker who sent an overhead kick over the bar.

Shrewsbury were still looking dangerous from set pieces, though, and it was via one that they doubled their lead.

Bennett had cleared a vicious free kick for a corner – from that, the ball was sent into the six yard box where Luke Waterfall powered home a header from close range to take the roof off the Meadow.

Nuno immediately sent on Ivan Cavaleiro for Giles – and within three minutes Wolves had pulled one back.

Cavaleiro twisted and turned near the corner flag on the right and whipped a wicked ball across the face where the menacing Jimenez turned it in for his eighth goal of the season.

Moutinho for Gibbs-White was Nuno's final change, with Wolves having 11 minutes to salvage the tie.

They threw everything at Shrewsbury in the final minutes via a succession of crosses and corners, without creating a golden chance.

But it finally arrived in the 93rd minute – and Doherty powered home a header from Traore's cross to salvage a dramatic late draw that Wolves just about deserved.

25 – Doherty pulls back for Traore who fires over right-footed from a good position.

47 – GOAL – Okenabirhie plays to Docherty who lashes past Ruddy into the net via a slight Saiss deflection from a tight angle on the right.

55 – Should be 1-1 but Costa heads straight at the keeper from close range.

75 ­— GOAL – Jimenez turns in Cavaleiro's cross to pull one back

Wolves host West Ham at Molineux in the Premier League on Tuesday, kick off 7.45pm