Wolves produced a famous win at Wembley as they beat Tottenham Hotspur 3-1. 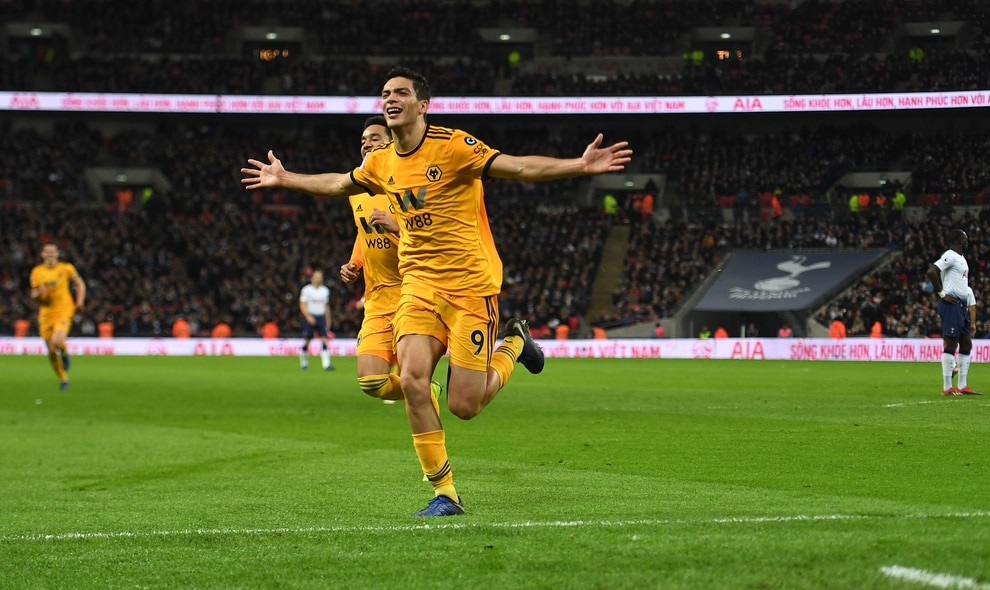 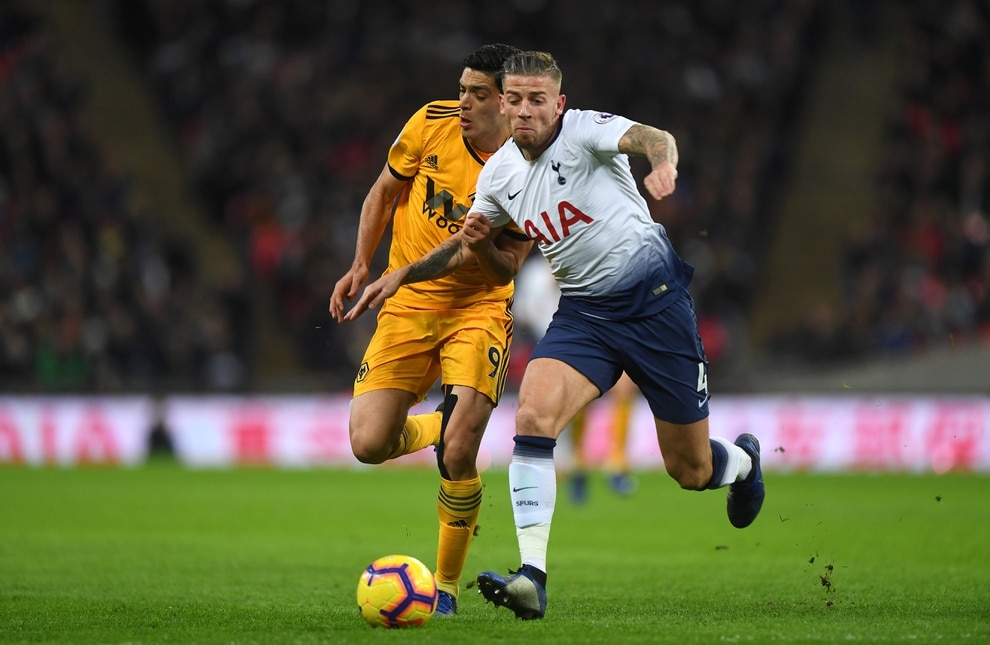 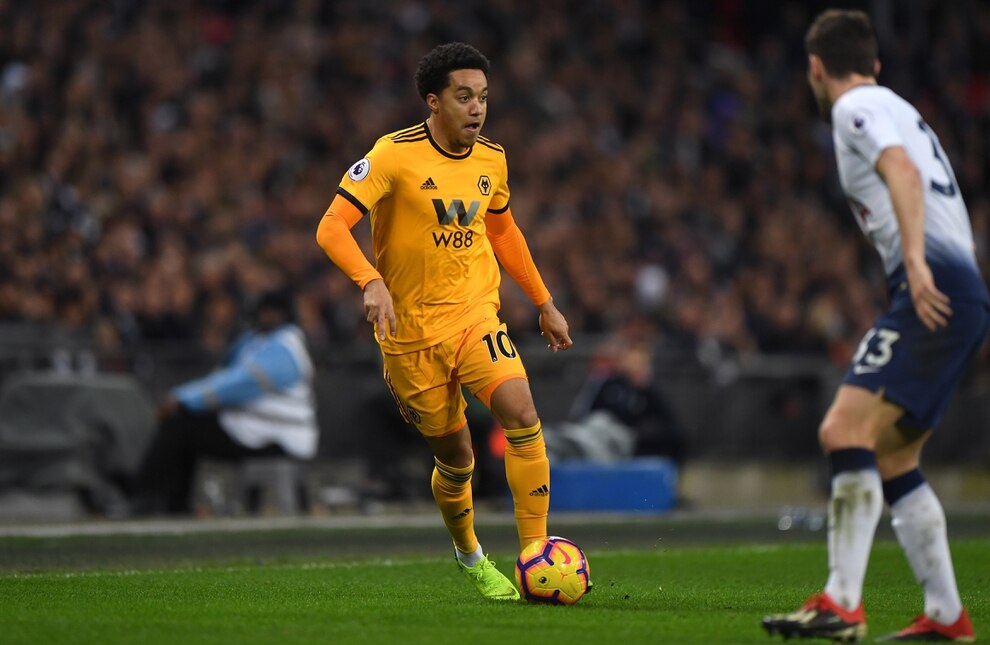 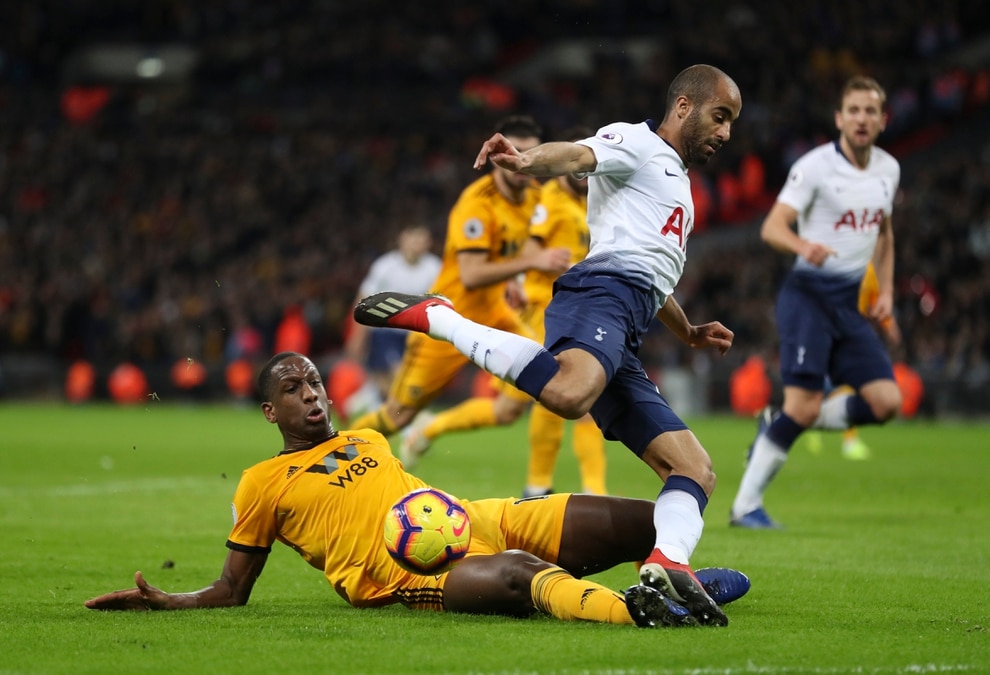 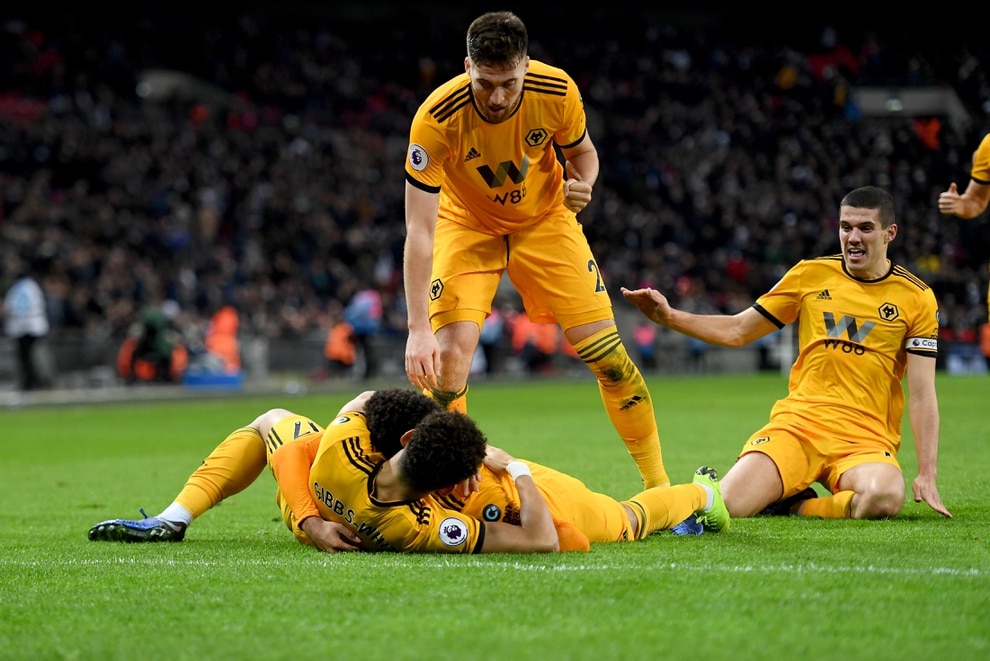 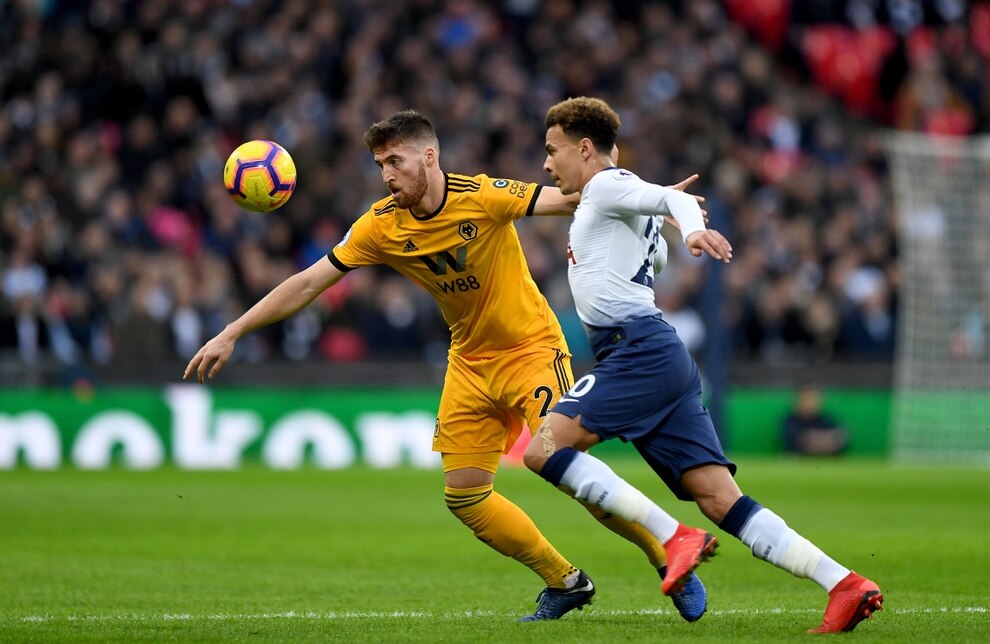 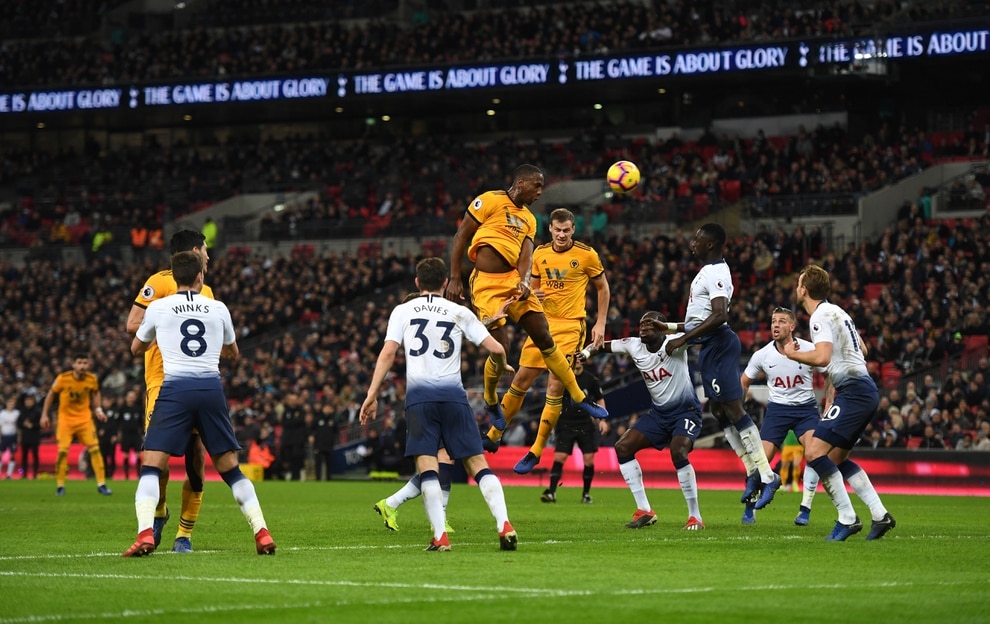 Willy Boly of Wolverhampton Wanderers scores a goal to make it 1-1. (AMA/Sam Bagnall) 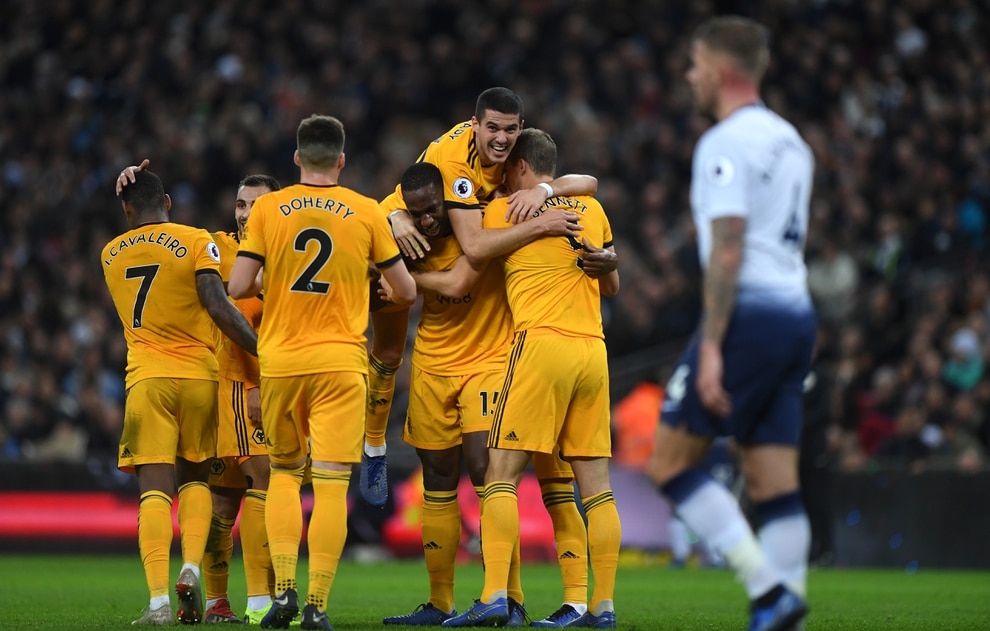 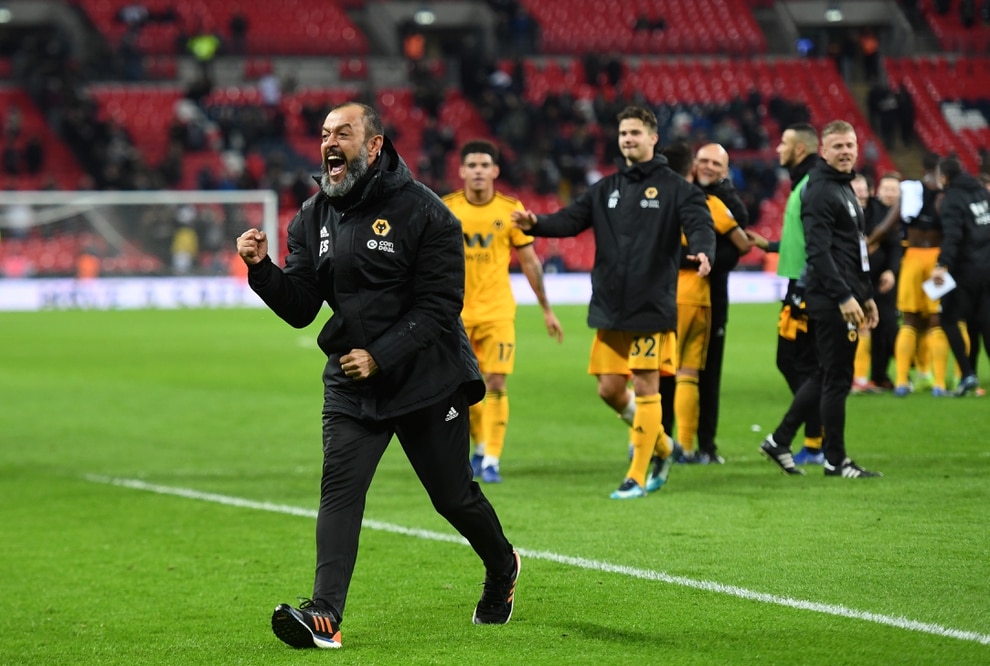 But Wolves dominated the second half and equalised when Willy Boly headed home Joao Moutinho's corner.

Then Raul Jimenez sidefooted home and Helder Costa netted on the break in front of 3,000 ecstatic supporters.

Sometimes in life you don't get what you deserve. This wasn't one of those days.

Most people expected Wolves to get an absolute pummelling here, writes Tim Spiers at Wembley.

Spurs came into the game on the back of thrashing Everton 6-2 and annihilating Bournemouth 5-0 in the space of just a few days.

Wolves, on the other hand, had only earned a point from two matches against Liverpool and Fulham.

The bookies had them 9/1 to win, they were huge outsiders on their first trip to Wembley since 1988.

But Wolves have proved time and again this season that 1) They love the big occasion and 2) They should never, ever be written off.

This was a phenomenal victory – and Wolves played it absolutely perfectly. They soaked up the Spurs pressure in the first half, restricting them to long shots.

Then in the second, they played. And my did they play.

This was the exact opposite of smash and grab. They dominated possession, they pushed Spurs deeper and deeper, they controlled play – and after 15 minutes of pressure they got exactly what they deserved with an equaliser.

But they didn't stop there. They piled forward, they showed adventure, they showed courage and Spurs couldn't handle them.

It was indicative of Nuno's Wolves. They don't sit back, they don't try and spoil game. They play to win – and in an increasingly special season, this day will be hard to beat.

Nuno, not for the first time in recent weeks, sprang a surprise with his team selection.

Leander Dendoncker was handed his full Premier League debut after previously only featuring in the Carabao Cup and for nine minutes in the league as a substitute.

Ruben Neves was restored to the XI with both Joao Moutinho and Romain Saiss dropping to the bench despite their impressive showings at Fulham on Boxing Day.

Adama Traore kept his place but began in his preferred right forward position for the first time, while Ivan Cavaleiro came into the side at the expense of Morgan Gibbs-White.

Spurs selected about as strong a side as possible with the injury-free Dele Alli joining Harry Kane, Christian Eriksen and Son Heung-Min in an attacking and perhaps daunting line-up, given the fact Mauricio Pochettino's side had scored 11 goals in their past two matches.

It was no surprise that the hosts had the better of the first half. They enjoyed 67 per cent possession and produced 10 shots to Wolves' three.

However, most of the attempts from the home side were from long range, with Wolves defending well as a unit and restricting the influence of Eriksen.

It was just a shame that one of those long-range shots found the corner, via the thunderous left boot of Kane, who picked the ball up from Son, cut in from the right and send a piledriver past Rui Patricio, who got a hand to the ball but couldn't stop it going in.

In the build-up to the goal Willy Boly had fed Cavaleiro with a strong pass and the Portuguese player's touch was heavy, but he was also blocked off by Harry Winks. However, referee Stuart Attwell gave no foul.

That wasn't the only controversial Attwell decision – he had earlier turned Wolves down for a penalty when Davies appeared to block Traore's cross with his hand, albeit from point blank range.

Most of Wolves' attacks came via the lively Traore, who was enjoying running at Davies from deep and caused his fair share of problems.

One scintillating run saw him run a ring around Eriksen, while he also fed Jimenez with a couple of nice passes and floated a cross towards Cavaleiro who looked set to nod home but the ball was just taken off his head.

Wolves also looked to trouble Spurs from set pieces, with Ryan Bennett sending a header over from a decent position.

Make no mistake, though, the hosts were on top for most of the half. Alli curled one over, Son drilled an excellent effort just past the post, Coady had to make a perfect sliding tackle in the box to deny the same player and then Patricio had to be at his very best to tip a curling Eriksen shot over the bar with a magnificent save.

It was a satisfactory first period for Nuno's boys, who were very much still in the game against a team bang in form.

Dendoncker was pretty solid in midfield with a no-frills, minimal fuss display after taking a nasty early knock when clashing knees with Moussa Sissoko.

And Traore, after his anonymous display at Fulham, was certainly Wolves' best outlet, enjoying the big Wembley pitch by running from deep and frightening the Spurs midfield and defence with his electrifying pace.

The same player got Wolves moving early in the second half, but again Cavaleiro couldn't quite get on the end of his teasing cross.

The same combination again nearly yielded something for Wolves a minute later – Traore exploded forward from midfield and almost found Cavaleiro with a through ball, however Hugo Lloris had raced out his box to clear.

However Wolves, who were on top and enjoying their best spell of the game, then suffered a blow when Traore departed appearing to clutch his hamstring. He slowly trudged off to be placed by Helder Costa.

The visitors were seeing plenty of possession, with the home fans voicing their frustration as Wolves controlled the game, albeit without hurting Spurs where it mattered. A couple of crosses and through balls were close to creating that elusive golden chance, but Spurs were able to just about deal with the pressure.

Wolves were continuously winning the ball back from the hosts, who could barely get out their own half. It was constant pressure – and then came Wolves' reward.

Moutinho floated a perfect outswinging corner onto the head of Willy Boly, who planted a booming header past Lloris to send 3,000 fans absolutely wild in the far corner at Wembley.

But that was just the start of it. Wolves continued to attack and nine minutes later Cavaleiro danced forward before feeding Jimenez who cutely side-footed through Alderweireld's legs and into the bottom corner past Lloris.

There was absolute bedlam in the away end – but hungry Wolves weren't done yet.

Doherty pushed forward and fed substitute Costa who raced clear of the defence and coolly finished past a despairing Lloris dive. It was a scarcely believable scoreline – but Wolves fully merited their lead. Spurs hadn't had a shot all half, it was Nuno's team dominating.

They kept possession in the closing stages, with Spurs' only threat coming from a cross. It was the Wolves fans singing "we want for" and giving it the "ole" as Wolves sprayed it around the sizeable Wembley turf.

The full time whistle signalled the start of the celebrations. What a day for Wolves.

19 - Save! Spurs are really in the mood. Eriksen wraps his left foot around the ball from the edge of the box, forcing a top-drawer fingertip save from Patricio. Impressive reflexes from the Portuguese goalkeeper.

22 - GOAL! The hosts make the most of their dominance by taking the lead in stunning style. Kane picks up the ball on the right-hand side and cuts inside, before unleashing a scorcher into the top corner. A world-class strike, although Wolves feel Cavaleiro was fouled prior to the shot.

72 - GOAAALLLL!! Boly heads Wolves level! Moutinho, just after replacing Dendoncker, whips a delicious corner into the danger zone. Boly rises above the crowd to power past Lloris, into the far corner, sparking wild celebrations from the travelling fans.

84 - GOAAAALLLLLL!! Wolves go in front through Jimenez! Cavaleiro controls the ball and plays it to the Mexican striker, who does superbly to guide it through Alderweireld's legs and into the bottom corner. Fantastic finish from the No.9.

87 - GOAAAALLLLL!! Incredible scenes at Wembley as Costa puts the icing on the cake for Nuno's charges. Doherty goes on a marauding run and releases Costa, who coolly beats Lloris for his first Premier League goal. What an end to 2018 for Wolves!

Wolves' Raul Jimenez: Real Madrid and Barcelona would be too good to ignore