Sensational Wolves blitzed Burton 4-0 as they returned to second in the Championship table. 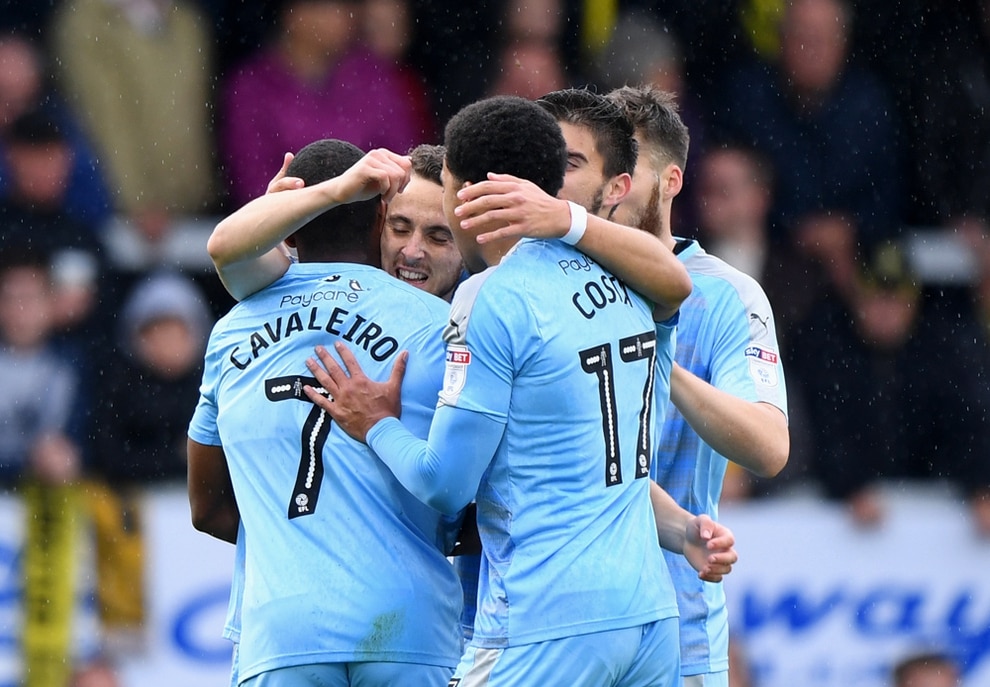 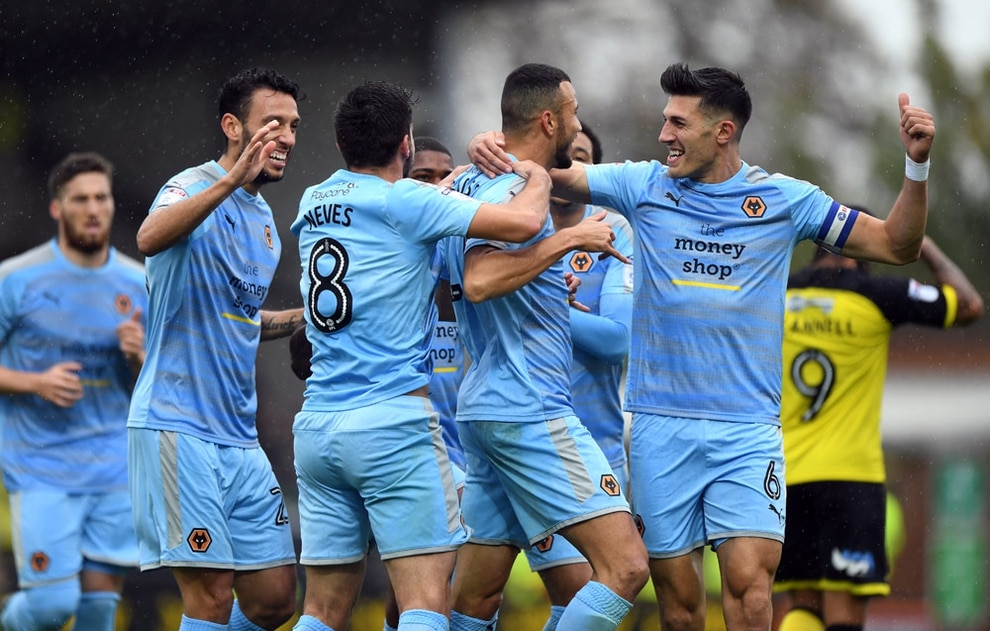 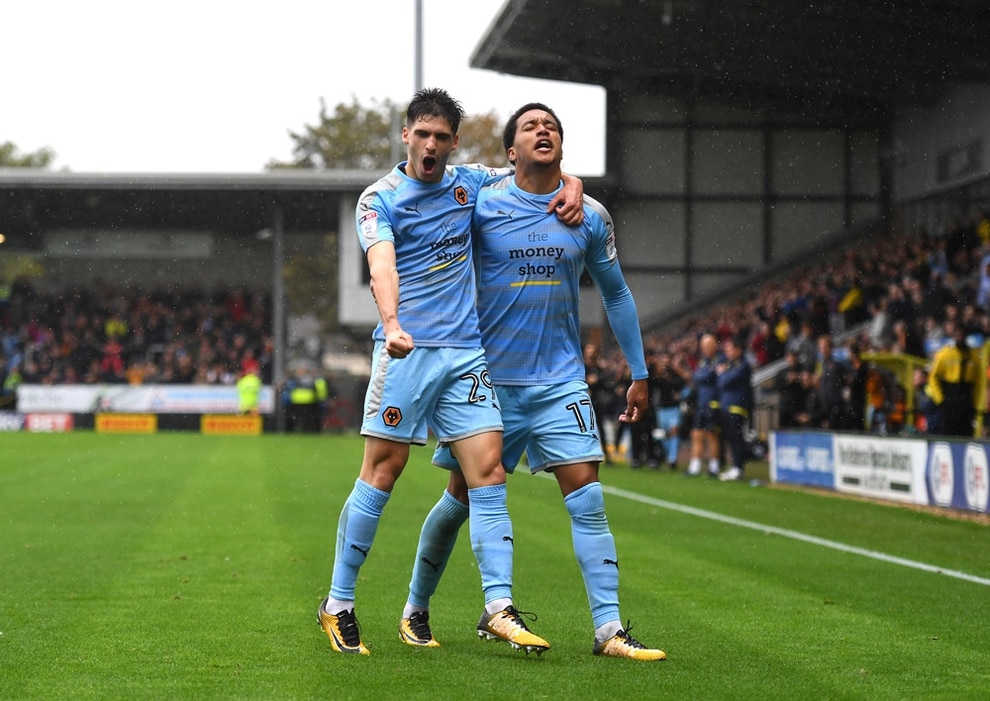 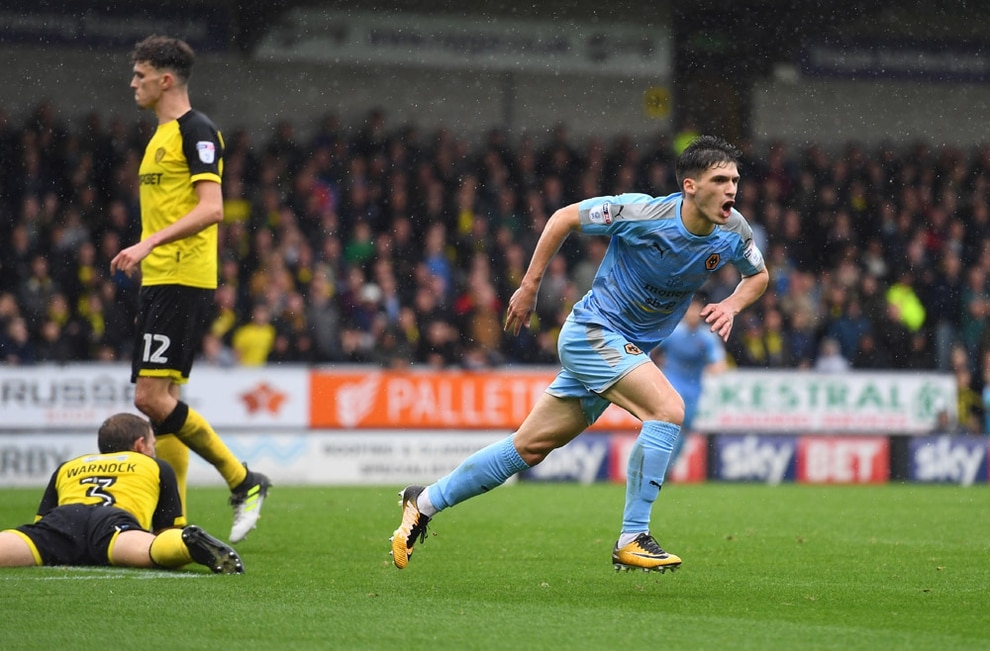 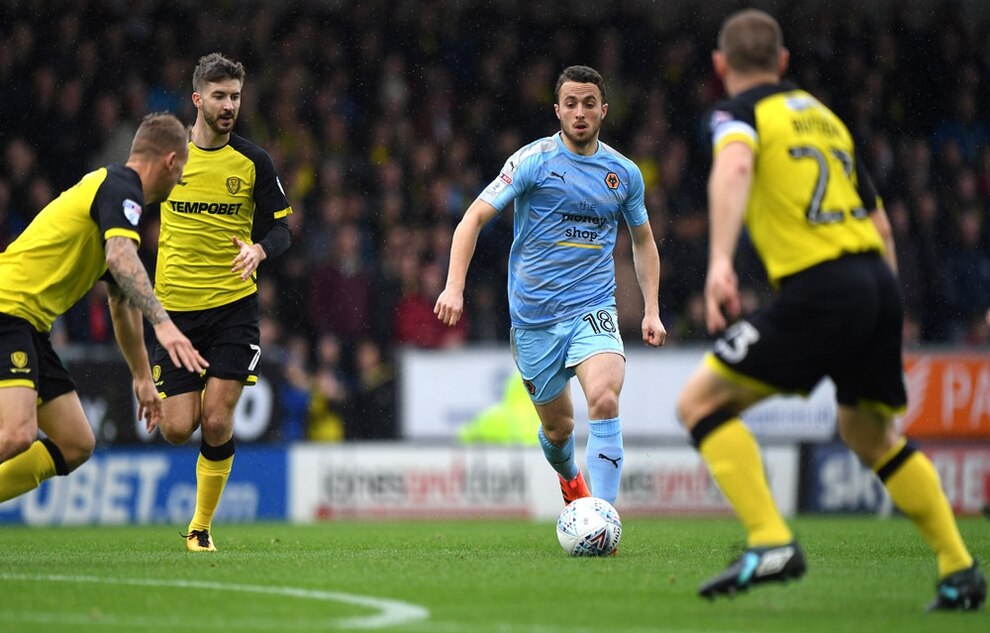 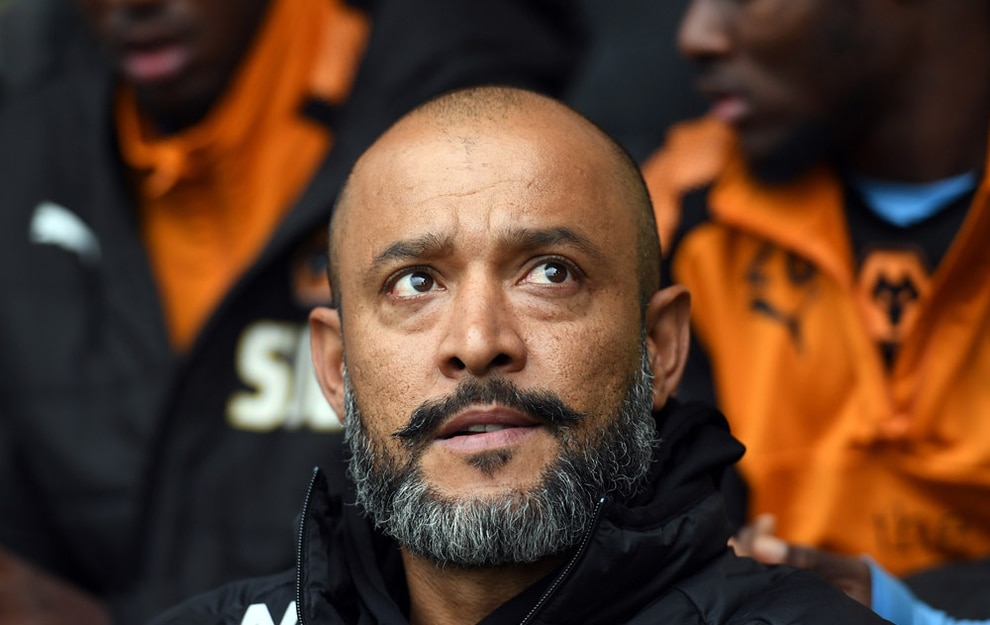 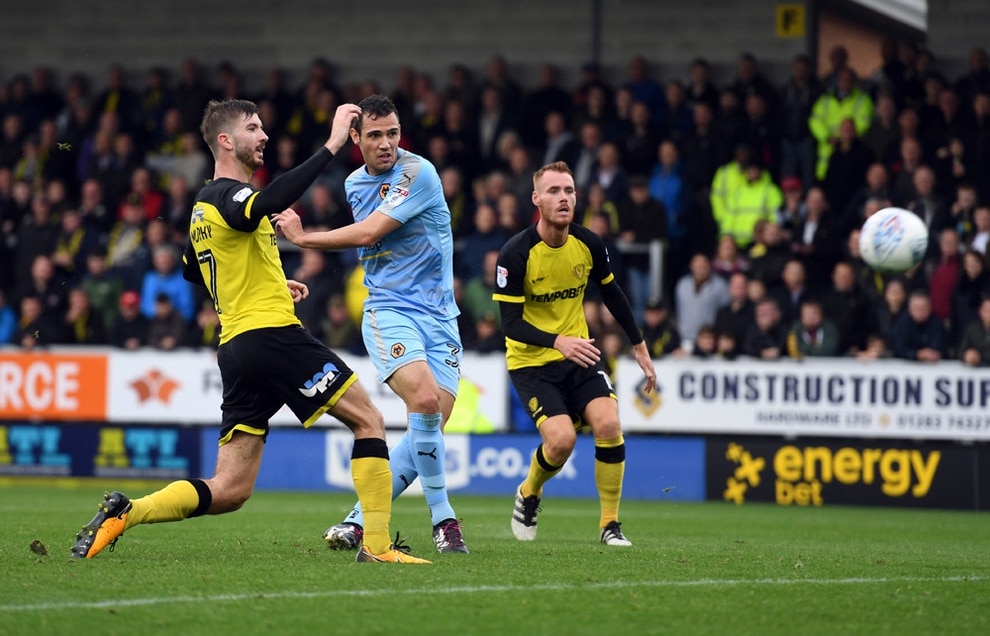 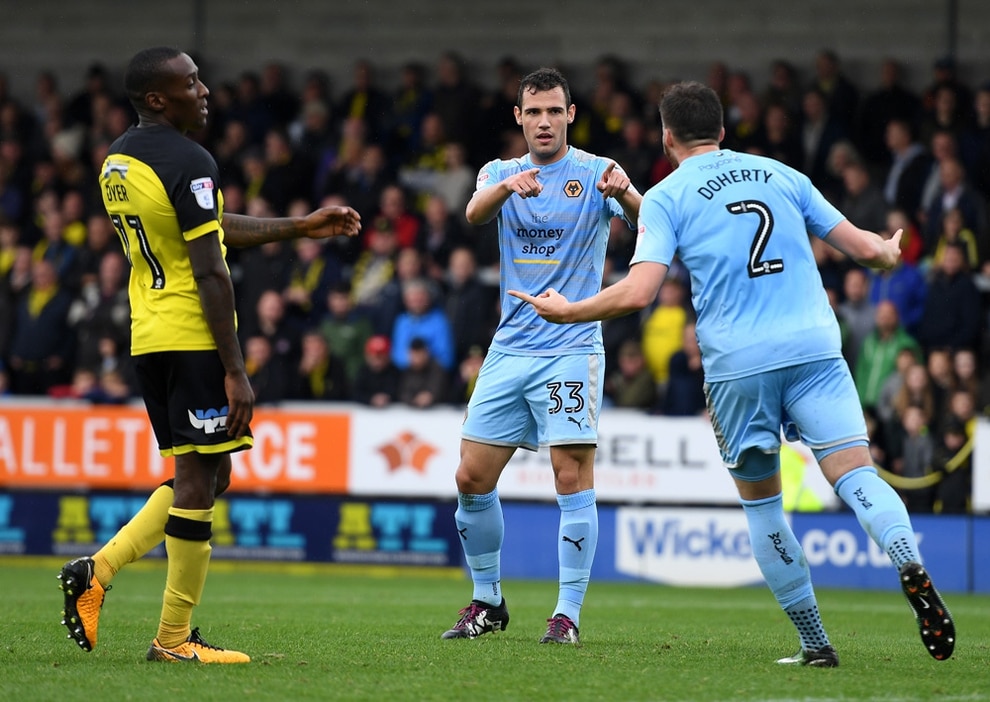 Diogo Jota opened the scoring in the fifth minute after racing clear of the Burton defence and by 11 minutes it was 2-0 when Romain Saiss netted his first ever Wolves goal from close range when Ruben Neves' free kick was spilled by Stephen Bywater.

Wolves were 3-0 up at the break when Ruben Vinagre exchanged a one-two with Cavaleiro and beat Bywater.

And substitute Leo Bonatini completed the rout after half time when he lashed Cavaleiro's cross into the roof of the net.

Portugal is generally famous for Nando's and Cristiano Ronaldo. Much more of this and it'll be famous for contributing to one of the most attractive football teams seen in Wolverhampton – and possibly even the West Midlands – in many a year, writes Tim Spiers at the Pirelli Stadium.

That's how good they were here. Some of the football produced by Wolves was nothing short of sensational. They'd been threatening to annihilate someone and it was Burton who were on the receiving end in a game that could – and should – have ended up 6-0 or 7-0 to Nuno's sublime side.

All the calls before the game were about Wolves 'bouncing back' from defeat. Well as Alan Partridge would say they played liquid football here.

Burton were lambs to the slaughter as a team containing six Portuguese players and of course managed by a Portuguese head coach obliterated the opposition.

Ivan Cavaleiro (who provided three assists), Diogo Jota and Helder Costa linked and interchanged with the grace of ballet dancers. Ruben Neves controlled the orchestra like a master conductor and the defence kept things as solid as granite. It was a pleasure to witness.

Two of the four goals were dreamy, particularly from Ruben Vinagre who rubbed salt into the Burton wounds when he made it 3-0 just before the break.

The way Wolves briskly moved the ball from one end of the pitch to the other was deeply impressive. The movement, the trickery, the awareness, the precise passes at pace...Burton just had no answer.

The game was over by half time. You got the impression Burton would rather have eaten a plateful of supermarket chicken than come out for the second half but they had to endure further punishment as substitute Leo Bonatini ended a lightning-quick counter with a fourth goal.

Costa looked good on his proper return to the side, Cavaleiro was unplayable at times and Neves was back to his best.

After no positives at Bramall Lane there were no negatives at the Pirelli Stadium. From one extreme to the other – and how the travelling fans enjoyed it.

At a damp and overcast Pirelli Stadium Nuno made four changes from the team that lost 2-0 at Sheffield United in midweek.

In came Ivan Cavaleiro up front, Ryan Bennett at centre half, Ruben Vinagre at left wing back and Romain Saiss in central midfield, with Leo Bonatini and Alfred N'Diaye dropping to the bench. Conor Coady missed out through suspension and Barry Douglas, who looked to be hobbling in the closing minutes at Bramall Lane, wasn't in the squad.

Burton were tanked 4-0 by Villa in midweek and brought in former Blues and Albion veteran Lloyd Dyer. Wolves forward Joe Mason is on loan at the Brewers but was ineligible to play.

Wolves had been under par in terms of performances for a couple of weeks – but they more than made up for it here with a first 45 minutes that was sensational at times.

The free-flowing football that defined their opening weeks of the campaign was back and better than ever.

The front three of Cavaleiro, Jota and Costa interchanged beautifully, Matt Doherty and Vinagre bombed down the flanks and Ruben Neves pulled the strings from midfield in what was a welcome return to form for the 20-year-old.

They blitzed the Brewers from the get-go and were 2-0 up inside just 11 minutes. First Cavaleiro released Jota – who was the central forward of the Portuguese front-line – and he beat Bywater with a cool finish.

Their second came from a Burton mistake, with Bywater dropping a free kick onto Romain Saiss' toe for his first ever Wolves goal.

And their third – just before the break – was a gorgeous move involving Cavaleiro and Vinagre, with the latter also netting for the first time in Wolves colours with a very smart 15-yard shot into the corner.

Burton had enjoyed a productive 15 minutes or so when they began to win the physical battle, pushing Wolves deeper and testing John Ruddy on a couple of occasions (one save in particular was excellent).

But otherwise this was a Portuguese pummelling. Time and again Wolves broke at lightning-quick speed via just a couple of passes.

Wolves were purring. Jota could have netted a couple more in what was a half reminiscent of some memorable away days in the early 2000s when Wolves steamrollered Stockport, Bradford and Walsall in the opening 45 minutes under Dave Jones.

Understandably the tempo lessened after the break. Costa was replaced by Bonatini after a good 51-minute showing.

Jota should have made it 4-0 but headed Bonatini's cross over...but Wolves didn't have to wake long as they made it a rout in blistering fashion on the break. Doherty and Cavaleiro combined and Bonatini crashed into the roof of the net.

The rest of the half was played out at a fairly sedentary pace as Wolves cruised to victory. Neves and Jota were rested (after Jota somehow headed over from close range) and thereafter chances were at a minimum until Danny Batth headed a Cavaleiro corner against the post with a minute to go, denying the Portuguese winger a fourth assist.

11 – GOAL – Eleven minutes on the clock and it's 2-0. Ruben Neves' 20-yard free kick is spilled by Bywater and Romain Saiss stabs it home from close range

39 – Almost 3-0. Helder Costa releases Jota down the left, he cuts inside and sees his shot blocked off the line before firing the rebound into the side netting

41 – GOAL – Ruben Vinagre exchanges a brilliant one-two with Ivan Cavaleiro, steadies himself and drills into the bottom corner from just inside the box

62 – GOAL – Matt Doherty intercepts, races down the right and releases Cavaleiro – he puts Stephen Warnock on his backside and crosses for Leo Bonatini to drive home from 10 yards. Wonderful goal.

'If this was the Fury fight last night, they'd have stopped it!' Wolves fans on Norwich battering - WATCH