Imagine leading out your boyhood team at Old Trafford, Anfield or the Emirates.

For the vast majority of us average footballers, that will always be nothing more than a pipedream.

But not for Albion superfan Dave Challoner - who for almost 20-years has been entertaining supporters up and down the country as the much-loved Baggie Bird.

Mr Challoner has seen it all in his time as one of football's most popular mascots.

From being kicked in the head by opposition players to winding up England internationals, the 35-year-old enjoys a wonderfully unique role at The Hawthorns.

And it is has led to him having some extraordinary adventures – that include meeting the Queen and performing on Ant and Dec's Saturday Night Takeaway.

Dave started doing odd jobs for Albion when he was just 13 as former groundsman - Stan Beard - was a family friend.

But it was in 2001 that he first donned the Baggie Bird outfit - and he has not looked back since.

"I absolutely love it and feel very fortunate that I have been doing the job for almost 20 years," Dave said.

"I am a fan, my mum and dad are massive fans - growing up the Albion is all I have known.

"So to have a job where you are walking out at Old Trafford, Anfield or Highbury is just incredible.

"I've been to practically every ground in the country.

"And the best bit is - when you are wearing that suit - you can get away with murder, they aren't going to kick you out the ground are they?

"It allows you to push boundaries.

"I remember a few years ago we were playing at Wolves. I'd actually had a police briefing before the game to go straight to the Albion fans and not entice the home crowd.

"But a kid through a fanzine at me. I picked it up, pretended to read it and then whipped my backside with it.

"The Wolves fans went mad. It was hilarious - although now I'm not allowed to go to Molineux!"

Gary Megson was in charge of Albion when Dave first landed the job as Baggie Bird.

The duo immediately struck up a rapport - with the manager making it clear Mr Challoner – who also works as a sales rep – had an important role to play.

"Megson changed the club for me," Dave continued.

we'd even carried the kit in black bin bags.

"But the following week we had brand new bags and were kitted out with full tracksuits.

"Meggo said if we were going to be representing the club we had to do it properly.

"There were a lot of things like that in and around the club that he went out of his way to fix.

"And he appreciated that I had a role to play, he wanted me out there and getting the fans going.

"When we got promoted in 2002 he threw us in the changing room and said 'you are part of this, you deserve it.'

"There I was as a fan celebrating with the players. I had just passed my driving test but they gave us so much champagne I couldn't drive home."

Eades dressed up as Baggie Bird, Baggie Junior and Albi for more than 20-years before he tragically passed away in December 2017. He was 42.

"Eadsey helped me get the job as Baggies Bird and was the person who taught me just how important it is," Dave continued.

"He was my best mate and much loved in the Albion family.

"We always used to have two mascots and he was Baggie Junior while I was Baggie Bird.

"But when he passed away the club immediately retired Baggie Junior.

"They were unbelievable and really looked after us.

"What Eadsey taught me was just how much some children look forward to seeing the mascot.

"There are some kids that come to the game who aren't bothered about watching football - they just want to see Baggie Bird.

"And they stand in the same spot every week.

"There are two kids in the Halford's Lane who at the start of the season were absolutely petrified of me - but now they love me!"

It's fair to say you have to be a character and have a big sense of humour if you are going to entertain football crowds for 20-years.

And nobody is safe from a Baggie Bird prank.

"In 2002 I did the old pretend to shake your hand but pull it away trick to David Seaman," Mr Challoner continued.

"He went to pull my shorts down. So I threw the ball up in the air and flapped about like he did when he got lobbed by Ronaldinho at the World Cup.

"Fortunately, did see the funny side."

Without doubt, the best perk of Dave's job, however, is the unique access it gives him to the players and staff he would otherwise be watching in the stands.

At times it has it's draw-backs – with the mascot taking a kick to the head during the infamous Battle of Brammell Lane.

But there are far more benefits – including last year when he ditched his mascot duties to listen to Jimmy Shan's on-the-pitch team talk during the play-off clash with Villa.

"It is mad what you can see in the tunnel," said Dave who has recently undergone keyhole surgery on his knee but is hoping to be able to resume mascot duties when football returns.

"The players have always been great with me especially the likes of Brunty (Chris Brunt), Mozza (James Morrison) and also Mason Holgate who text me after I had my operation.

"But I've got to say this year's group are fantastic.

"They are so tight-knit. They are led by Jake Livermore but they all go out their way to shake my hand.

"We have got really good characters and really good guys in the team this year and that's got to be one reason we are doing so well.

"Every player is first class and they understand what the Albion is - a real family club.

"The backroom staff are the same. Big Slaven - what a guy. The atmosphere in the group is fantastic.

"I just hope now we can go on and win promotion because I think we deserve it. The team have been so good to watch this year." 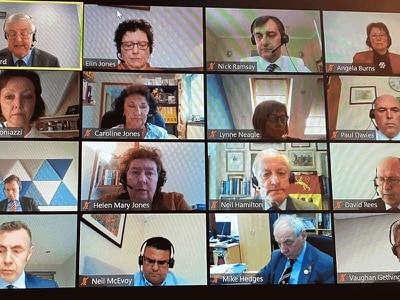