The most entertaining and pulsating Second City derby for many a year delivered both further evidence of Villa’s promotion credentials, along with a stark reminder of their flaws. 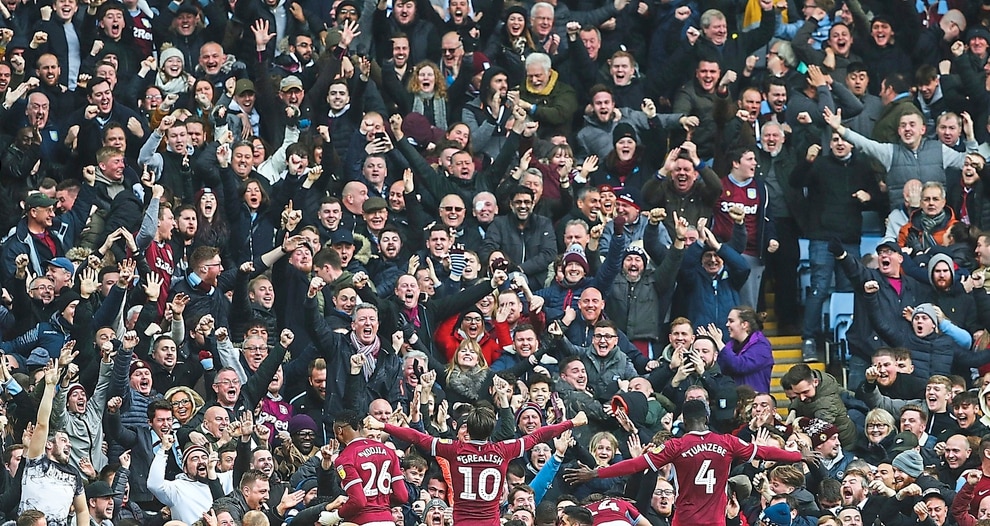 A fixture which has for most of its 131-year history been recognised for substance rather than style served up, on this occasion, a lunchtime feast for the TV viewer.

There were six goals – including one for the ages from Alan Hutton – along with enough talking points to keep the post-match discussion flowing until both teams resume their respective campaigns on Wednesday night.

Yet for Dean Smith, this undoubtedly special victory at the helm of his boyhood club came with more than a few causes for concern.

‘Rollercoaster’ was how Villa’s head coach later chose to describe it, though you imagine there were probably a few stronger words going round his mind while watching some of his team’s defending, most notably in the first half.

Big games often have a turning point and yesterday’s arrived in the 34th minute.

Blues, one goal to the good and looking comfortable, came within inches of doubling their tally when Che Adams, stretching, directed Craig Gardner’s vicious cross on to the post.

Five minutes later the visitors found themselves behind courtesy of goals from Jonathan Kodjia and Jack Grealish and, though the drama was far from finished, Villa were always favourites from that point.

It was ultimately a little extra quality which helped Smith’s men overcome their defensive fallibilities and there can be no disguising the fact theirs is a forward line clicking ominously into gear. The four goals scored here made it nine in the last three games and it is their big-name players who are starting to do the damage.

Grealish and Tammy Abraham, who scored their third from the penalty spot, have both found the net twice in the last three games, while Kodjia got the goal which eluded him in the 3-0 win at Derby prior to the international break and immediately looked a more confident player for it.

Yet while Villa’s firepower is considerable, Smith is astute enough to know it will not always be enough if they cannot address their issues at the back. Consecutive clean sheets against Bolton and Derby had been achieved in part due to both opponents missing golden chances.

Blues were not so generous. Their top scorer, Lukas Jutkiewicz, was left unmarked at a corner to volley home what was the opener and also his club’s first goal at Villa Park since April 2008.

There were other close shaves too, in addition to Adams clattering the post, while Villa were also guilty of giving away possession in their own half moments before Kristian Pedersen netted in the second half to breathe life back into the contest.

Such moments could perhaps be explained on the frenetic nature of a derby contest if the weaknesses, particularly when defending the high ball, hadn’t been evident for much of the campaign.

They are flaws which need fixing if this Villa team is ever to realise its full potential.

That said, it is unlikely the majority of the 41,200-strong crowd spent too much time last night focusing on the negatives.

For Villa supporters, this was another afternoon to savour and a win which extended their unbeaten run in league encounters against Blues to a record 13

It is a contest which, for decades to come, will be remembered for what happened in the 76th minute, when the unlikely figure of Hutton scored what might well be the finest goal ever seen in the fixture. At the very least, it is in the conversation.

Picking the ball up 10 yards inside his own half, the Scot set off toward the Blues penalty area, outpacing Jacques Maghoma and Craig Gardner.

Visiting skipper Harlee Dean stood in his way but - perhaps expecting Hutton to pass - allowed the Villa defender space to move cut inside and in the next moment the ball was destined for the bottom corner of Lee Camp’s goal with not a thing the goalkeeper could do about it.

It was a moment to win any match and for Hutton, perhaps the most memorable of his long-career. The 33-year-old is Villa’s longest-serving player but has not always had things easy since joining from Tottenham in 2011.

Yet while more cultured, fashionable full-backs have come and gone, Hutton has remained dependable and it appears Smith will be the latest in a succession of bosses to view him as an important part of the team.

His goal, particularly the manner of it, simply knocked the wind out of Blues, securing a third straight Championship win for Villa for the first time this season.

If the classy win at Derby was the result which indicated their campaign is well and truly up and running, this one confirmed it.

Maintaining momentum will now be key for Villa in a week which continues with the visit of Nottingham Forest, before Saturday’s long trip to Middlesbrough for a re-match of last season’s play-off semi-final.

A run of fixtures which a few weeks ago looked foreboding now appears more a chance to make some inroads into the gap to the top six, which remained at four points after the weekend.

Four of the next five for Smith’s men are against teams above them, with dates against Albion and Leeds to follow before Christmas.

In a division where none of the contenders are without flaws, Villa will be confident of causing damage.

Yet it is addressing their own weaknesses which will likely be the key to sustained success.

Lee Hendrie: I lost £10m and tried to take my own life