25 years at Bescot: The stadium that changed Walsall's fortunes

The Saddlers are celebrating a quarter of a century since they moved away from Fellows Park.

"Welcome to the Bescot Stadium," said then-club secretary Roy Whalley in his programme notes on August 18, 1990.

"This is a moment of pure magic, an unattainable dream that has become reality."

Situated just a half a mile down the road from Fellows Park, the opening of a new multi-million pound stadium in Bescot signalled the dawn of a new era for Walsall Football Club.

It is now 25 years since Sir Stanley Matthews opened the ground, which at the time was only the second new stadium to be constructed in England since the 1950s.

Bescot wasn't just a new chapter in the Saddlers' history; it contributed greatly to saving the club from going out of business.

It all started out as a boardroom pipe dream hatched by Barrie Blower and Jeff Bonser during some of the club's darkest days. Walsall's fortunes had undergone a rapid decline since promotion to the old second division was secured in 1988.

Top scorer David Kelly was sold and supporters were forced to endure a truly miserable season that culminated in relegation on the back of 15 consecutive defeats.

Things deteriorated further in 1989/90 when the club finished rock bottom and were sent down to the fourth tier. It's fair to say that the club was in freefall.

It was not an easy time to be a Walsall fan. But amongst all the misery there was one ray of light. In April 1989 work had started on the new £3 million stadium at the site of a derelict sewerage plant in the Bescot neighbourhood.

The club's ambitions had long been held back by the dilapidated conditions at Fellows Park. The old ground had served as Walsall's home since 1896.

It had hosted some pivotal games in the club's history, including the clash against Newcastle United in August 1961 that was seen by Saddlers' record crowd of more than 25,000.

But the ground's best days were long gone, and its collection of disparate stands served as the antithesis of the idea of the modern football stadium.

Club bosses wanted a stadium from which they could maximise revenue, offering top-class facilities, the use of which could extend beyond the world of football.

To that end the idea for a new stadium was born.

By the end of 1989 the concrete terracing had been laid and the bulk of the stadium's steel frame had been erected, complete with 28 supporting stanchions.

Sponsorship for two of the four stands was quickly secured and gradually all of the 13 executive boxes were sold. By the spring of 1990 seats were installed and the pitch was laid.

When workers moved off the site that summer they left behind a gleaming new 11,104 capacity stadium and a 1,200-vehicle car park. Fellows Park was now a distant memory, by now demolished and replaced with a Morrisons supermarket.

Bescot was ready for football. Despite the fact that the Saddlers were about to start life there in the fourth division, many supporters saw the new home as a sign of better times ahead.

On August 18, 1990, Bescot hosted its first game when Walsall welcomed an Aston Villa side featuring the likes of Paul McGrath and David Platt.

Prior to kick-off there was a sense of excitement ramped up by a bumper crowd of more than 9,500.

"Today, Walsall and Aston Villa supporters will have the opportunity to sample the facilities for the first time," Whalley wrote in his programme notes.

"Those attending will be participating in the making of soccer history.

"Let us hope that it is a memorable occasion that will live in our memories for many years to come."

It was the great Sir Stanley Matthews who strolled out onto the pitch and cut the ribbon to declare the stadium officially open. Perhaps unsurprisingly, top flight Villa left the lavish new ground with a 4-0 win.

But the imagination of Saddlers fans had been captured and 5,219 came back the following week to watch their team draw 2-2 with Torquay in Bescot's first competitive fixture.

Walsall could now boast one of the most modern and safety-conscious grounds in the country. The significance of the move was outlined by Whalley at the time.

He said: "The only way that the club was to survive was by building this stadium.

"Of course our supporters were sentimental to Fellows Park and we received some opposition to our plans, but the move has given the club a real morale boost and we find ourselves ahead of every other club in the league."

The stadium continued to evolve. In 1992 Whalley established the Sunday market at the stadium – a popular event that is still held there to this day.

In the same year the away stand was filled with seats and plans were unveiled for a pair of huge advertising hoardings facing the M6 motorway that would be built on top of the William Sharp Stand.

These signs sealed the stadium's iconic place in the eyes of passing motorists.

Thousands of commuters travelling through the Midlands on the motorway network will never have set foot inside the ground. But most will have glanced at it through the car window, their eyes drawn to the illuminated boards.

The hoardings would also provide a boost to club coffers, with South Korean electronics giant Daewoo agreeing the then-biggest sponsorship deal in the club's history in 1993.

Facilities for disabled supporters at Bescot were rated as some of the best in the country, with the Saddlers named Divisions Four's family club of the year from 1992 to 1994.

As the 90s rolled on the club became more financially stable, with a then-record turnover of £1.9m announced in 1995 as the club celebrated promotion under Chris Nicholl.

In 2002 came major redevelopment, with the Gilbert Alsop terrace transformed into a two-tier, 4,000-capacity stand that was sponsored by Black Country firm Purple Loans.

A new gym and media room were built within the Main Stand the following year, and when seats were installed into the lower tier of the Purple Stand the stadium became an all-seater venue for the first time.

By now Bescot had seen the Ramada Encore hotel open on-site and a new club shop had been built under The Bonser Suite. But the biggest development would come when a deal was struck with brewery giant Banks's that saw the ground renamed as Banks's Stadium. The news came on the back of Walsall's second title-winning season in its history.

This year the stadium was able to fit in a pair of iconic moments before its silver anniversary.

In June the pitch was boarded over and a 66-metre-wide stage was erected as Elton John came to town. The Rocket Man's stunning show will live long in the memory of the 14,000 fans lucky enough to be there.

On the pitch a goalless draw with Preston in January booked the Saddlers their place at Wembley for the first time in their 127-year history. Already 2-0 up from the first leg of the Johnstone's Paint Trophy area final, Smith's men needed only to avoid defeat.

And on a tense evening, Walsall held on despite a frantic finale.

Upon hearing the full-time whistle, thousands of Walsall supporters descended on to Banks's pitch to celebrate. "It's an amazing achievement," manager Dean Smith said afterwards. "It's history and I'm proud to be the first manager to take us to Wembley."

History indeed. And with Banks's Stadium still in its infancy, here's to plenty more historic moments. 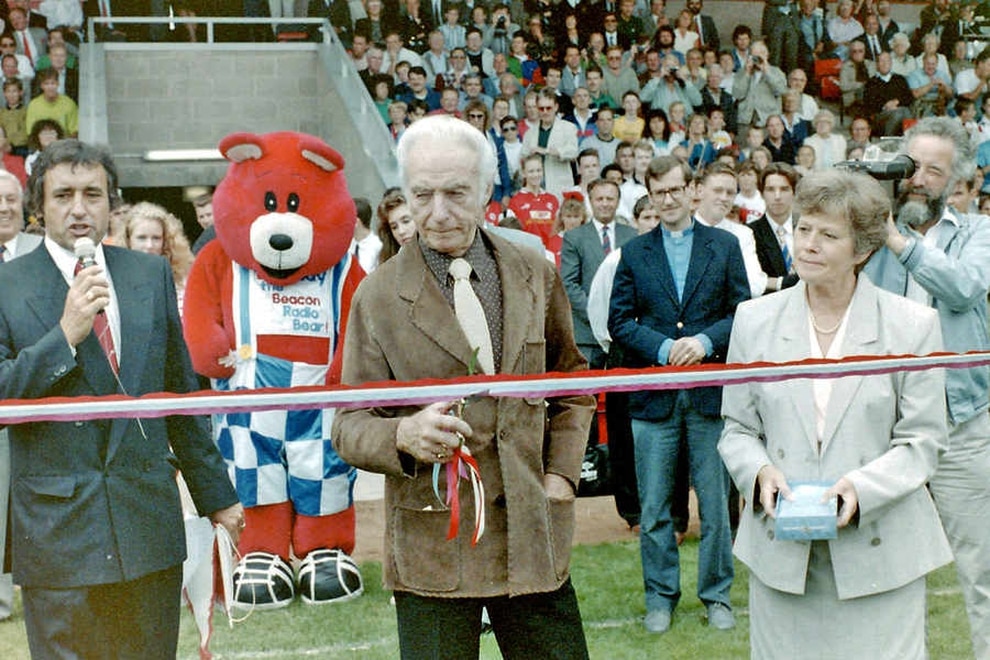 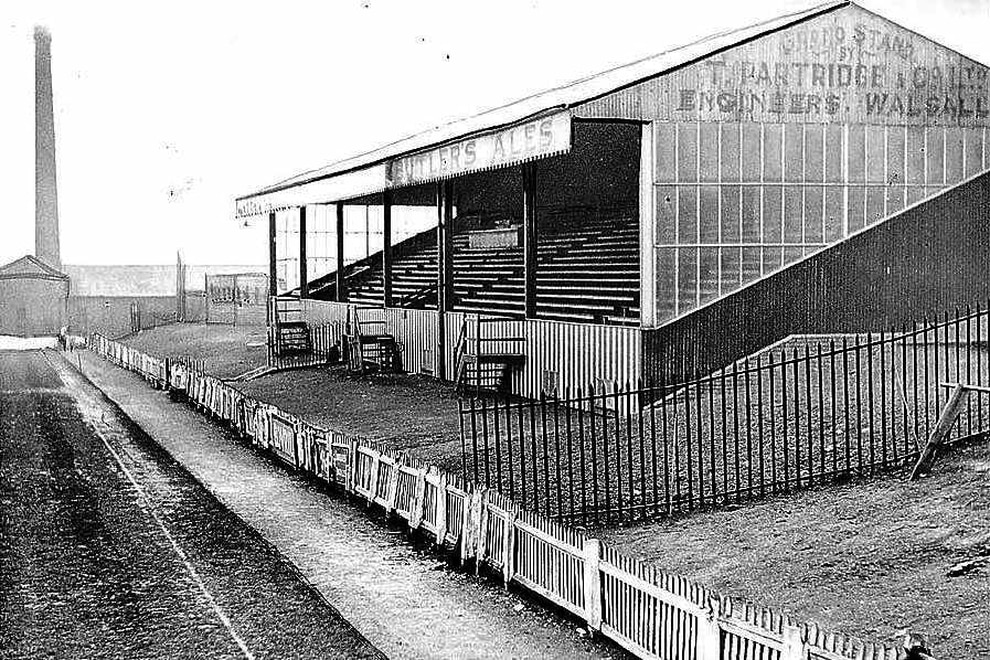 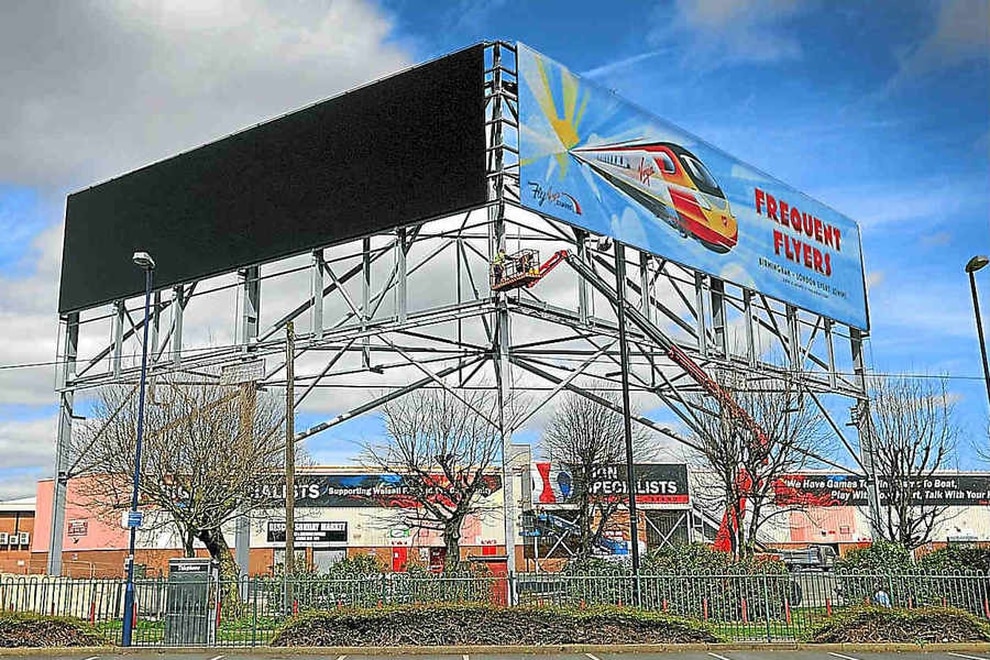 The well-known electronic advertising boards by the M6 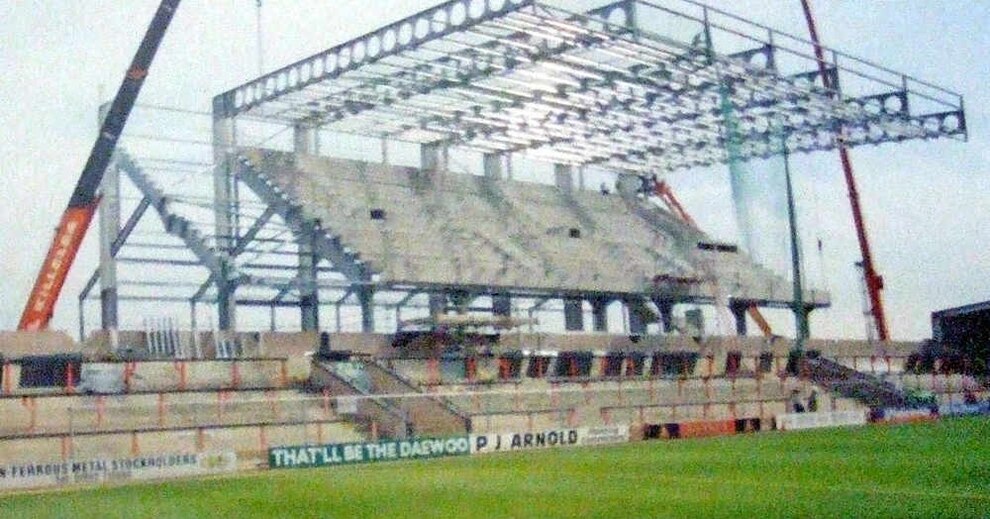 Construction to the stadium taking place during the 2002-2003 season 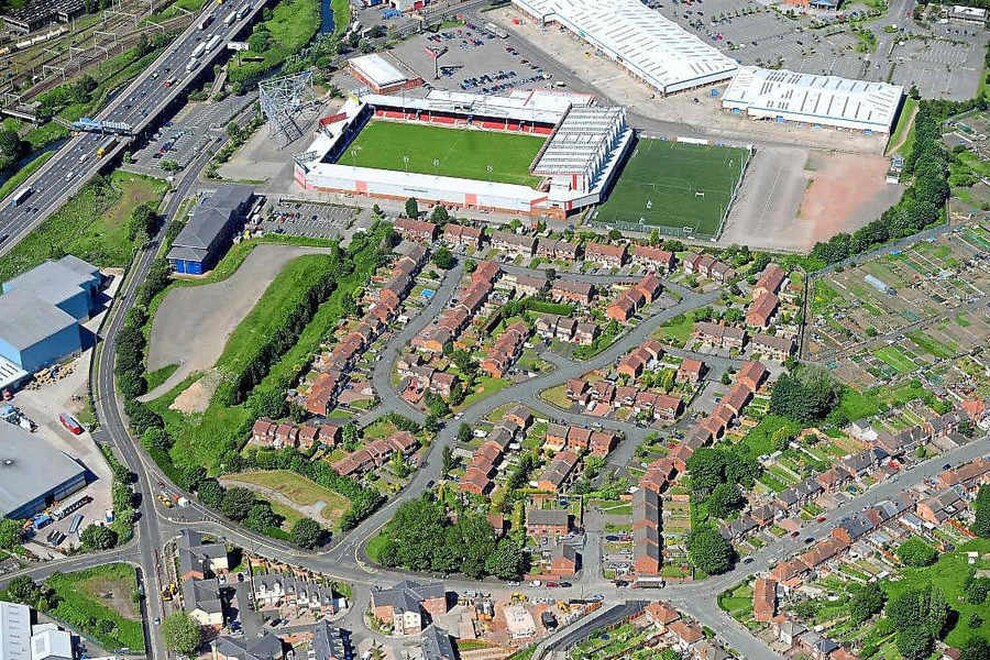 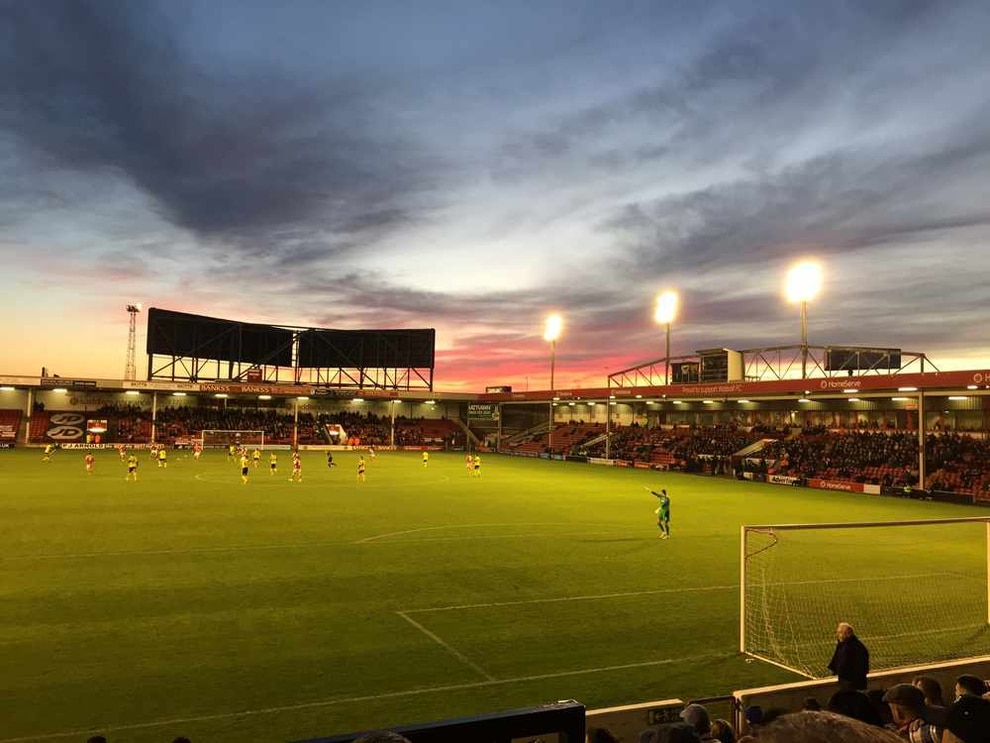 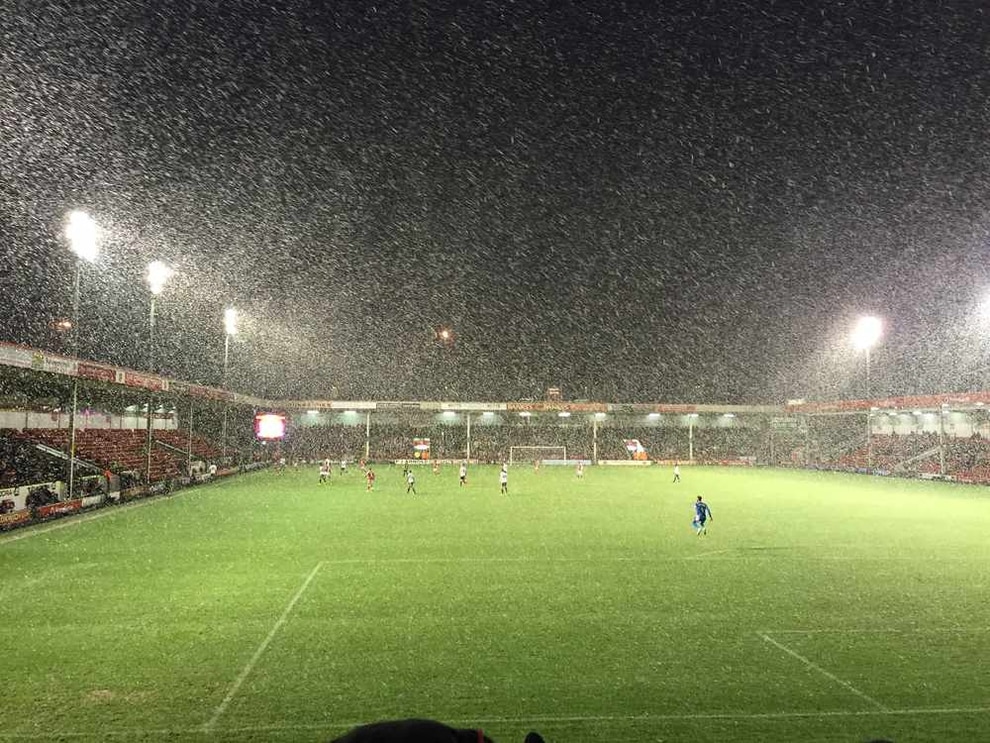