The Oa Giants completed the swim between Scotland and Northern Ireland after setting a record for the North Channel a week before.

A group of swimmers from Northern Ireland have conquered one of the most challenging stretches of water in the British Isles.

The Oa Giants became the first to complete the swim between Islay in Scotland and the Giant’s Causeway in Northern Ireland at the weekend, after setting a new record for the North Channel the previous weekend.

Padraig Mallon, a director of Infinity Channel Swimming, who steered the pilot boat, told the PA news agency that the six men are the first to have completed the Oa Channel.

He said the channel is so challenging because of strong currents where the Atlantic Ocean meets the Irish Sea and the sea from the Scottish islands, as well as swirling eddies around Rathlin Island.

Jacqueline McClelland, also a director of Infinity, said the swim has been planned since 2014, but it took years for the right conditions of weather, tides and a strong enough group of swimmers to come together.

The record, set from the Gobbins in Co Antrim to Portpatrick, Scotland, on Sunday August 2, took nine hours, two minutes and 41 seconds, as verified by the Guinness Book of Records.

Mr Judge, from Portadown, Co Armagh, was first in the water on the Oa swim and described it as a “real mental battle”.

“I dove in and hit two lion’s mane jellyfish straight away, one up the face, then had to navigate through them to land … the videos at the start look beautiful and picturesque but people don’t realise what you are seeing in that water,” he said.

They took turns to swim through the night, starting at 8pm on Saturday evening.

Mr Judge, who previously completed the North Channel swim solo, described his stints as three of the toughest swims he had ever done.

“At times morale was really down on the boat. We had six quality swimmers – four of us can knock out 5kph – we were getting in, knocking our pan in, getting out to find we had only 2km done, and sometimes maybe sideways,” he said.

“The last two hours you really saw the whole boat, whole crew coming to life and roaring the swimmers in the water home.”

At 38, Mr Judge was the youngest in the team, and said he felt you need to be older to complete such challenging swims.

“I couldn’t have done these sorts of swims at a younger age. I think when you get a bit older you gain a bit of weight, which helps, but also you need a few things to have happened in your life, maybe bad things, to know how to dig in,” he said.

“Eighty per cent of it is mental, when you have went through a few things in your life, it definitely helps you in that channel.”

While most of the sea life they saw were jellyfish and seals, the North Channel swim saw a mother and infant dolphin join Mr Donnelly in the water.

There are limited windows of opportunity each year to swim the North Channel when the water temperatures and weather are milder, and during a neap tide.

Three people had attempted the swim by Wednesday but had not been successful, with five more to try in the coming weeks.

Mr Mallon said several swims have been delayed until next year after the closing of pools due to the coronavirus pandemic interrupted training. 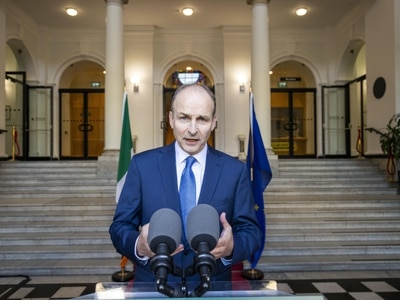