The pilot study launches on Thursday and will cover regions across England.

Tens of thousands of people who work in high-risk jobs, such as taxi drivers, cleaners and shop workers, will be tested for coronavirus even though they have no symptoms, the Government has announced.

The Department of Health and Social Care (DHSC) said the pilot study, which begins immediately, would improve understanding of the prevalence of the virus in asymptomatic people in higher-risk jobs.

It is believed that people without symptoms can spread coronavirus to others without being aware that they are infectious.

Workers will be given a one-off test to see how common asymptomatic Covid-19 is among these groups.

Local authorities in Bradford, Newham, Brent and Oldham will also select groups of people for asymptomatic testing who are deemed to be high-risk.

The DHSC said each business will receive thousands of tests for staff via home-testing delivery or a mobile testing unit.

Those who test positive will need to self-isolate and results will be shared with the NHS Test and Trace programme so contacts can be traced, the DHSC said.

It comes as Prime Minister Boris Johnson missed his target for all in-person tests to be turned around within 24 hours by the end of June.

On June 3 he told MPs in the Commons: “I can undertake to him (Tory MP Jeremy Hunt) now to get all tests turned around within 24 hours by the end of June except for difficulties with postal tests or insuperable problems like that.”

But the latest NHS Test and Trace data shows that 91% of in-person tests at regional and mobile testing units were returned in less than 24 hours for the week ending July 1.

Overall, 31,421 people who tested positive for Covid-19 in England had their case transferred to the NHS Test and Trace contact tracing system during the first five weeks of its operation, the figures also showed.

A further 980 people (3%) could not be reached because their communication details had not been provided.

The figures cover the period May 28 to July 1.

During that time, 144,501 people who had been identified as recent close contacts of people who had tested positive were reached and asked to self-isolate.

The number of people identified as close contacts fell in the last week of the data, with officials saying this was due to fewer contacts being in care homes.

The percentage of people reached who tested positive fell slightly in the week ending July 1 to 77.4%.

When combining the figures for all methods of community testing – home test kits, regional test sites, mobile testing units and “satellite” test centres – a total of 54.9% of people received their results within 24 hours in the week ending July 1, up from 41.3% in the previous week.

“This week we have seen test turnaround times improve further, with the majority of positive cases reached by contact tracers in under 24 hours.

“Anyone with symptoms can easily book a test, expect rapid results, and will hear promptly from NHS Test and Trace if they are tested positive.”

Dr Billy Palmer, senior research fellow at the Nuffield Trust, said: “Ten billion pounds so far, thousands of lives, the economy and the country’s ability to protect the NHS from a second national spike has been pinned on a credible and effective track and trace system.

“But each week the percentage of people who could have been exposed to the virus asked to self-isolate is falling.

“We have a leaky system and need to do a lot better to reach the ‘world beating’ approach  promised.

“It is still likely that we are missing a large proportion of people in the first instance, and of those reached we then lack key information which underpins the process.

“Data provided so far is opaque with no regional breakdowns or the numbers provided for those then following the advice and going on to self-isolate.” 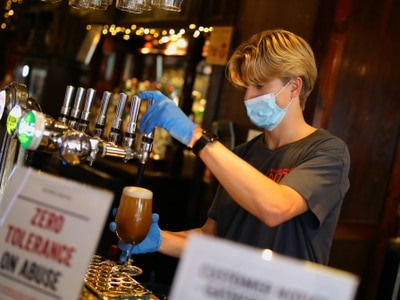