The Prince of Wales championed Britain’s rural tourism when he visited celebrity farmer Adam Henson’s farm attraction – and found himself surrounded by piglets.

Charles toured Cotswold Farm Park – a rare breed centre visited by 150,000 people a year – which opens its doors to the public on Saturday after months of closure due to the coronavirus outbreak.

The heir to the throne was keen to learn how the attraction and a 1,600-acre holding both run by Henson, who co-presents the BBC’s Countryfile programme, were coping during the pandemic which has seen businesses suffering financially.

In a lighter moment, the prince was taken into a small field and shown an inquisitive Gloucestershire old spot sow and her energetic piglets, after Henson tempted them over by pouring feed into a trough.

Charles is a passionate farmer who runs Home Farm in Gloucestershire by his organic principles, and in the past has reared the rare breed pigs, which were traditionally kept in orchards and known for their high-quality meat before falling out of favour.

He was also introduced to Victoria, a 19-year-old Suffolk Punch horse – another rare breed – and posed for a picture with the imposing animal.

Henson said: “I know he wanted to come to make a statement, to get it out there, the value of rural tourism, rare breeds, conservation and education – that’s very much what we’re about.

“We’re a big commercial farm but the diversification and rural tourism part of our business is essential, but has been suffering seriously during Covid-19, as so many other businesses have.”

Mr Henson said more than 50 of his staff had been furloughed but workers were now returning for the opening at the weekend, with bookings taken online and the farm operating at half capacity, with staggered entry and the campsite was also open.

The royal family have been slowly returning to public duties as lockdown restrictions have been relaxed, and Charles has already attended a ceremony welcoming France’s President Emmanuel Macron to the UK and met health and care workers at a hospital in Gloucester last month.

He wore sturdy shoes and casual trousers, with a shirt, jacket and tie, for his tour of the visitor attraction and social distancing was maintained throughout the visit.

When Charles was taken to see the Suffolk Punch the forecast rain began to fall heavily and he sheltered under a umbrella as he spoke to Mr Henson about the plight of working horses like Victoria.

The prince who is patron of the Rare Breeds Survival Trust (RBST) said: “It’s a real uphill struggle to get people to understand how valuable they are.”

He walked past small fields filled with unusual sheep, goats and cattle – some of the 50 rare breeds across seven species on show at Cotswold Farm Park.

Charles smiled when he saw a goat with its head caught between the gap in a wooden fence and joked with husband and wife Mark and Sam Adamson who manage the farm’s campsite.

Mr Adamson said: “The prince told us a story about how he found a deer with its head stuck in a fence and he had to get on its back and pull its horns back like he was riding a motorcycle to free it.” 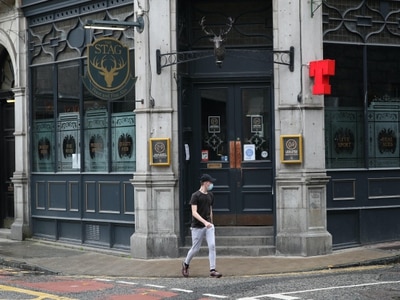