Boris Johnson set out plans for a £5 billion spending spree as the country is braced for the economic impact of the pandemic.

Boris Johnson has announced a spending spree to help the economy cope with the “aftershock” of the coronavirus crisis.

The Prime Minister promised his response would not be a return to the austerity that followed the financial crisis, but instead a stimulus package inspired by US president Franklin D Roosevelt, who led America out of the Great Depression with his New Deal in the 1930s.

Mr Johnson returned to the theme of his general election campaign, promising to “level up” parts of the country that had been left behind while London and the South East prospered.

In a speech in Dudley – a seat the Tories took from Labour – the PM promised to tackle the “unresolved challenges” of the last three decades, highlighting problems in building, social care and the economy.

He acknowledged that jobs which existed in January “are not coming back” after the coronavirus crisis, and the furlough scheme which has seen the state pay people’s wages cannot continue forever.

Promising to “build, build, build” his way out of the crisis, Mr Johnson said he would slash “newt-counting” red tape in the planning system to speed up delivery of infrastructure projects and homes.

Opposition MPs accused him of not offering any new ideas and trying to “hoodwink” voters with rehashed manifesto promises, while critics pointed out that the sums promised by the Prime Minister were dwarfed by the funds Mr Roosevelt had spent.

– £1.5 billion to be allocated this year to hospital maintenance;

– More than £1 billion for a 10-year school rebuilding programme;

The Prime Minister acknowledged “it may seem a bit premature to make a speech now about Britain after Covid” given events in Leicester, where a local lockdown has been imposed.

But “we cannot continue simply to be prisoners of this crisis” and the country “needs to be ready for what may be coming”.

“We’re waiting as if between the flash of lightning and the thunderclap with our hearts in our mouths for the full economic reverberations to appear,” he said.

Chancellor Rishi Sunak will set out a plan to support the economy through the first phase of the recovery next week, Mr Johnson said. 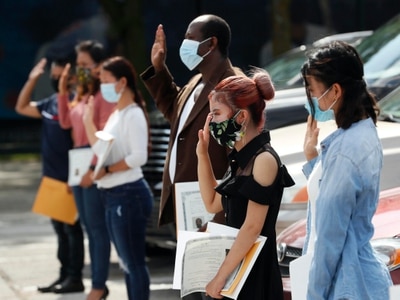