The funding will be made available immediately to protect and restore the habitat, including in areas affected by the current fires.

Boris Johnson has promised £10 million to help protect the Amazon rainforest and called on world leaders to step up efforts to save endangered species.

The funding for the South American rainforest will be made available immediately to protect and restore the habitat, including in areas affected by the current fires.

The Prime Minister will use the G7 summit in Biarritz to call for ambitious new targets to halt and reverse the loss of habitats and species, arguing that efforts to protect biodiversity and tackle climate change are “two sides of the same coin”.

Before a G7 session on the environment on Monday, Mr Johnson said: “In a week where we have all watched, horrified, as the Amazon rainforest burns before our eyes, we cannot escape the reality of the damage we are inflicting on the natural world.

“The planet faces two immense threats: Climate change and biodiversity loss. These are two sides of the same coin – it is impossible to solve one challenge without fixing the other.

The UK hopes to host the major COP26 climate change conference in 2020 and Mr Johnson said if its bid is successful the event “will have as a major focus the solutions to climate change that can be found in nature – such as reforestation”.

He will urge leaders to adopt new targets to restore the natural environment that are more ambitious than the existing Aichi goals which expire in 2020.

“As the world’s largest economies we owe it to all nations and to future generations to do better.

“We cannot sit back as animals and plants are wiped off the face of the planet by mankind’s recklessness. If we do not act now our children and grandchildren will never know a world with the Great Barrier Reef, the Sumatran tiger or the black rhino.

“It is not good enough simply to halt the tragic and unprecedented loss of habitats and species – we must urgently reverse this appalling trajectory, before it is too late.”

Mr Johnson, whose girlfriend Carrie Symonds works for an ocean conservation group, will urge the G7 to do more to protect the seas.

He will call on them to back Britain’s call to protect 30% of the world’s ocean by 2030 – to reverse the damage being done by overfishing, plastic pollution and climate change.

A further £7 million will be promised to extend the UK’s work to protect and manage vital marine ecosystems in conservation areas around Britain’s overseas territories.

Aaron Kiely, climate campaigner at Friends of the Earth, said: “It doesn’t add up for the Government to commit to global biodiversity and pay the usual lip-service to the climate emergency while cutting fuel duty at home.

“Nothing short of radical changes are needed right now and getting off our oil addiction is long overdue.

“All the more reason why effectively encouraging more driving – probably to keep a segment of voters happy – shows a fundamental lack of seriousness.

“Funding to protect the Amazon is not to be sniffed at but better yet, we could listen to the indigenous people who live there and know perfectly well what is needed to prevent a worsening crisis: leave their land alone.”

Labour spokesman Barry Gardiner said the “tragedy unfolding in the Amazon should not be used as a PR stunt”.

He said: “The truth is that £10 million is an embarrassingly tiny contribution to deal with the situation in the Amazon which is part of the sustained anti-environment campaign being waged by a right-wing Brazilian government.

“Boris Johnson’s Government has pointedly refused to ensure that UK companies are not aiding and abetting the destruction of the Amazon by ruling out from any trade deal beef raised on rainforest land burnt out by ranchers.”

Man jailed for killing girlfriend by throwing phone at her neck 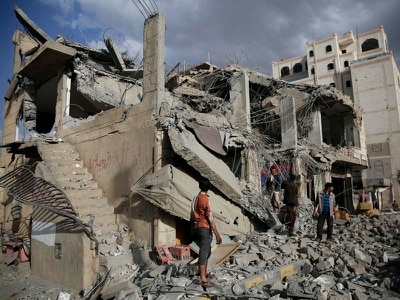