A new crossing has been installed on a busy stretch of road in Oldbury where a pensioner was killed in a horror crash.

Sandwell Council highways bosses have installed a new toucan crossing on the A4123 Wolverhampton Road, between its junctions of Castle Road East and Castle Road West.

Speed cameras are also set to be installed in the area in the coming months.

It comes after a petition was launched by residents after 85-year-old Edward Harris died after a crash at the junction, near the busy Birchley Island, in 2016.

Mr Harris’ Honda Jazz car was struck by an Audi, driven by personal trainer Kamran Raja, who was jailed for 10 years. Mr Harris had been to church and was travelling home having dropped his daughter off minutes earlier– giving her a final kiss goodbye.

His daughter Annette Hall, who had been to Our Lady and St Hubert’s Church, Oldbury, with him just beforehand, paid tribute to her father at the time, saying: “He was a gift beyond compare. We never had a chance to say goodbye and to thank him.”

Raja last year applied to the Court of Appeal to have his sentence reduced – but judges concluded he deserved every day of his decade-long sentence and rejected the bid. Raja, of Acocks Green, Birmingham, initially pleaded not guilty, blaming Mr Harris for the collision but changed his plea at the last minute.

Witnesses spoke of Raja driving like an ‘idiot’, aggressively overtaking and undertaking other motorists, the Appeal Court heard. Mr Justice Dingemans said that the attempt to blame the victim, combined with Raja’s long record of driving convictions, made the offence worse. Mr Harris was performing a normally safe manoeuvre, crossing the dual carriageway, when his car was hit by Raja’s high-powered Audi.

A total of 842 people signed a petition, which was then considered by Sandwell Council. Copies of the petition were left at a pub, school and church after being set up by Castle West Road resident Elizabeth Smith.

Mrs Smith, who witnessed the crash which killed Mr Harris, previously said that accidents occur as frequently as twice a month on the stretch of road.

She said: "Walking is definitely a gamble – we need it looked at as soon as possible. All that encouragement to walk to school but it is just too dangerous.

“It is definitely a gamble – we need it looked at as soon as possible.

“There are lots of accidents and there have been lots that do not even get reported. There are accidents there at least twice a month.” 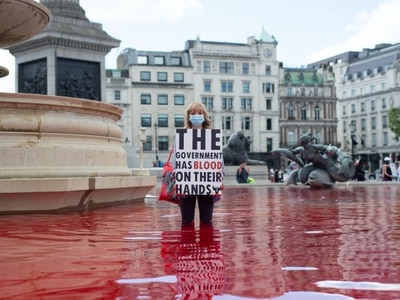