Domestic violence increased as fights and house parties kept West Midlands Police busy on 'Super Saturday' while in Staffordshire police received almost as many 999 calls as on New Year's Eve.

Senior offices at West Midlands Police said that while it was a very busy night for 999 calls, very few were in relation to trouble at drinking establishments across the region.

Three arrests were made after disorder at a pub in the Sandwell area and one person was arrested to prevent a breach of the peace in Birmingham, Chief Superintendent Steve Graham said.

Meanwhile Staffordshire Police received 449 calls to 999 between 7pm and 4am - double the number recorded on an average Saturday night in July 2019 and just fewer than the 488 recorded on New Year's Eve.

Pubs, bars and restaurants were officially allowed to open for the first time in more than 100 days on Saturday

Government guidance stated that venues could reopen as long as they adhered to social distancing and safety measures that protected both staff, customers and the public.

West Midlands Police said they received a high level of calls during the early hours of Sunday morning reporting fights, house and street parties and loud music as well as an increase in reports of domestic abuse.

Ch Spt Graham, police commander, said: "It has been difficult for many businesses recently, it was great to see them open again and people out having a good time, while being sensible and observing the social distancing measures that are in place.

“We saw people taking great personal responsibility for their actions and behaviour and the evening ran smoothly with only a handful of incidents at pubs and bars reported to us.

“Three arrests were made following reports of a disorder at a pub in Sandwell and one person was arrested to prevent a breach of the peace in Birmingham.

“Our officers were on hand to assist designated premises supervisors and security teams. We were impressed with the compliance of the majority of people who came out to enjoy the eagerly awaited reopening of pubs and bars within our vibrant cities and towns, thank you to everyone who played their part in keeping us all safe."

He added: “It was a busy evening, with lots of people deciding to host house or street parties or visit their local pubs instead of heading into those in our larger cities and towns.

"Sadly some of these resulted in police being called following complaints about drunken behaviour, noise nuisance and fighting.

“Lockdown has been tough for everyone; while we understand that people were excited about the easing of restrictions, it’s a shame we saw some pockets of disorder and violence on our streets. This is not acceptable and we’re doing all we can to find and deal with those responsible.”

Staffordshire Police said the majority of calls received were due to drink-related disorders and anti-social behaviour despite most people behaving themselves in pubs and bars.

The force's Chief Constable Gareth Morgan said: “We understand that a lot of people were eager to get out as restrictions lifted and I’d like to thank the majority of people who did so responsibly, adhering to government guidelines and to the procedures local bars and restaurants had in place.

“As expected, calls for service increased substantially and we received a number of reports of violence, anti-social and drunk and disorderly behaviour. Colleagues and partners worked hard to ensure all eventualities were planned for and I am grateful for the ongoing and collaborative effort to keep people safe."

Two teenagers have been arrested after one of the force's special constables was left with a fractured cheekbone after being attacked in Market Place, Uttoxeter.

“My thoughts and well wishes are with the Special Constable who was injured while fulfilling his duties serving his local community," Ch Con Morgan added.

"Any attack against a police officer is absolutely despicable and I know it will be condemned by the public. I am clear when I say this behaviour will not be tolerated - officers do not deserve to be treated in this way.

“We continue to have robust plans in place as we all get used to a new normal with more premises opening and we would urge people to continue to be sensible during what is still an unprecedented time.

“The crisis isn’t yet over - Coronavirus remains a serious risk and people need to continue to be sensible and follow Government guides which include social distancing and increased hygiene measures.”

Health Secretary Matt Hancock said the vast majority of people who went out on 'Super Saturday' were "doing the right thing" and following social distancing.

Speaking on Sky's Ridge On Sunday, Mr Hancock said: "Well I think that from what I have seen, although there's some pictures to the contrary, very, very largely people have acted responsibly."

He added: "So overall I'm pleased with what happened yesterday. It was really good to see people out and about and largely, very largely social distancing."

Mr Hancock said "the large proportion of people, the vast majority of people are, I think, doing the right thing".

He added: "But of course we'll take action when we need to when... if the minority break the rules."

On those who did not social distance, Mr Hancock said: "Well we'll of course keep this very closely under review, and you've seen for instance in Leicester but also in other places that we don't shirk from bringing in more drastic measures if that is what's needed to control the virus." 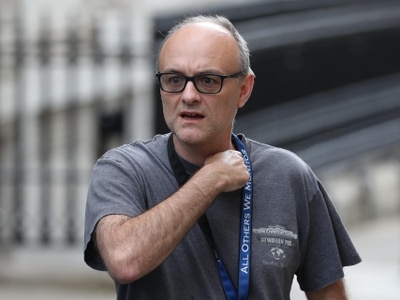