Over the past 35 years it has provided more than 2,500 young people from a rich variety of backgrounds to perform across the world.#

And if it doesn't find a new home within the next year or so, it could soon be lost from Wolverhampton.

The city's Central Youth Theatre faces an uncertain future after plans to move into the former Co-op building opposite Wolverhampton Grand Theatre fell through.

At the moment the centre is split between the former Stowheath Day Training Centre in the East Park area of the city, where its vast collection of costumes, props and scenery is stored, and the Newhampton Arts Centre in Whitmore Reans.

But the group has been told it will need to vacate Stowheath shortly, leaving it with nowhere to keep the thousands of items it has built up over the past three-and-a-half decades.

CYT has led a nomadic existence since it was founded by Jane Ward in 1983, and it is not the first time its future has been in doubt. But Jane, who was appointed an MBE for her work with youth drama in 2013, says this is the biggest threat yet. 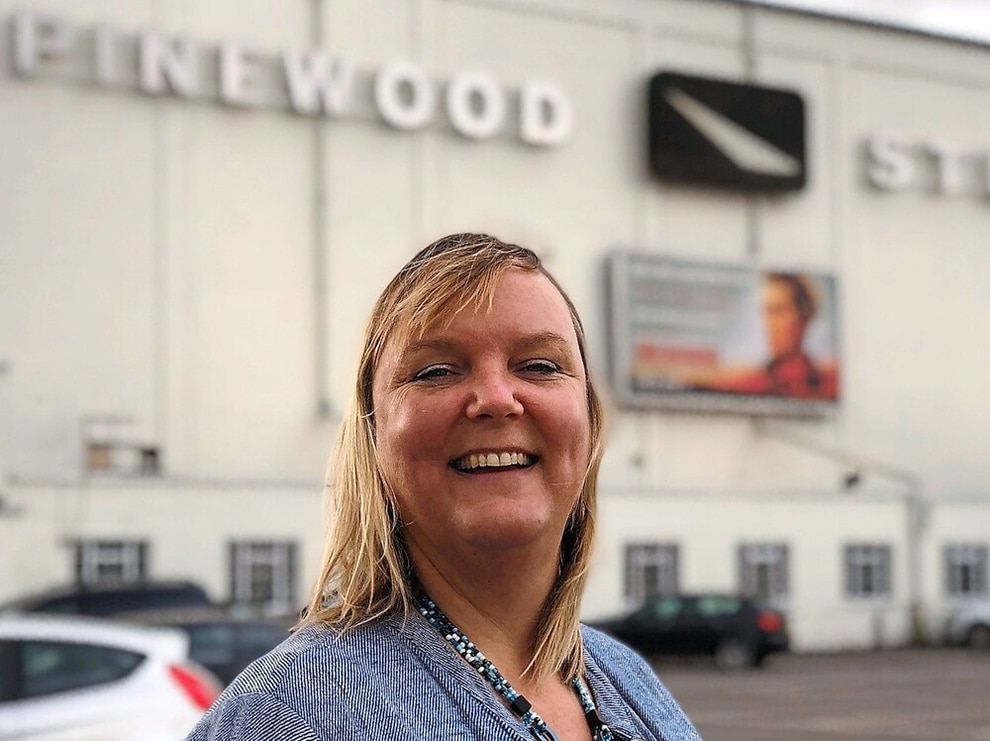 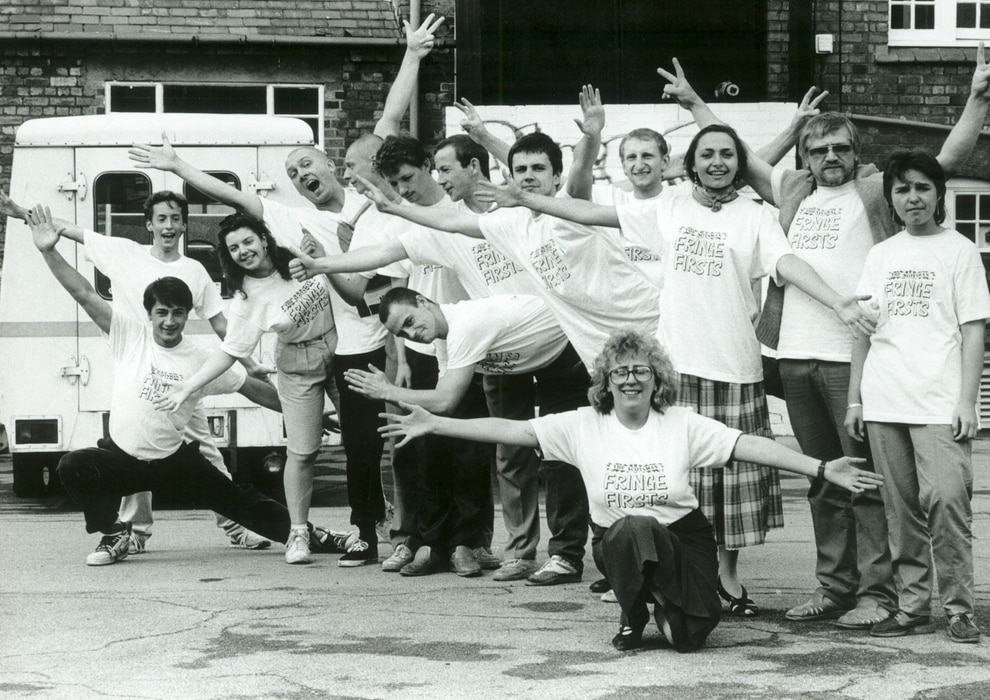 Members of a Lithuanian drama group brought their own brand of theatrics to Wolverhampton at the invitation of Central Youth Theatre director Jane Ward. They were in town in September, 1990, after Miss Ward met them during an exchange trip in Moscow the previous year, and she arranged for them to appear at the Edinburgh Festival. 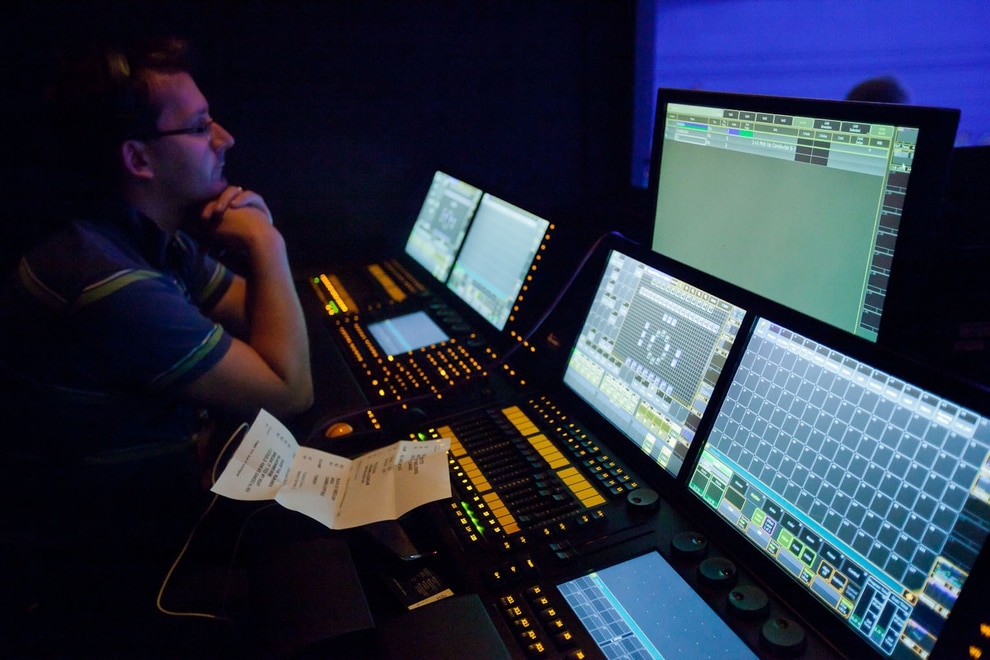 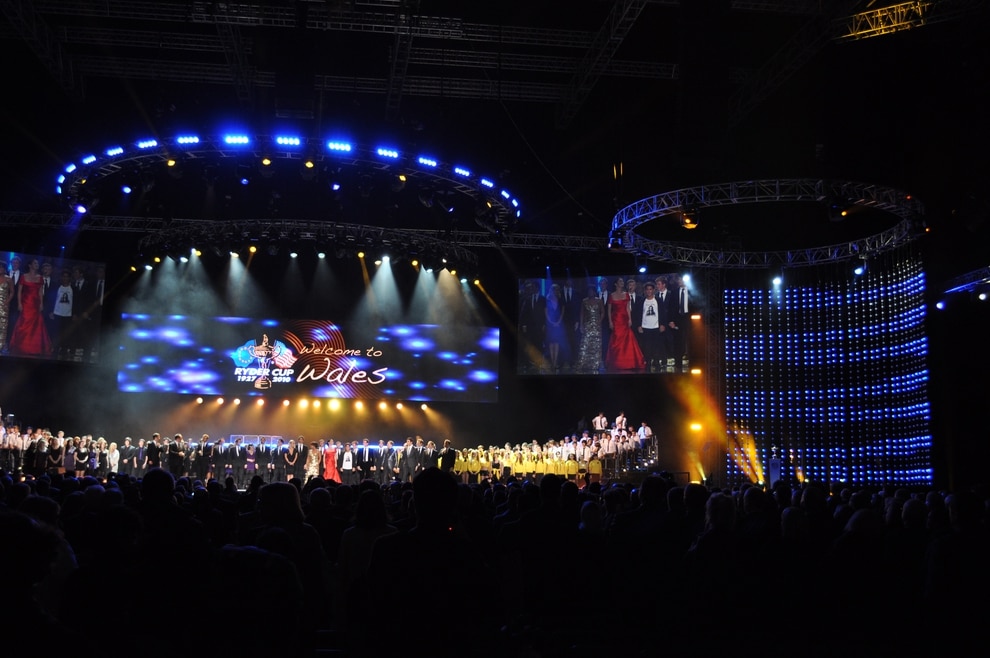 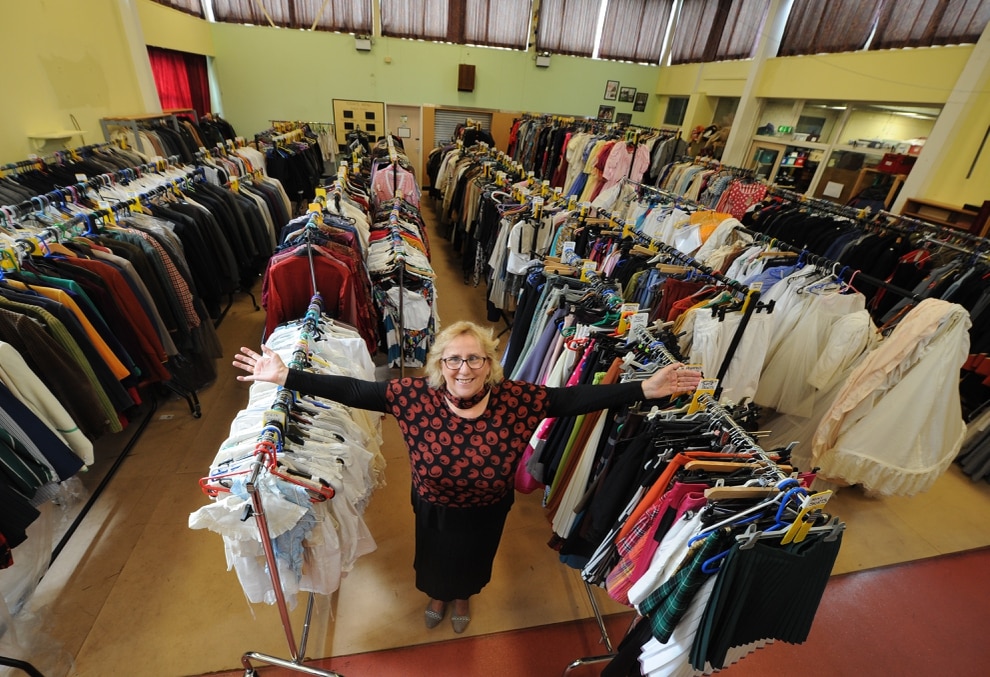 Jane Ward with some of the clothes at CYT's Actors' Wardrobe 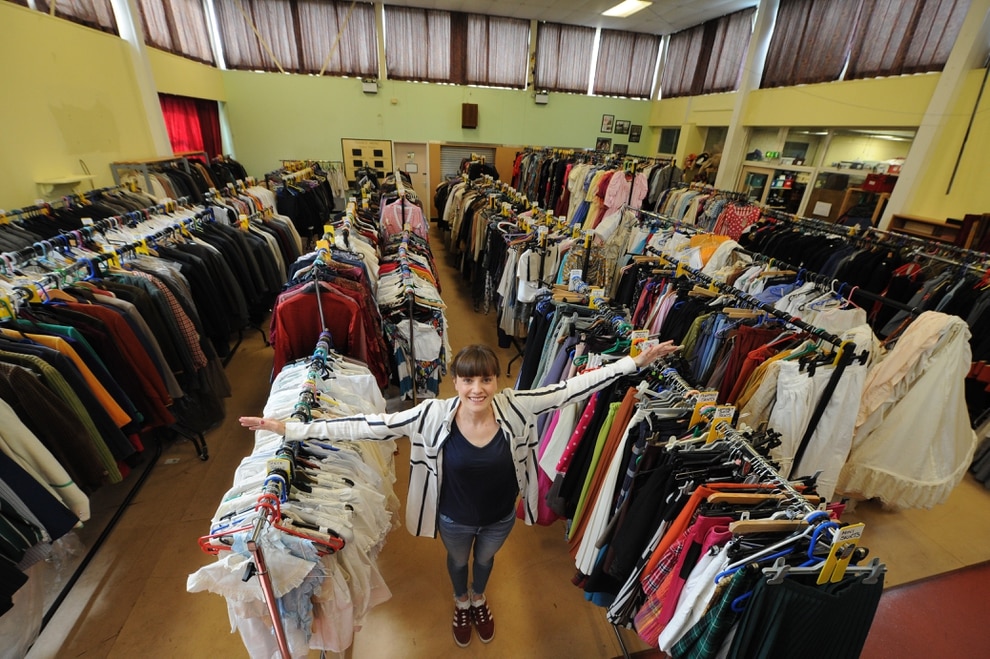 Holly Parry shows of some of CYT's costumes 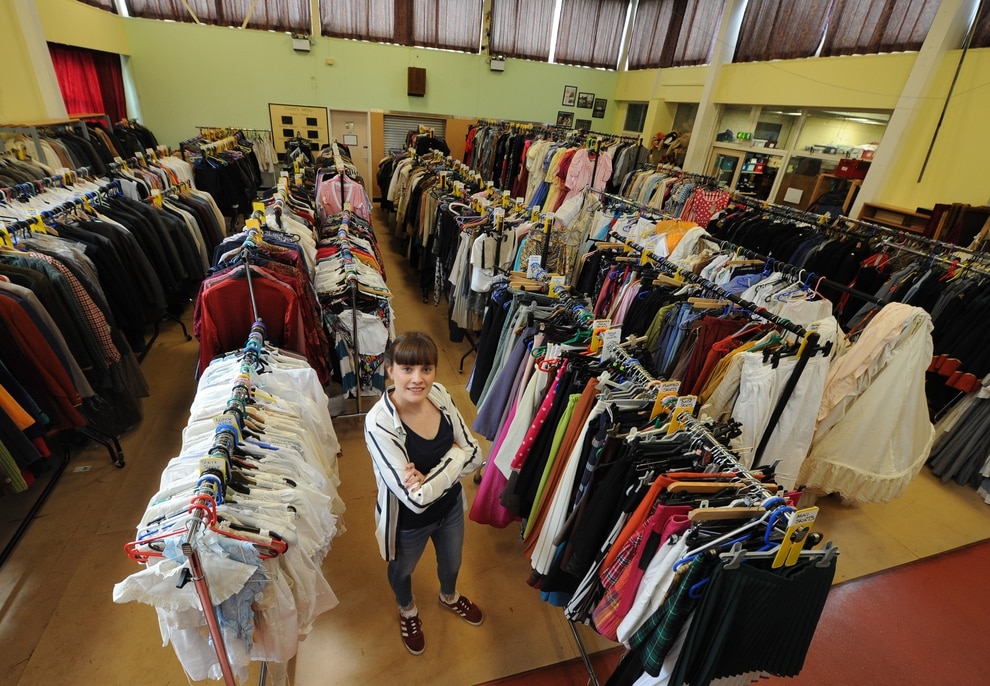 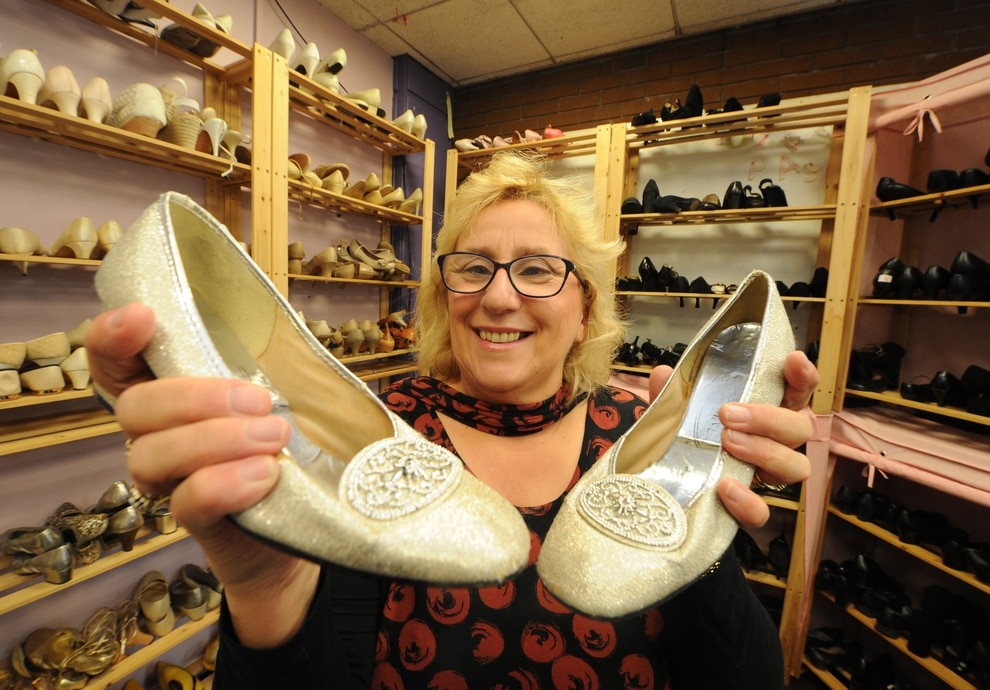 "Originally they said we would need to be out of here by July this year, but they have put that back for now," she says.

"But some time before the end of next year we are likely to have to come out of here."

It was a very different story three years ago, when CYT was handed a £384,000 Arts Council grant to create a permanent new home at the former Co-op building in Lichfield Street. The £500,000 scheme, part of a joint venture with Wolverhampton Grand Theatre and the YMCA. A fundraising campaign, backed by Inbetweeners star Greg Davies and stand up comedian Russell Howard, raised £55,000 towards the cost of the venture.

The group had been forced to look for alternative sources of funding since losing £25,000 worth of local government grants in 2013, and had built up a steady income from hiring out its costumes and props to other actors and drama groups.

"The plan was for us to take the ground floor, where we could have had a cafe and a shop front, so people would know we were there in the heart of the city," says Jane. But the group suffered heartbreak when the scheme collapsed later that year due to a change of plans for the building, and CYT was forced to return its Arts Council grant.

CYT co-director Holly Parry says the lack of a permanent home has left the group in dire straits.

"We're in Desperation Road," she says. "We have gone through the big dream of being in the Co-op with 10,000 sq ft, studio, workshop space, whereas now we will take what we can get.

"Realistically, we need somewhere with at least 7,500 sq ft space for our costumes, otherwise that will mean getting rid of everything and starting anew, which wouldn't be brilliant given that it would mean losing everything that has been built up over the past 35 years."

The Actor's Wardrobe, as the Stowheath centre is called, is like a thespian's department store. Thousands upon thousands of outfits ranging from medieval times to the present day. Row after row of shoes, hats, suits and dresses. Signs promoting the Women's Land Army from the First World War, armoury from the Viking conquests. For any situation from any era there seems to be a costume or prop, and that's not to mention the coffin and crocodile. The present base covers 4,500 sq ft, but it is packed to the rafters. If it were to be lost it would not just deprive CYT of its props department, but also the other drama groups which use its costumes.

Holly, who is 30, first joined the group through its summer school when she was nine years old.

"I went with my best friend Jess, we were always putting on shows in our living room, and I think my parents decided they had enough of being the audience," she jokes. She joined as a full member at the age of 13, and remembers playing the lead role in children's play James and the Giant Peach.

"I had to put on a boy's costume, but I loved it," she says. "I was really shy, but I loved reading scripts. I was terrified that everybody around me was so confident and they all seemed to know each other, but then I realised that the more I hung around these people, the more confident I became."

Holly says her experience also broadened her horizons and introduced her to people from different backgrounds, and gave her a pride in her home city which made her determined to return after graduating from drama school.

"I was from Whitmore Reans, and there were people from the Girls' High School who were really academic, and I wasn't like that at all," she says.

"It taught us how to all work together."

She also met her husband Tim through the group, who was the brother of funnyman Tom Parry. Tom, who is now the group's patron, joined CYT as a 14-year-old in 1995. He went on to write and star in BBC sitcom Badults, and is one third of the Pappy's comedy troupe.

“It changed my life,” he says. “I did a lot of travelling with the youth theatre and it was the first chance I got to go and experience other cultures. I’ve seen it change a lot of kids’ lives in Wolverhampton so it’s a very, very important organisation.

“It opens up a whole new world to you. Even if you’re not sure you are interested in performing it’s just meeting people and getting so much confidence in yourself. You also get so many opportunities to travel. That’s happened to me and it’s happened to a lot of people."

Routledge, who cut his teeth providing the lighting for CYT productions, is now one of Britain's leading lighting directors. As well as being responsible for the display in Danny Boyle's acclaimed opening and closing ceremonies at the 2012 London Olympics, he is also in charge of the lighting for the Spice Girls reunion tour, hit reality show X-Factor and pop superstar Beyonce.

Steven Abbiss has also gone on to enjoy a career in stage lighting after CYT, designing the stage lighting for top DJ Norman Cook, also known as Fatboy Slim.

Actress Celeste Dring, who has appeared in BBC drama Wanderlust and Channel 4 sitcom The Windsors, is another former member, as is Kev McCurdy who has become a fight choreographer for The Globe theatre and Royal Shakespeare Company, where he worked with Ralph Fiennes in Antony and Cleopatra.

Film set decorator Liz Griffiths, who has worked on movies including zombie comedy Shaun of the Dead and war drama Their Finest, was one of the founding members of CYT when she was 15.

“I will always be grateful to Central Youth Theatre for giving me such a good grounding," says Liz ,who grew up in Dudley and was a pupil at Royal Wolverhampton School.

"Although I tried acting, I was always more interested in what was happening back stage with stage management, lighting and sound.”

Jacob Harvey, now 19, has been a member of CYT since the age of nine, says the city would be much poorer if it were to lose CYT.

"I can honestly say that I don’t think anything in my life so far has shaped who I am today more than Central Youth Theatre," he says.

"It has been such a large part of most of my life the experiences I have had, the friends I have made, the skills I gained and the memories I have forged will stay with me for the rest of my life.

"I truly do not know what I would be without it. To lose CYT would be devastating not only for me but for the city. It would be denying the experiences and skills I have gained from it to the future young people of the city.

"CYT offers so much to the young people of Wolverhampton and the wider community. To lose CYT would be to lose one of the things that makes Wolverhampton great."

Holly adds that CYT also provides young people from difficult backgrounds with a constructive outlet for their energy.

"One of our members of staff, he's been with us for the past six years, has said he could easily have fallen in with the wrong crowd were it not for CYT," she says.

"It provides somewhere for young people to go that is not a school environment.

"A future for Wolverhampton without Central Youth Theatre would be rather bleak."

Hidden costs of lockdown are great: Help offered for those suffering from mental health during coronavirus pandemic