Did Black Country man photograph the ghost of Emanuela Orlandi?

Michael Jones was shocked by what he found on his holiday snaps.

A Black Country holidaymaker got a fright when he captured what he believes to be the ghost of a missing girl at the Sistine Chapel.

Michael Jones, aged 53, was on holiday with his wife in Rome earlier this month when the couple visited the Vatican City and he took the mystery picture.

Could it show the ghost of Emanuela Orlandi?

For €100, the couple took up the once in a life time opportunity to visit the 15th century chapel inside the Apostolic Palace - the official residence of the Pope.

Mr Jones, who works for forklift manufacturing firm Narrow Aisle Ltd in Tipton, decided to use his newly-bought tablet to take photos inside the historic building.

However looking back at the snaps, it wasn't Michelangelo's artwork or the ornate architecture that amazed Mr Jones - but the presence of a girl who he's sure wasn't there.

Mr Jones, who is originally from Wolverhampton but has since moved to Sedgley, couldn't believe his eyes when he saw the photo of what appears to be a young lifeless girl on the floor.

He said: "I was taking photos on my tablet and I haven't a clue how you work these things.

"It was really something inside so I was just taking photos of everything in there and for €100 I thought I'd get as many as I could.

"The floor had a beautiful marble design so I decided to take a picture of that.

"It wasn't until I got back to the hotel that I saw the image of the girl there – she was 100 per cent not there at the time of the photo.

"You can see a man's legs on the picture, he was there, just walking past at the time and if there was a girl there lying down like that in such a public place everyone would have been round her checking if she was okay.

"When I first saw it I was choked up, a tear came to my eye.

"People have said I paid a girl to lie down or something daft, I just let it go over my head."

Mr Jones admits seeing the picture did overshadow his holiday.

Upon arriving home he showed the image to his son and asked him to research any similar sightings online.

After some online digging, they believe the 'ghost' could be Emanuela Orlandi who went missing in 1983 and whose case remains unsolved today, with various reports suggesting she was murdered at the Vatican.

Emanuela is believed to have been kidnapped after a music lesson in Rome on June 22, 1983 when she was 15 years old.

Mr Jones says he wasn't aware of Emanuela Orlandi prior to his Rome visit and he has no technological know-how to create such an image.

Mr Jones, also claims to have seen the shadow of what he believes to be a ghost in the past and admitted he does already believe in paranormal activities.

He added: "It wasn't until I got home and told my son, Nathan, about it that I found out about this Emanuela and he had a Google and found that story.

"I don't know if it is her, but I think this has been shown to me for a reason – I haven't been sleeping properly since it happened.

"A few the guys at work have been putting Ghostbuster sticker's on my stuff at work, but I know this is genuine." 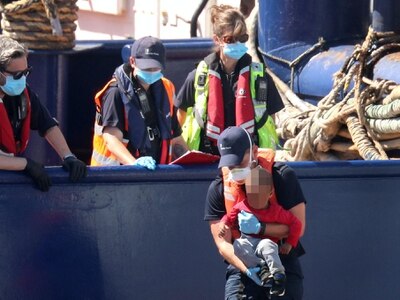