Around 10,000 people turned out for the fourth Wolverhampton Bonfire Night on Friday. 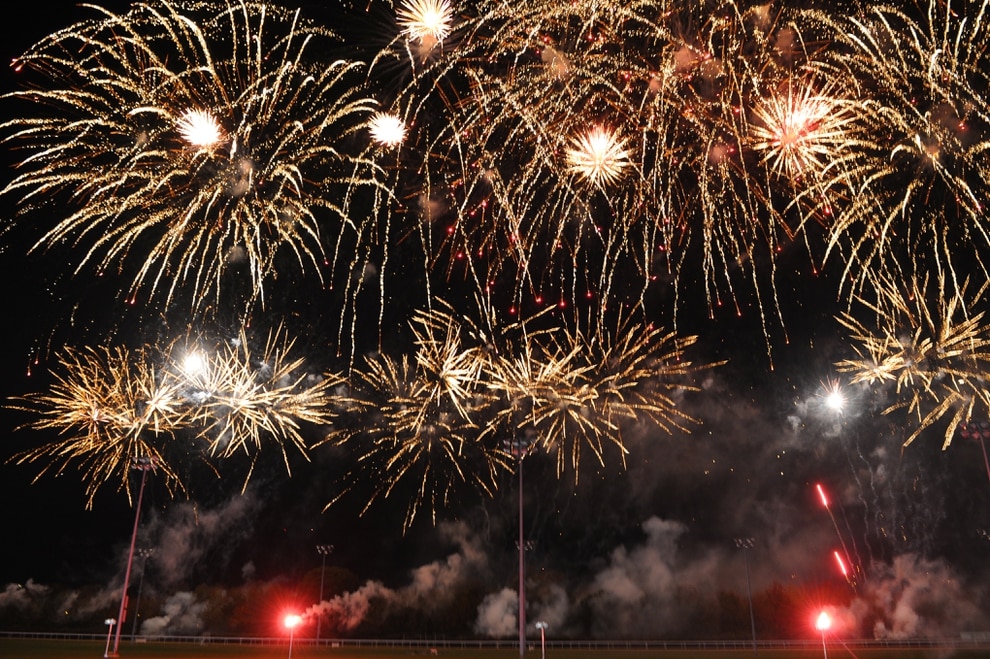 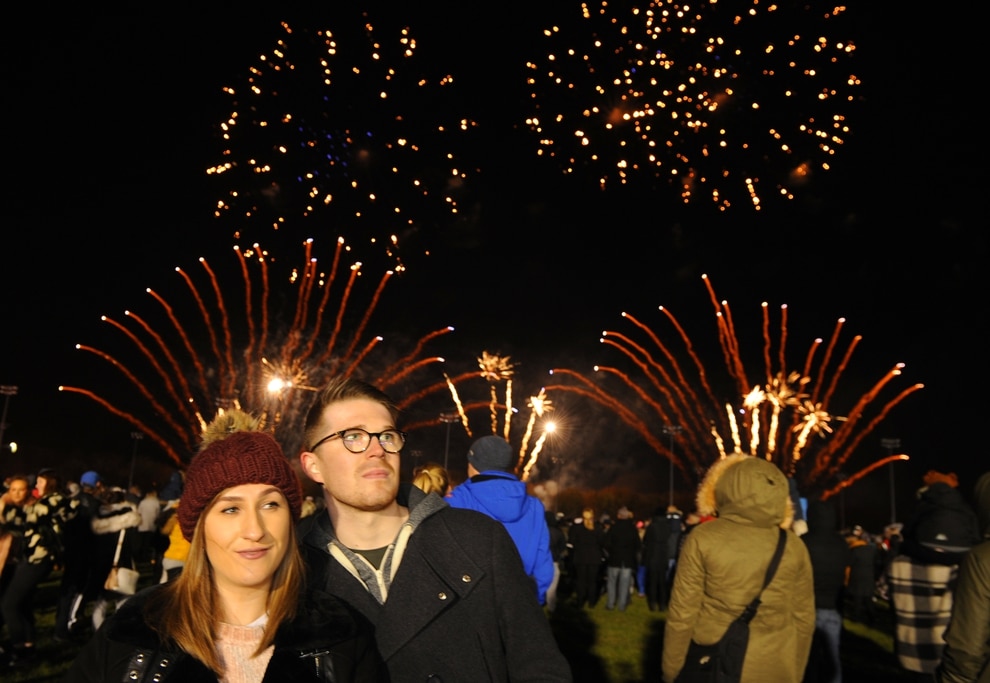 Becky Meeking and Justin Gilbert from Bilston enjoy the fireworks 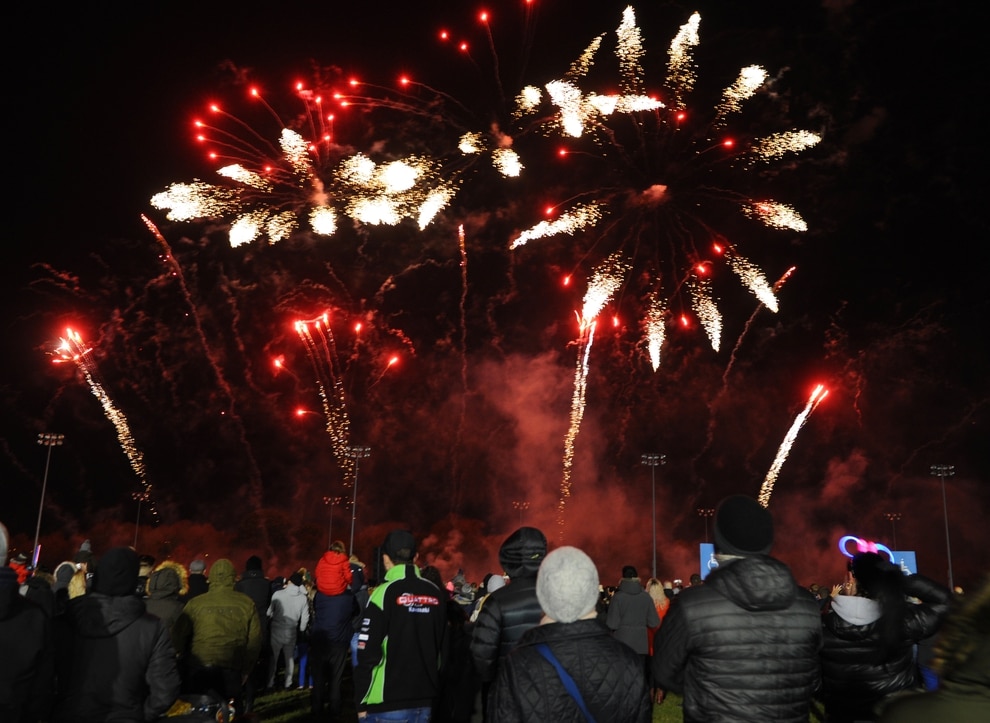 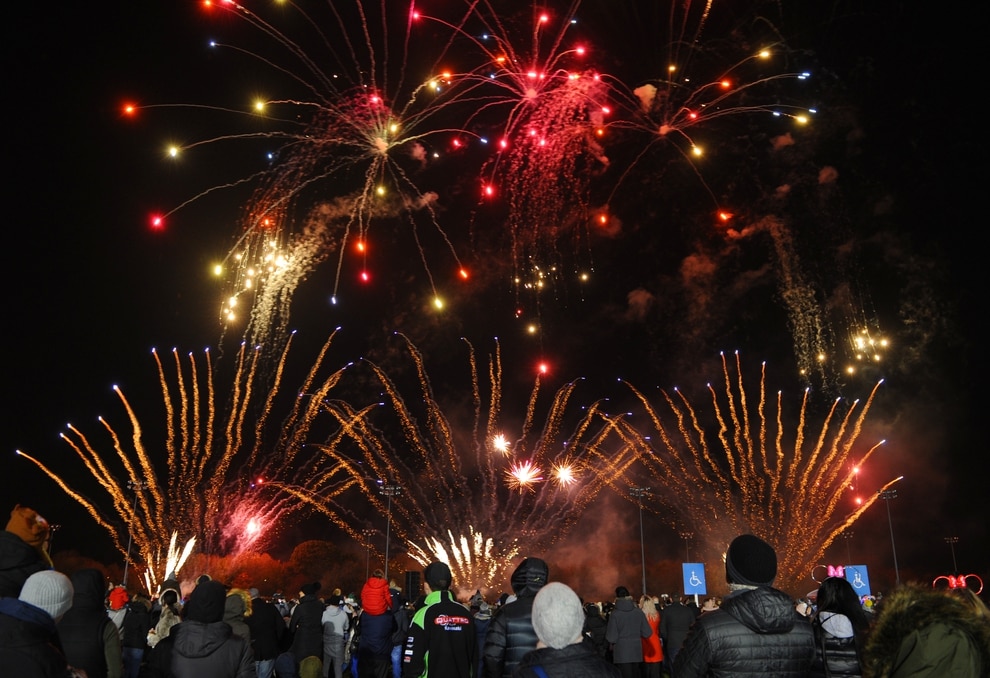 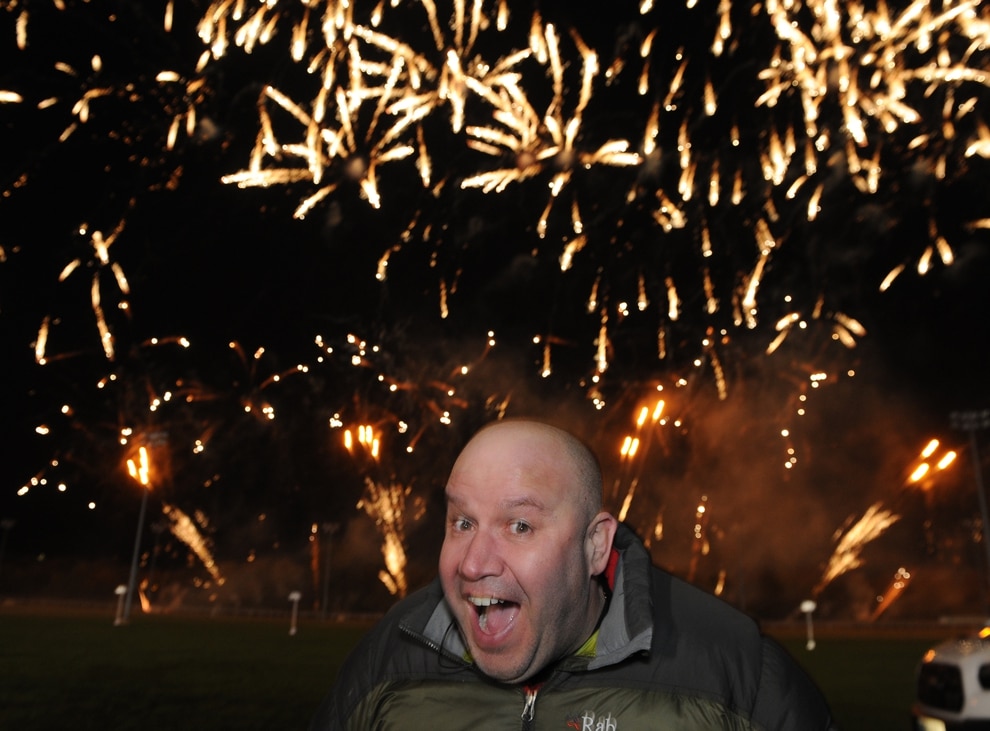 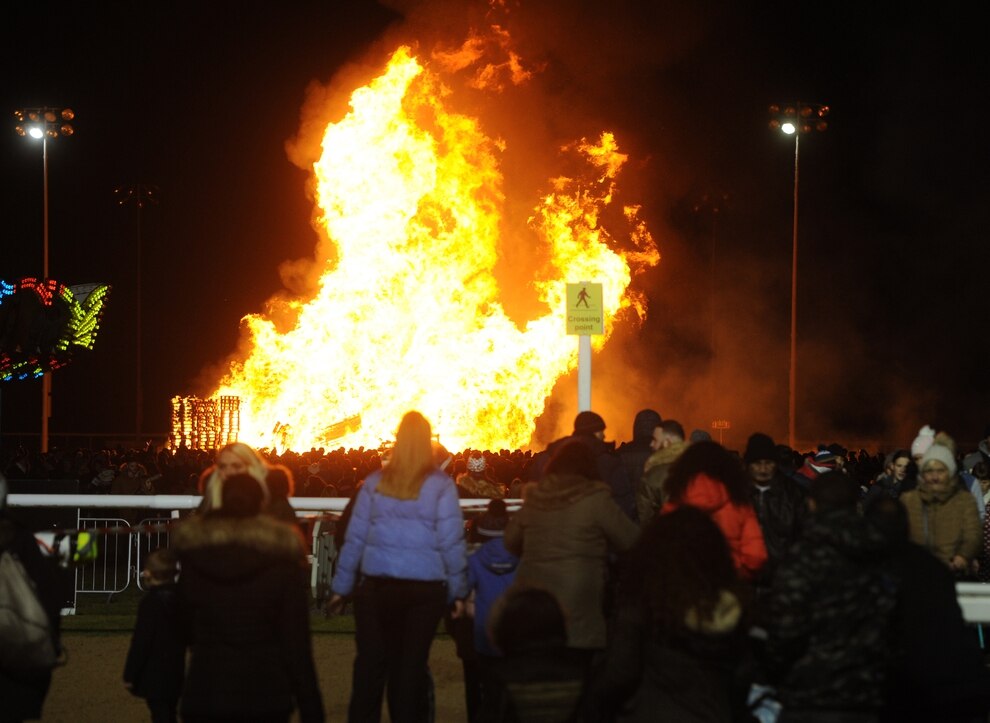 The bonfire was lit by Wolverhampton Mayor Phil Page 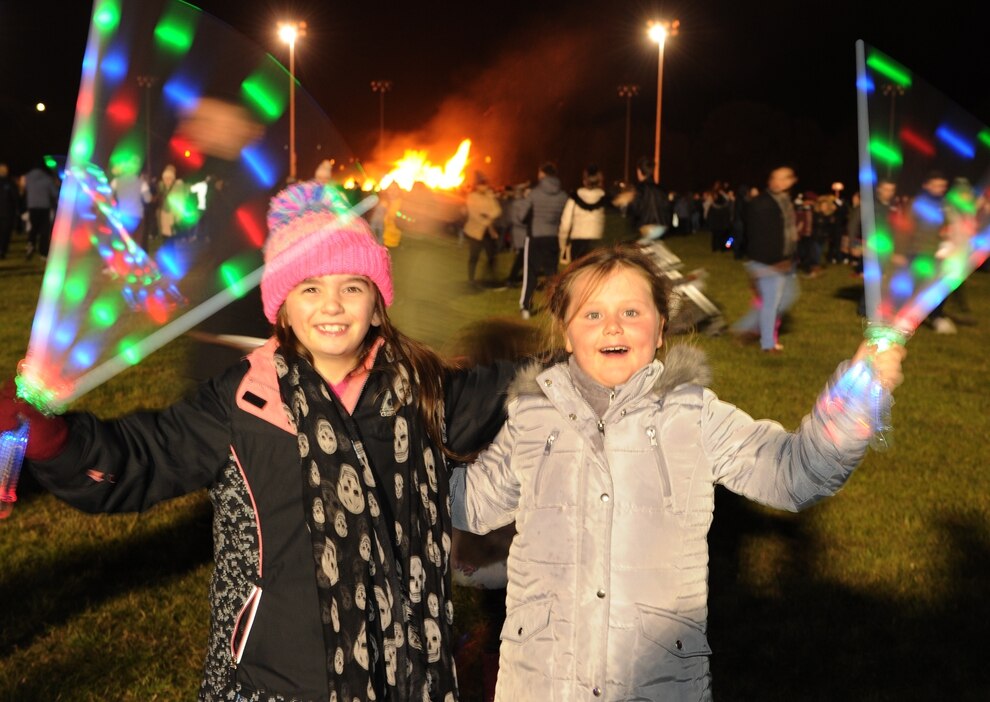 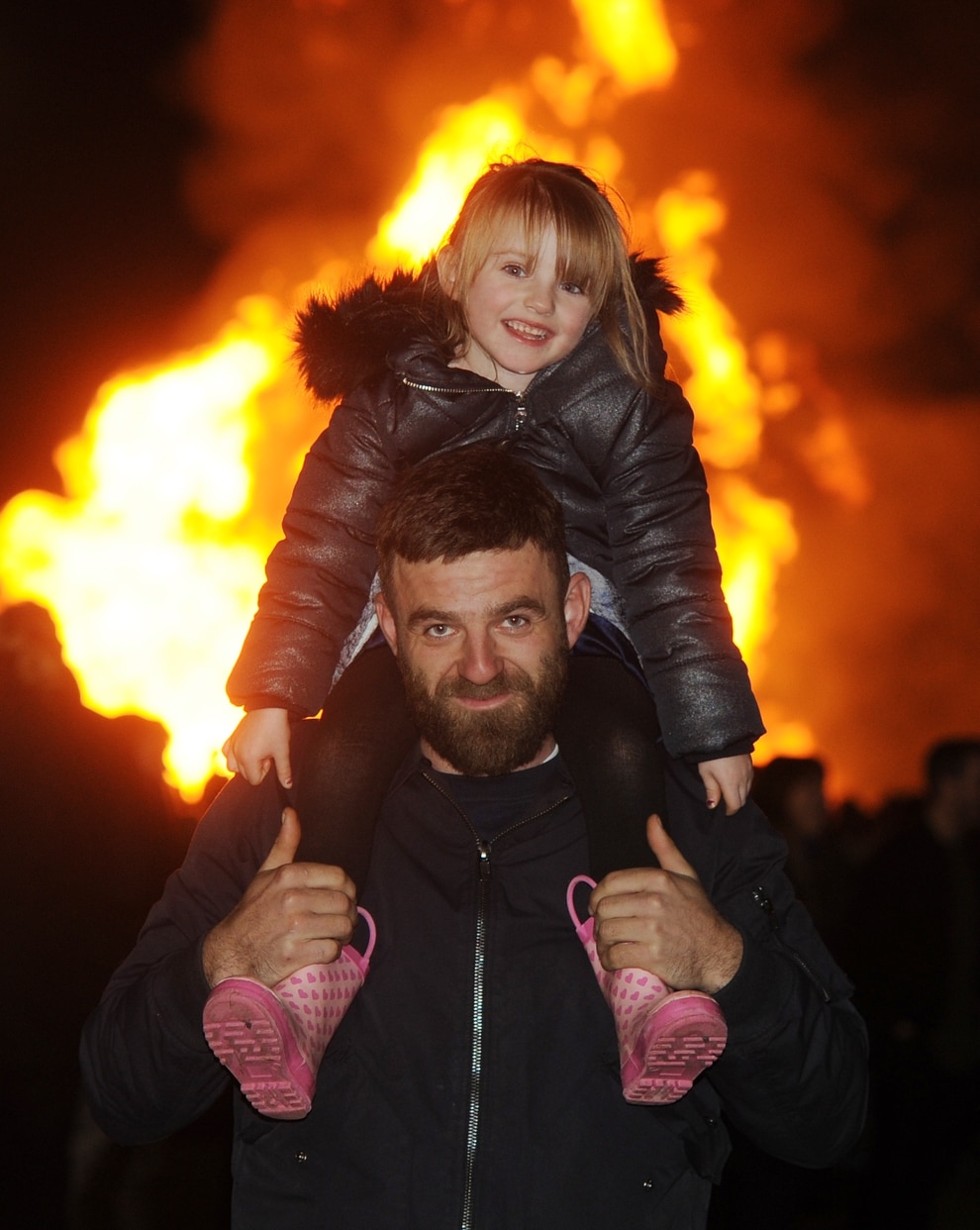 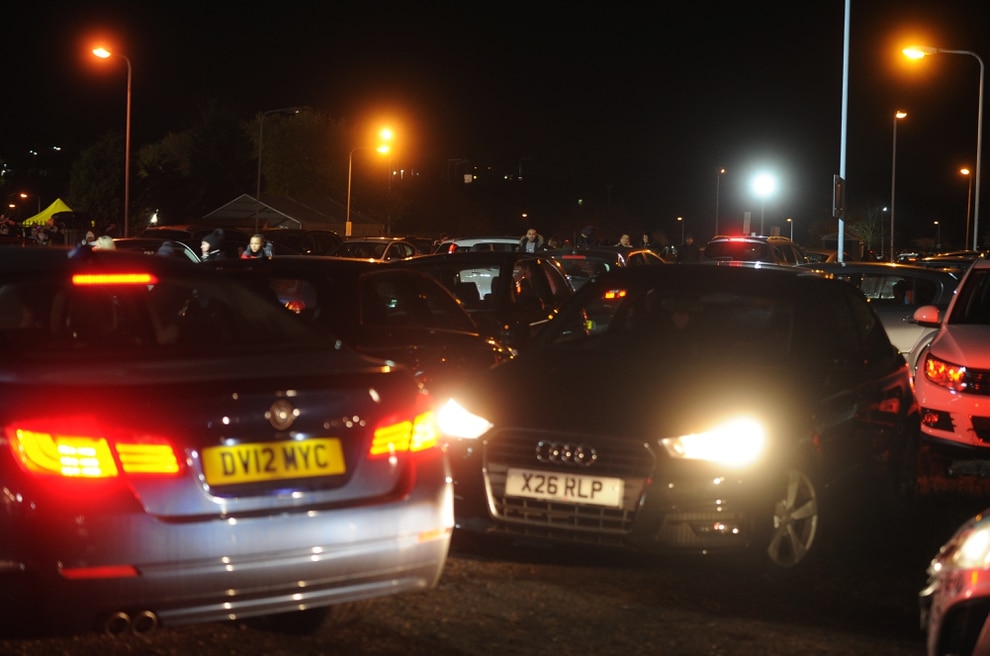 Cars queue to leave the racecourse after the firework display

The event was hosted by Wolverhampton Council and Signal 107 and moved from Saturday to Friday to prevent a clash with Wolves' unusual Saturday night fixture against Tottenham Hotspur.

After a two-minute silence in memory of those who fought in the First World War, Wolverhampton Mayor Phil Page lit the bonfire at 7.30pm before the 25-minute firework extravaganza started around an hour later.

WATCH footage of the fireworks:

Meanwhile a competition was held to see who could perform the best floss dance.

And although the traffic was inevitably heavy around Dunstall Park and there were long queues to leave, most firework fans were impressed by the organisation inside the racecourse.

Paul Trego from Wednesfield was among the crowds with his wife Tracie and three children.

"We watched the bonfire be lit and we've been on a ride and the kids absolutely loved it, which is something," he said.

"The prices are pretty reasonable for an event like this. You couldn't get a box of decent fireworks for that and put them up in your garden."

Gursh Grewal, from Wednesbury, visited the racecourse with his partner and said he would '100 per cent' visit again.

He said: "Traffic was a bit bad, but it's for this event so we expected it.

"It's my first time here and I would 100 per cent come again – despite the cold.

"It's been fantastic. We've really enjoyed ourselves tonight."

Dean Flavell travelled from Sedgley with his two daughters, Kayleigh, 10, and Shannon, 15.

He said: "We come here every year for the bonfire, even when it was held at West Park – we've followed it here, really.

"I found it a lot easier than the Saturday run.

"It's been brilliant – a little cold but good. It's always a good atmosphere here, too.

"There's a show like this in Himley, but we always choose Wolverhampton even though they're about the same distance apart.

"I think it's one of the best shows you will see outside of our capital city," he said.

"There was almost 25 minutes – and that's the main show – of some extraordinary fireworks.

"I think we got the music right and I think we had an excellent show."

Regarding the switch to a Friday night, Mr Roberts added: "It's the right decision for the city. Yes, it will have had an effect on the numbers but it would've affected our numbers if we had it on against the football.

"It would've been chaotic for the city just to carry on, so we considered various options with the people that we work with – the council and the operators that help us put the show together – and falling forward to the Friday was the best solution that we had.

"What I like most about this event is that it's almost entirely families because they feel safe here. It's a very safe venue once you're inside and there's plenty of room – you don't feel claustrophobic."