When our daughter arrived on this Earth, the small print said she’d be into dinosaurs. 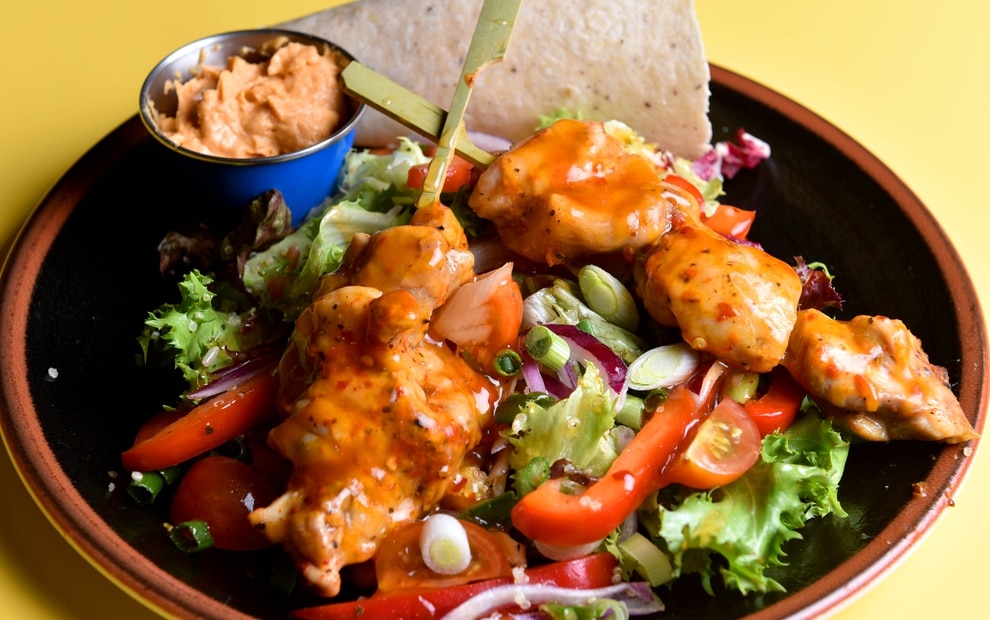 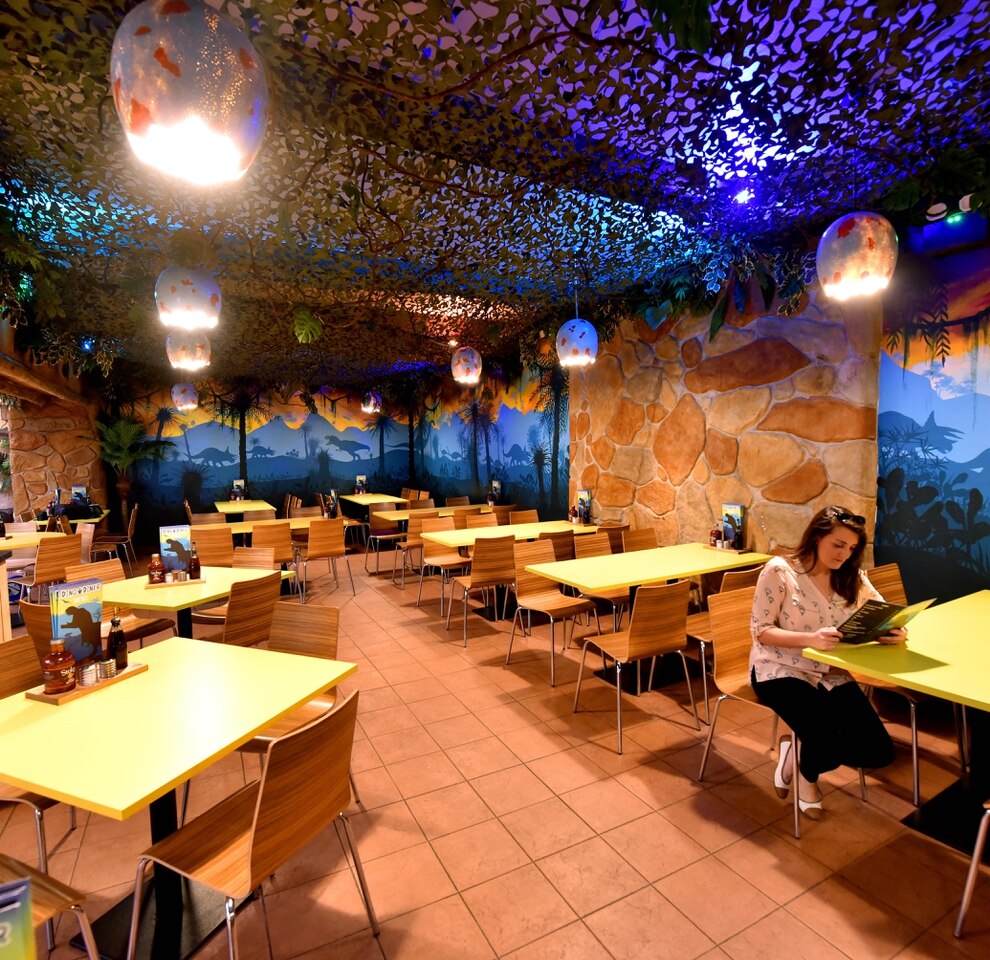 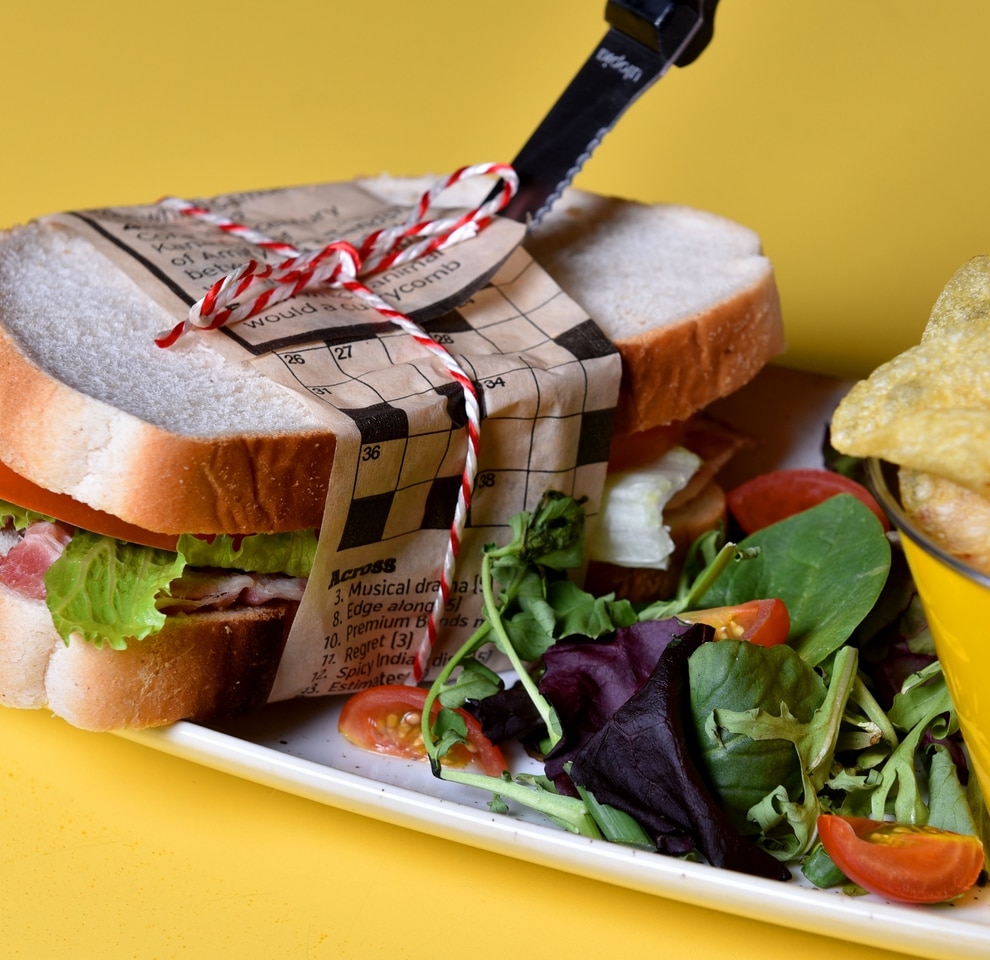 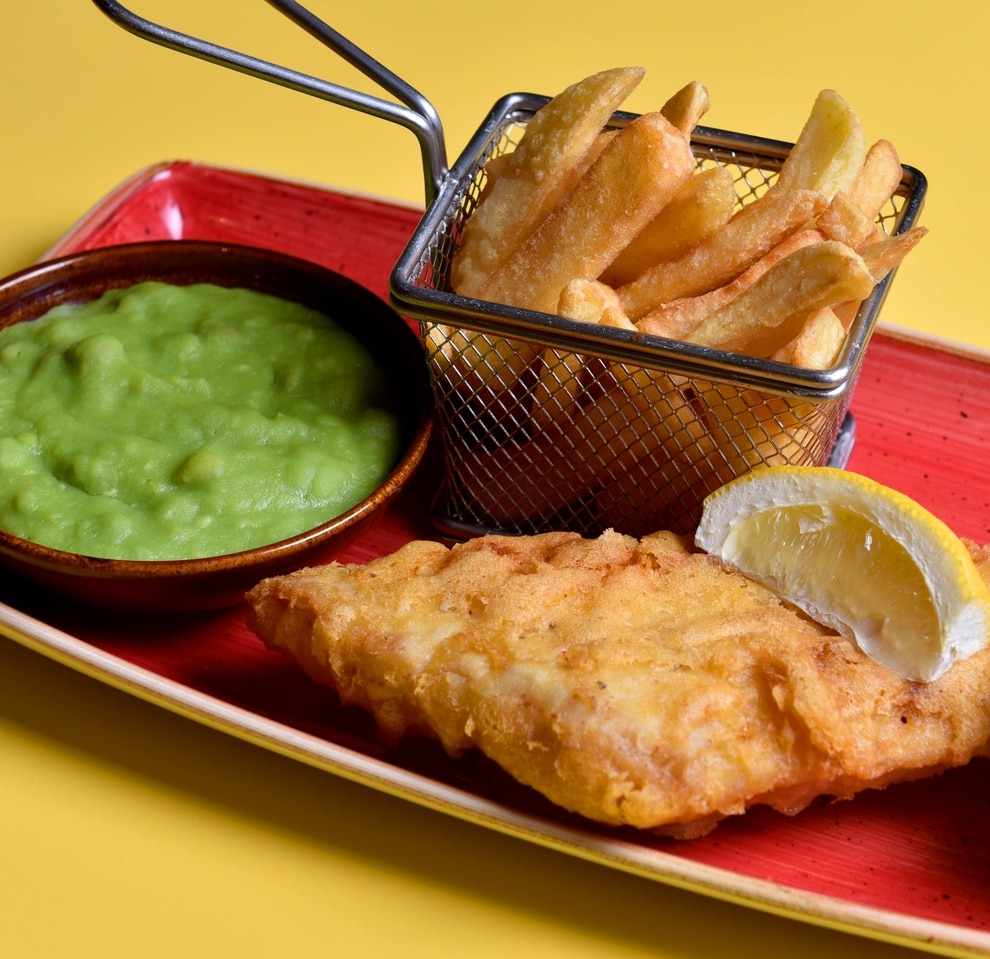 Catch me if you can – the fish and chips with peas 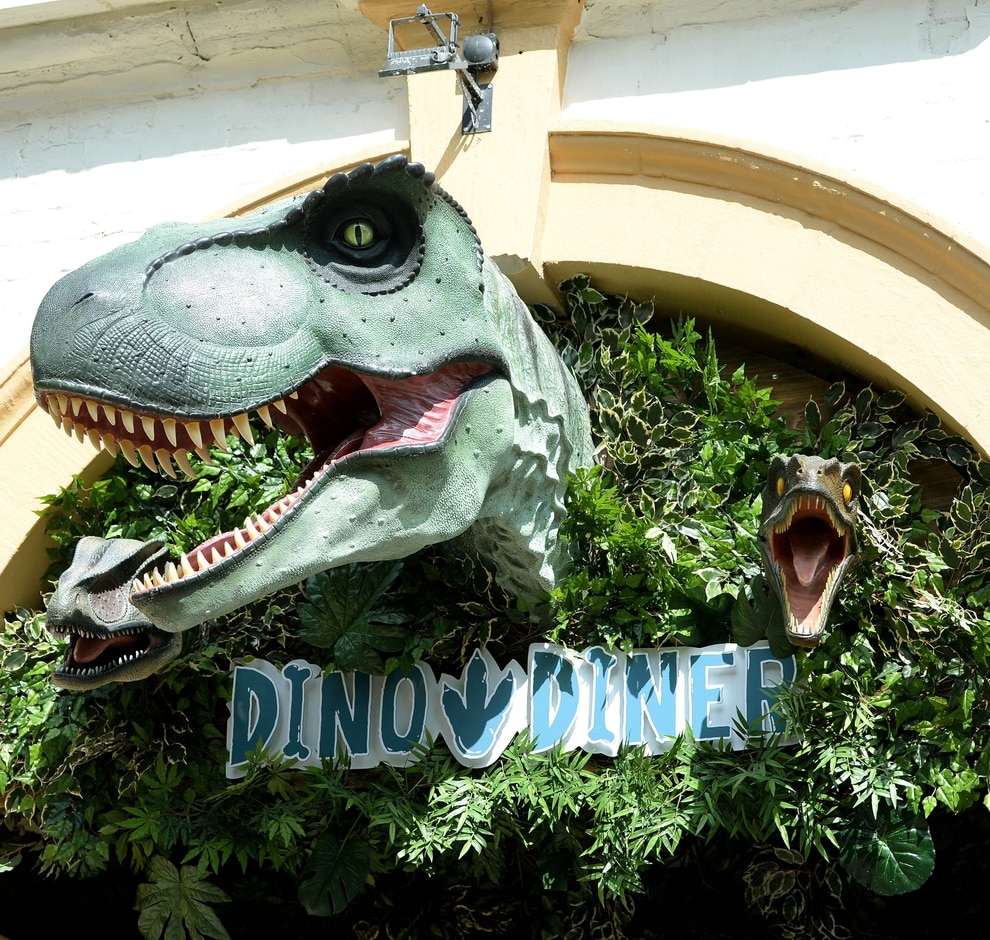 Roarsome – the entrance to Dino Diner 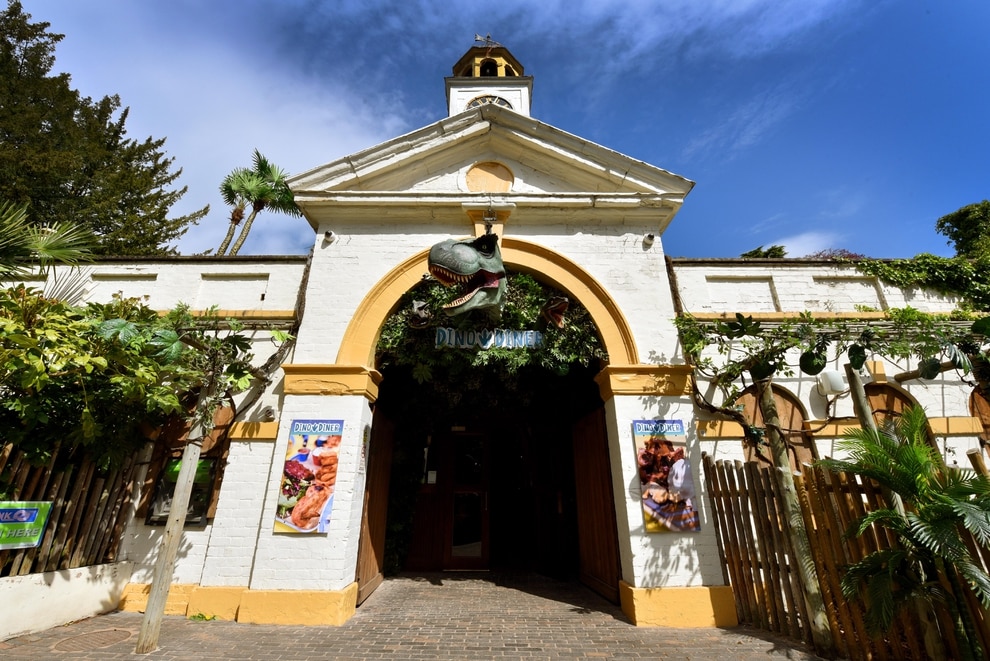 That’s what we were lead to believe when she was handed to us at the hospital, swaddled in at least a hundred towels, her little face peering up at us expectantly.

Cradling our little girl, my other half hummed the theme tune to Jurassic Park into her ear, in the hope that his lifelong love affair with the Steven Spielberg blockbuster would be passed down to her subconsciously.

However, 15 months on, an interest in prehistoric beasts was yet to be ignited in little Edie. And her disinterest in anything dino was never more evident as we walked around West Midland Safari Park’s excellent Land of the Living Dinosaurs.

Despite being whisked back several million years through the spectacle of animatronics – the closest to Jurassic Park we could possibly get on these shores – the only thing exciting Edie was a duck that had wandered in from another enclosure. The kid loves a duck. Roaring T-Rex? Yawn. Raptor with razor-sharp retractable claws? Booooring! Swooping pterodactyl? That’s, like, so old! Mallard on the loose? Frenzied excitement. Quack, quack!

And so, in a last ditch attempt to spark some prehistoric magic, we headed over to the Dino Diner for some lunch because if anything’s going to inspire our kid, it’s food; that’s one common denomintor she does share with her parents.

The diner is a new addition at the safari park, having only opened last month. Rather excitingly – for me and my other half at least – it stirred memories of the dining room scene in Jurassic Park, in which Tim and Lex eat jelly before being disturbed by a pack of hungry raptors.

Enter through a giant bone carcass, it has a prehistoric cave-like interior with moody lighting and tropical plants. The only thing missing was the Jurassic Park soundtrack. Or even some T-Rex. Get It On, I say.

Welcomed by a sunny member of staff in safari-style gear, we were shown a table and invited to order food and drinks at the counter.

After a bit of a false start due to a fire alarm going off and the restaurant being evacuated, we reconvened to decide on our food choices.

The menu makes an amusing read. Carnivores are well-catered for; there’s Rex’s Lunch – a lamb shank in red wine sauce with mashed potatoes – or a Predator Platter comprising half a chicken, rack of ribs and sides.

Meanwhile, herbivores can tuck into the Bronto Balti – a vegan sweet potato balti, while skinniovres (dieters) can opt for the Raptor Salad of piri piri chicken, mixed leaves, sweet potato and quinoa.

Litte people have loads of choice too – there’s not a Bernard Matthews breaded turkey dinosaur in sight, with options including sausage, mash and peas, and pasta bolognese.

There’s please-all side orders too, such as onion rings, cheesy dough balls and coleslaw.

In the interest of giving the menu a fair run we ordered a raft of food including the barbecue pulled pork-loaded nachos, the raptor salad and volcanic skillet fajita. Oh, and a diddy dino sweet potato balti with rice for the little one on the basis that we fancied trying it too, which is generally our rule of thumb.

Drinks are refillable so we ordered two of those and a bottle of water.

Our meals arrived promptly and looked appealing – particularly in the perpetually-disappointing field of ‘theme park food’, which is notorious for being deep fried and vastly overpriced.

This food, on the other hand, featured greenery and looked freshly-cooked.

It was however, a touch overpriced – but not cripplingly so. Most disappointing in terms of value for money was the kid’s sweet potato balti which, at £6, came in a meagre portion of brownish mush on top of plain white rice. Our daughter was about as interested in it as she was the dinosaur trail.

She was rather enamoured by the barbecue pulled pork-topped nachos. This dish proved a hit with all of us; we attacked it like a pack of predatory pterodactyl at a buffalo meat buffet. I particularly liked the home-fried nachos, which were more flavoursome and fresh than the bagged corn chips. It came topped with melted cheese with little pots of sour cream and greying, ready-made guacamole. It’d have been good to see fresh, vibrant green guacamole but the alternative was passable.

The same shop-bought stuff came as an accompaniment to the fajitas. However, it was well presented with a separate skillet of sizzling chicken breast, mixed peppers and onions in a sauce as spiky as a stegosaurus’s spine, and a pile of soft tortilla wraps. At £8 it was comparable to a dish you might find on the menu a similar Mexican chain.

The raptor salad provided some much-needed crunch and it was refreshing to see it packed with a few unusual ingredients such as sugar snap peas and slices of sweet red pepper. Two skewers of chicken thigh meat drizzled in a sweet chilli sauce were moist and pleasantly charred and the accompanying red pepper hummus and tortilla wrap were fine. We polished off most of the food despite ordering far too much for no other reason than it was pretty delicious.

There was no room for dessert, despite tempting offers such as Teramisu (unsurprisingly a play on an Italian tiramisu). We decided to leave space for ice cream after we’d tackled the amusement arcade.

Our bill came to just over £36 which isn’t bad considering it was ‘theme park food’.

And while our little girl was unimpressed with the 65- million-year-old dinosaurs (she’s only one, there’s still time) the food was a roaring success.

So now back to those ducks. Quack, quack.

What it's like to be a father of triplets

Severe storms to continue after causing disruption to swathes of UK

TikTok ban in US to be challenged