Profit is a filthy word to Russell Brand. Filthier and more distasteful than the stream of F-words he comes out with during a nearly two-hour set writes Daniel Wainwright

He believes in heavy taxation of corporations and that communism is 'basically sharing'. Hmmm.

This happens to be the same Russell Brand who, hours before appearing at Wolverhampton Civic Hall last night, posted a message on Twitter urging everyone to buy his new DVD from Amazon.

The same Amazon that doesn't pay all the tax it could, that makes an enormous profit.

Maybe he should have urged more fans to buy tickets as the Civic was surprisingly still tweeting availability a couple of hours before the show.

Brand's tour is called Messiah Complex. He takes us through a list of his various heroes – Gandhi, Malcolm X, Che Guevara and Jesus and explains how he's just like them.

This is comedy, of course. He knows full well he's nothing like any of these inspiring people and that he's just a funny man with a beard who likes to have sex a lot. That's the joke.

He's fully aware of the potential accusations of hypocrisy when he talks about how we, as a society, now worship at the altar of celebrity.

"I'm not complaining about how I was picked out of a life of poverty and addiction and dropped into a tumble drier of sex and money," he says.

Not sure that life at the renowned Italia Conti Academy actually qualifies as 'poverty' around these parts but presumably it's all part of the act.

And he knows that there are plenty of holes to pick in the various heroes he has chosen.

Che Guevara, the idol of the Cuban revolution, was a bit of a homophobe – something Brand certainly disapproves of.

But he had a cool beard and hat and looked great so that makes it all fine. Brand's more bothered about how Guevara's image was used to flog Mercedes cars.

That'll be the same evil Mercedes company who Brand takes delight in telling the audience made cars for the Nazis.

And the same Mercedes who made the luxury S-Class that he slipped into for his exit after last night's show. Hmmm. Again.

He hates big business, does Russell. He goes on about how Ghandi's image was used by Apple, even though he'd probably have strongly disapproved of the conditions in its Chinese factories.

I wonder if Russell knows exactly where the mugs bearing his image at £6 a pop in the foyer were made.

I really, really hope it was the Staffordshire Potteries and not some sweat shop on the other side of the world.

Perhaps I'm being a bit harsh, though. He is, let's face it, an entertainer. His crowd was in stitches at his suggestions of the sort of things a teenage boy can get up to with a vacuum cleaner and the (potentially disturbing) suggestions that he's sexually attracted to his cat.

He thrives on being the centre of attention.

He's the court jester. And yet recently, he's been held up as some great political thinker of our time.

He shocked Jeremy Paxman when he said he didn't vote, only for Paxman to then virtually take his side.

But I doubt very much he wants to change anything, being a multi-millionaire and everything.

When David Cameron's face flashed up on the screen and Brand made various crude references to his sex life, it wouldn't have mattered if it were Blair, Brown or Ed Miliband up there.

Brand will be the eternal opponent to 'the system'. The faces will change but governments will always attract our scorn.

He won't play along with the rules because it distracts attention from himself. Even when he has something important to say, with his incredible vocabulary, his ego gets in the way.

He talked at one point last night about how he'd gone to Parliament to argue the case that drug addiction should be treated as an illness rather than a crime.

As a recovering junkie himself it would have been a powerful argument that would have challenged the stereotypes and perceptions of the political classes. But attention ended up focused on how he'd dressed – in a long coat, a vest and a cowboy hat.

That's what we remember, not the message he had for the politicians.

But he doesn't mind – because it got him a few laughs last night showing the slides.

At the start of the show he went out into the crowd and got felt up by a grandmother.

Then he climbed a wall up to the balcony and got cuddled by a fan.

He likes his cuddles. I think he truly believes the world would be a nicer place if everyone cuddled and had more sex and shared what they had.

And it would. I'd love a world of sex and cuddles. I'd also love a share of Russell's huge multi-million pound fortune and his luxury home. Or should that be homes.

The absurdity of all this is not that Russell Brand is a hypocrite.

He's hilariously funny, if you like this sort of thing. Although, I have to be honest, I didn't laugh once.

He's the kid that disturbs the class because there's a dog in the playground or who climbs onto a police van and drops his trousers.

At the end of the show, the crowds surged forward to try to touch him or get an autograph. He stayed on stage for at least five minutes to oblige.

If he stood for election, he'd probably win a seat as an independent.

But he doesn't want to lead us.

He's a comedian. He wants to entertain. And he does it brilliantly. 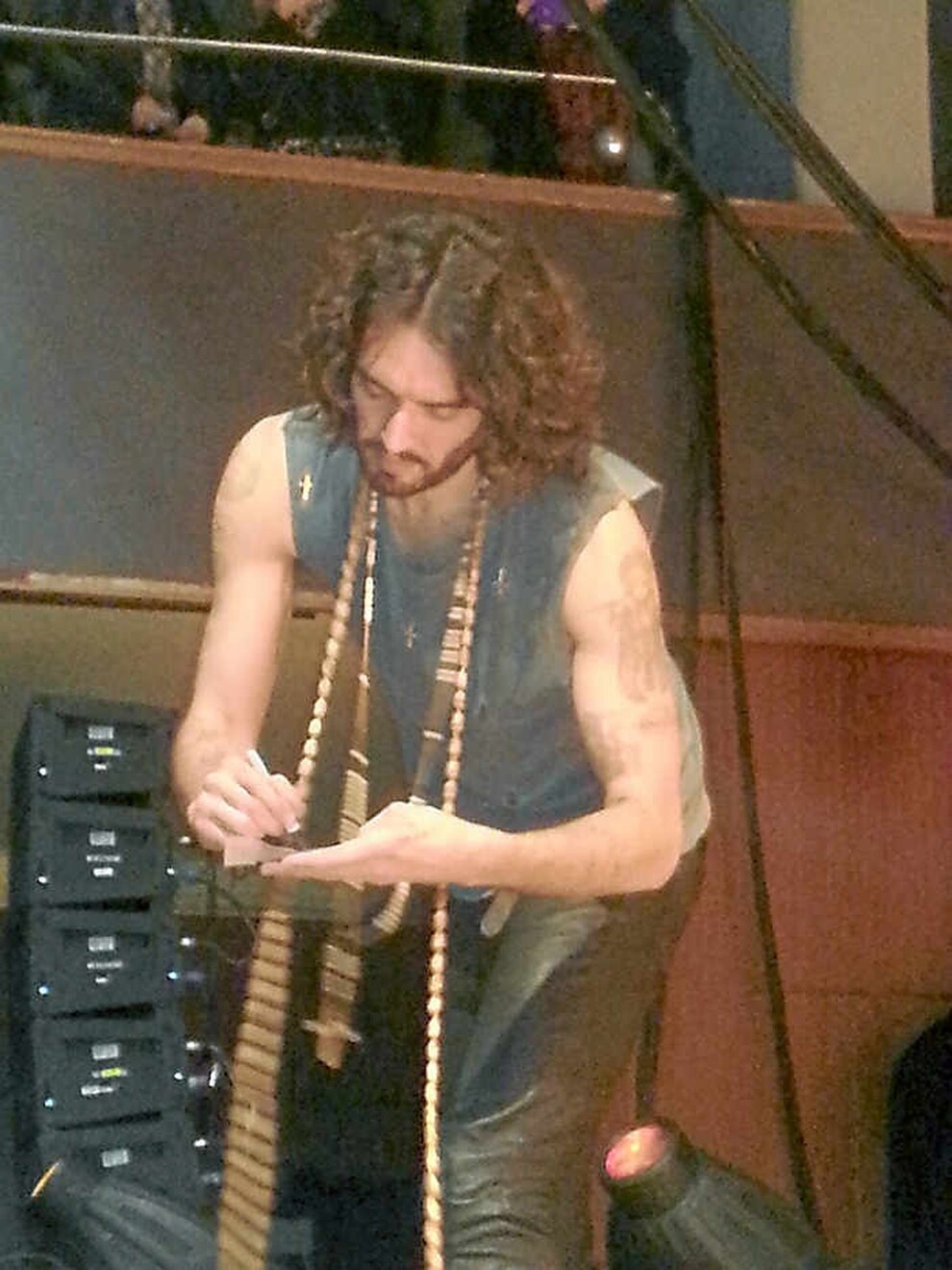 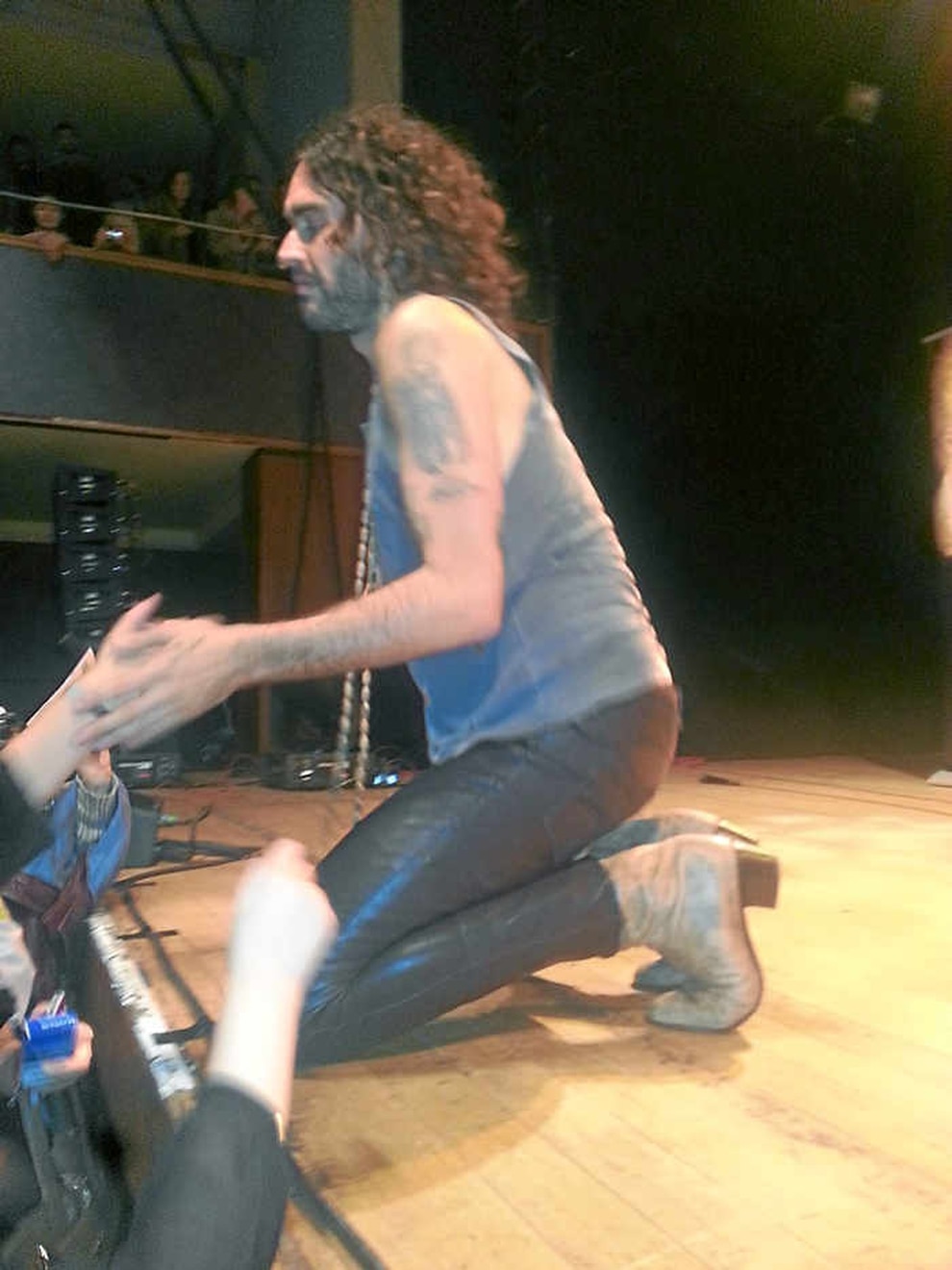 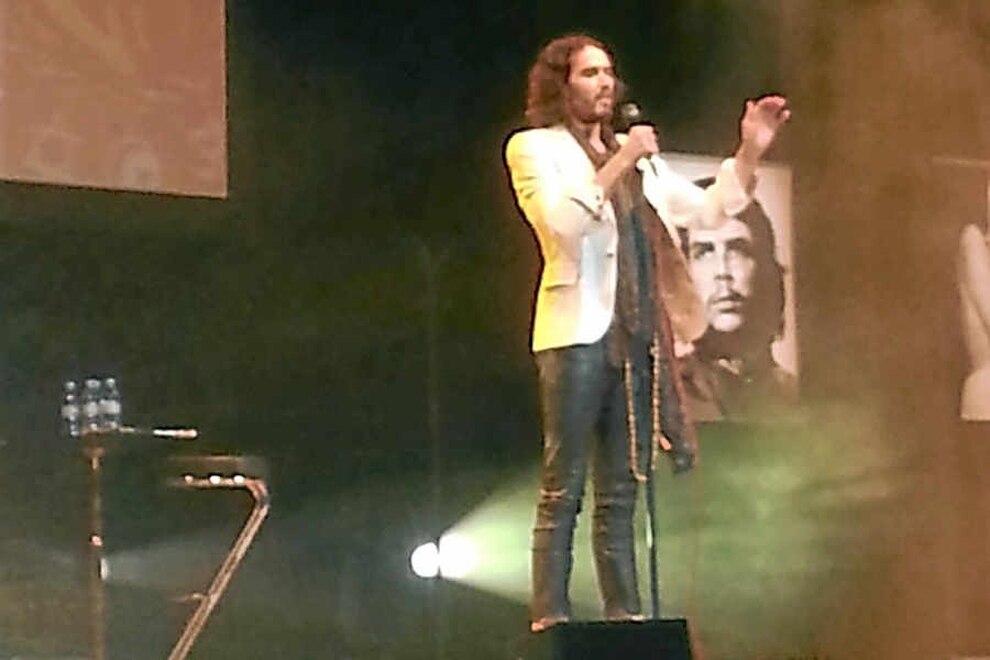 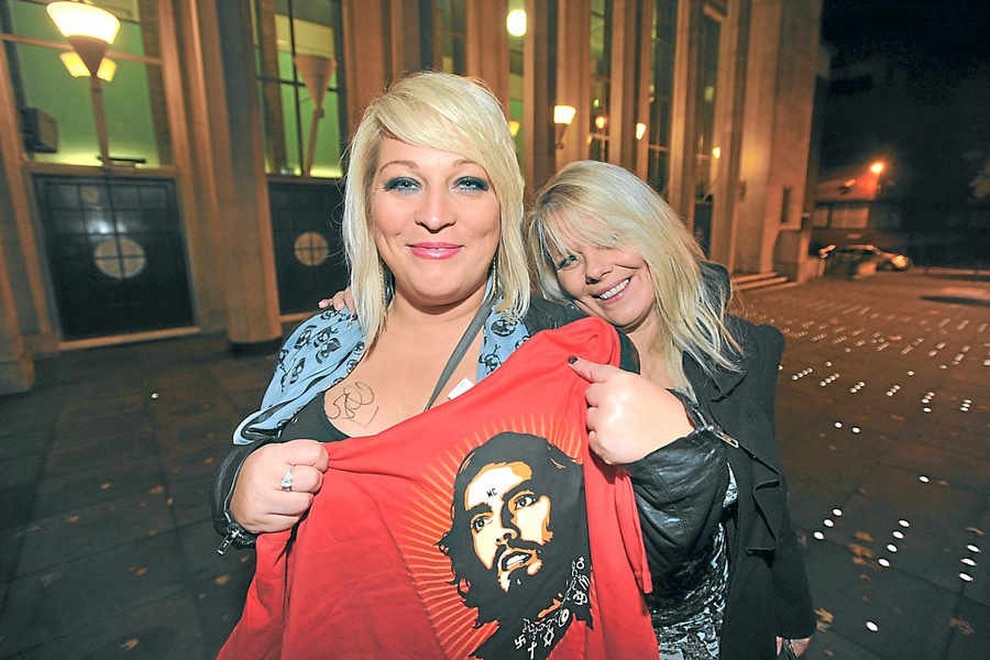 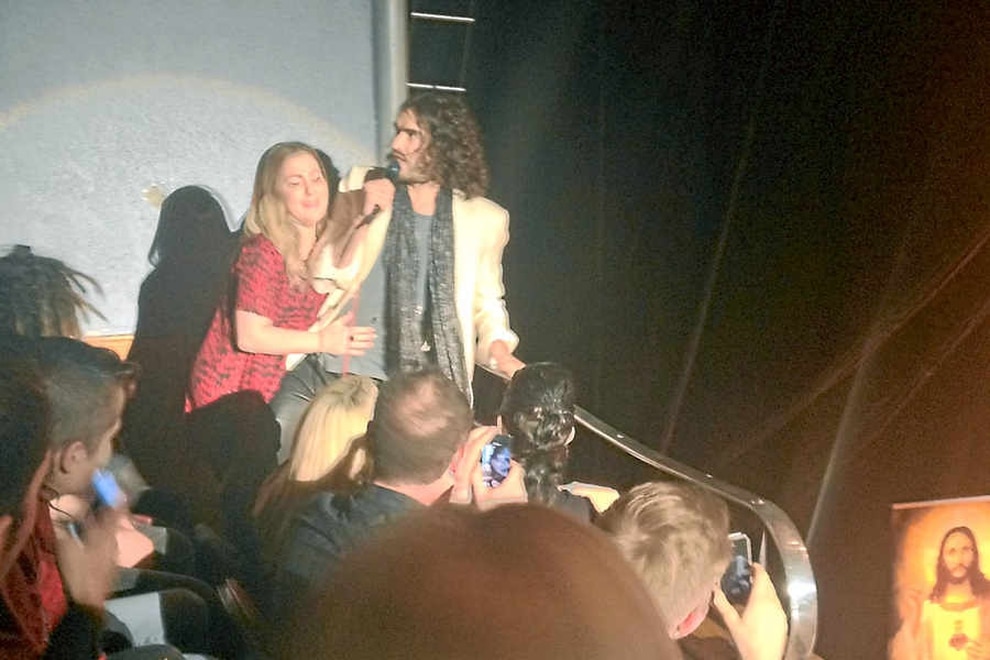 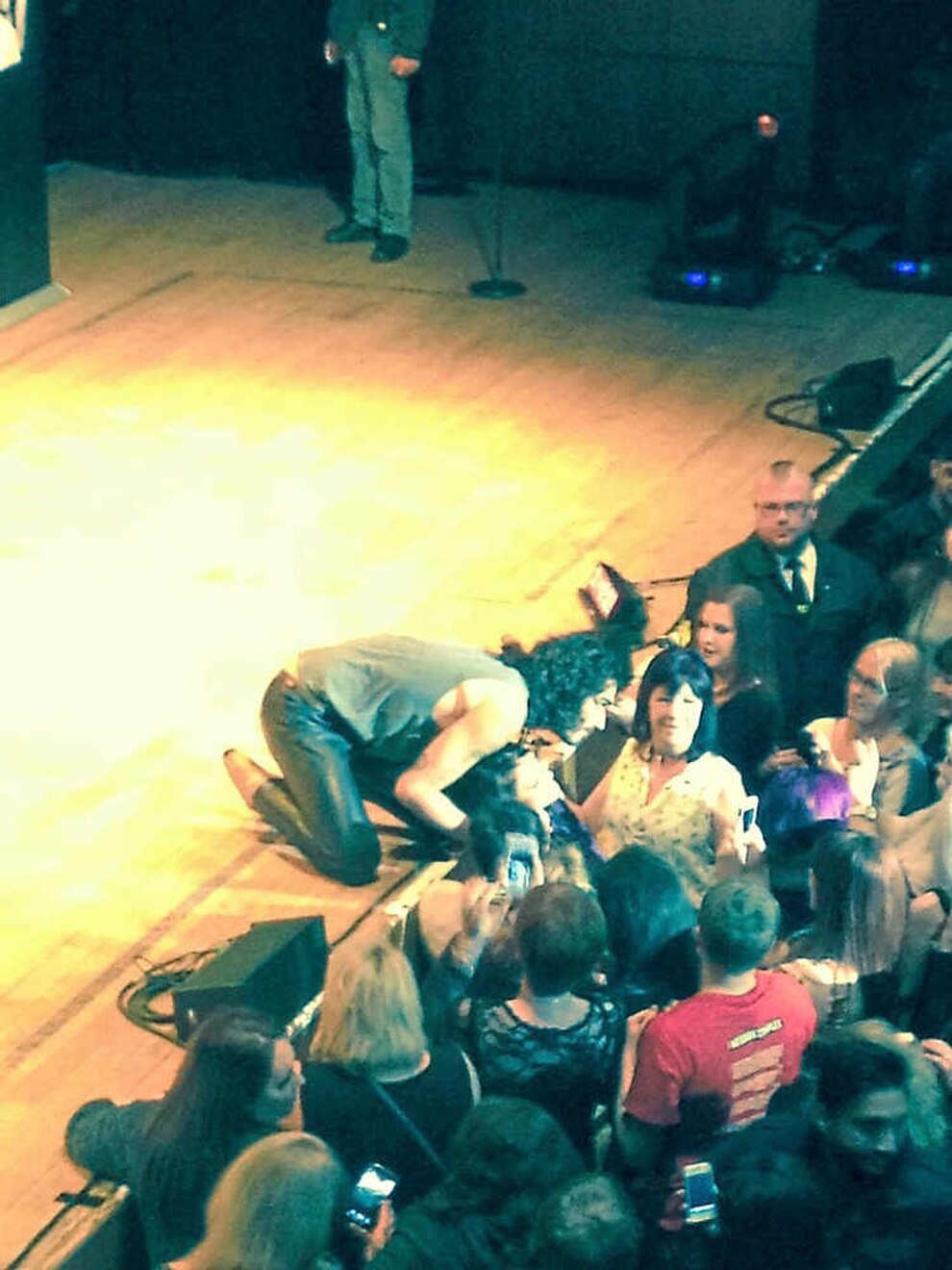 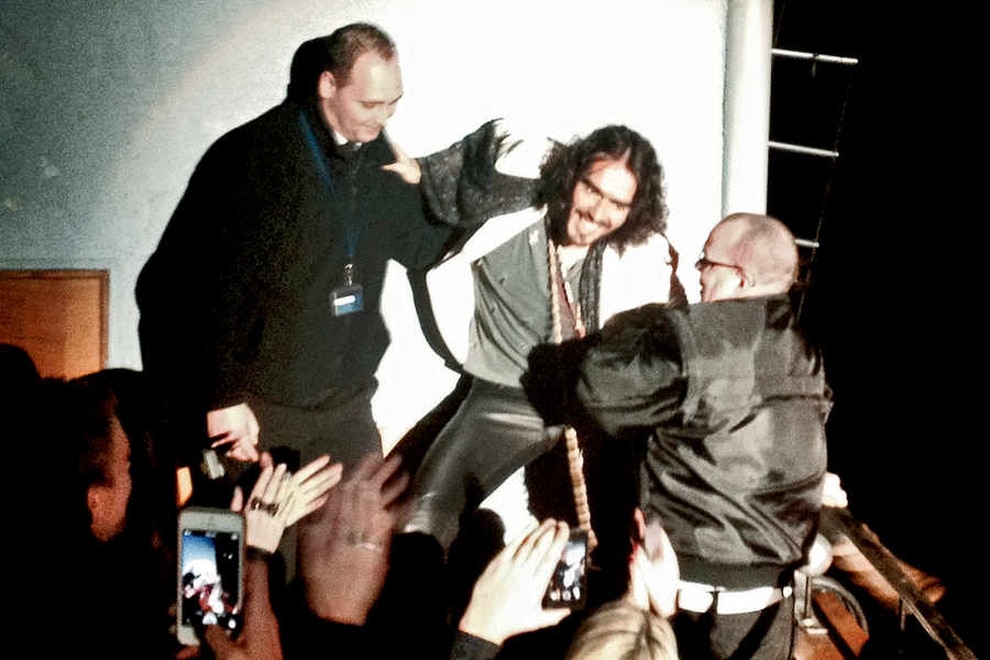 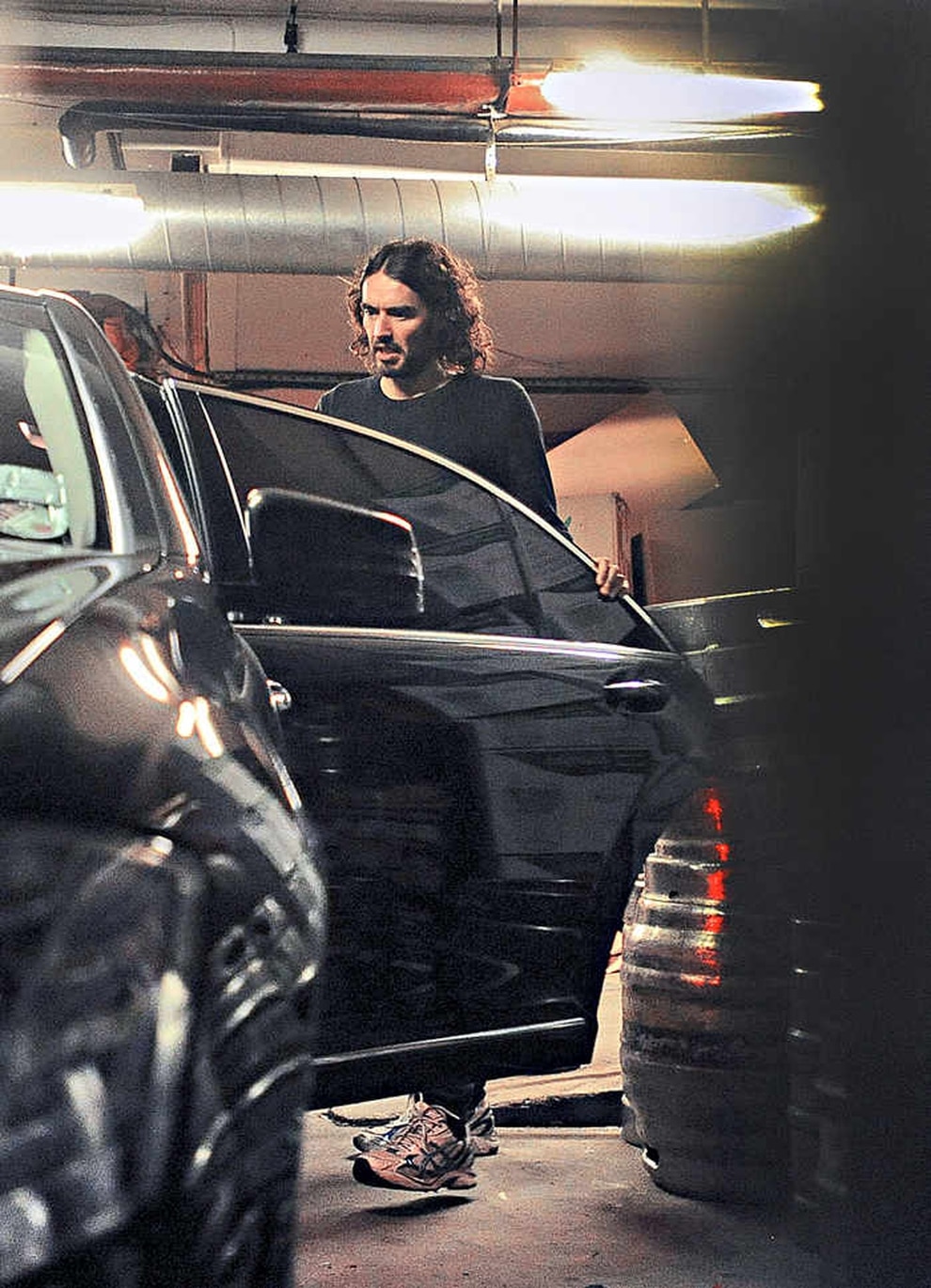 After all, he's not the Messiah. He's just a very naughty boy.

The world according to Russell Brand

On hearing from an audience member that npower had been cutting jobs: "Everyone hates npower? You want a cuddle? All right, I'm trying to focus on npower but I can do a cuddle. Maybe it's the only way we'll keep warm now you've all lost your jobs."

Referring to his use of a swastika on his poster: "The swastika was a Hindu symbol of good luck until it was aggressively rebranded by the Nazis. I was doing a show in Germany and I got a call to say it had been banned. I said 'it's a bit late for that'."

On the Israeli hospital that treats people with a messiah complex: "Don't you think that's a cruel thing to do to someone who thinks they're Jesus, put them in a room full of other people who think they're Jesus?"

On criticism of his movie career: "I'm a very good actor. I refute the charge that I'm always the same in any film and that I'm just playing a version of myself with a hat on."

On Communism: "I know it's unpopular but I looked it up on the internet and it basically means 'sharing'."

On why he went to the House of Commons: "I went because I wanted to give my opinion that drug addiction is an illness, not a crime. Drug addicts don't care about the legal status of what they are taking. 'Oi you, that's illegal.' 'What? I wouldn't have been taking it every day if I'd realised.'"

What did you think of Russell Brand's performance in Wolverhampton? Have your say in the comments below: