It has entertained and warmed the hearts of children and adults alike and now one of David Walliams’ best-loved stories has been brought to life as a thrilling theme park ride. 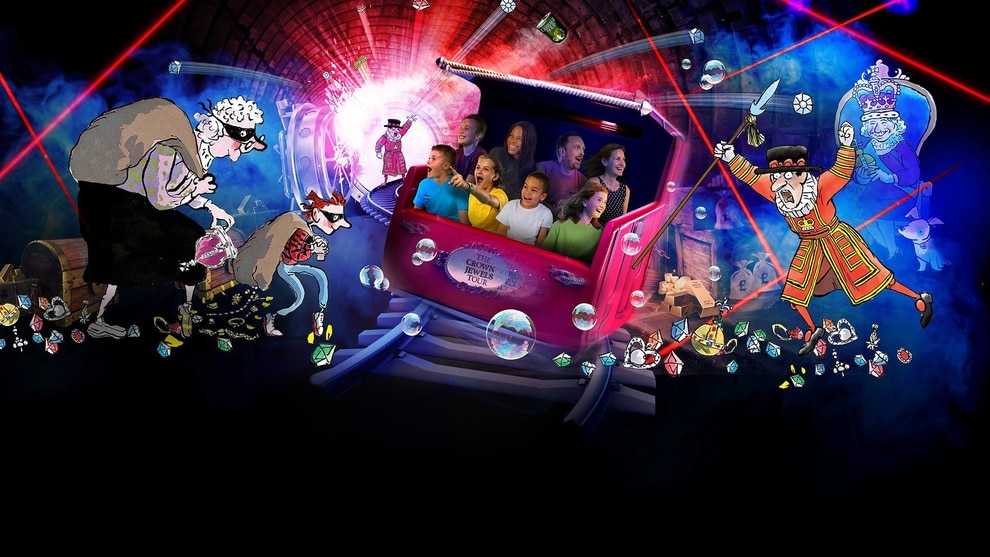 Later this year visitors to Alton Towers will be able to experience the highly-anticipated Gangsta Granny: The Ride.

The popular book tells the story of Ben who discovers that his Granny is secretly an international jewel thief and together they go on an adventure of a lifetime.

The new 4D ride experience will see families join the main characters as they attempt the greatest heist in the history of the world – stealing the Crown Jewels.

And among the team who have been designing and creating the twisting ride for the past two and a half years is John Burton, from Wolverhampton.

“We wanted to target the six to 12-year-old age group. We got reading the David Walliams’ books and they were a perfect fit for Alton Towers.

“They were funny, charming, adventure stories, they just fit very well,” he explains.

The aim was to create a fully immersive attraction that would appeal to visitors of all ages and make them feel as if they were joining Ben and Granny on their adventure.

“We wanted to put the guests in the story rather than them being passive,” says 28-year-old John.

The team came up with a concept for the ride and then presented their ideas to Walliams, who has written 12 children’s novels.

“It was like Britain’s Got Talent. We developed the concept and showed it to David Walliams – it was quite nerve-wracking,” says John.

Thankfully the television personality was delighted with their vision for the ride and has worked with the team to develop the scripts and inject extra comedy moments into the experience for visitors.

And if they listen extra closely when entering the ride, they will hear Walliams as the voice of the royal tour guide.

“We worked very closely with David. He was very passionate about being involved,” says John.

On-board a royal carriage, guests will set off on a Crown Jewels tour only to be caught up in Ben and Granny’s audacious adventure.

The ride will whizz, twist and spin passengers 360 degrees through a series of scenes where they will see, feel, hear and even smell an electrifying and unique retelling of the story.

Using state-of-the-art special effects, 3D projection-mapping and animation inspired by the artwork of Tony Ross, guests will descend with Ben and Granny into the sewers, be chased through the streets of London and even come face to face with the Queen.

“It seats eight guests in the car and it can rotate, twist and spin. It’s a combination of theatre, which David is quite passionate about, 4D cinema and a theme park ride rolled into one,” says John.

Construction of the ride began around seven months ago and the team has been working hard to bring the different elements of the ride including the high-tech special effects together.

“Everything is bespoke, nothing is an off-the-shelf piece. There’s lots of Easter Eggs for fans of the Gangsta Granny book,” says John.

Creating the ride has been a labour of love for John whose previous projects include The Walking Dead Rollercoaster at Thorpe Park Resort and Dragon Slayer at Warwick Castle.

He grew up with a love of theme parks and studied architecture and art to help him secure a job in the industry.

“It’s every kid’s dream to be a theme park designer. It’s one of those things you think is only a pipeline but this job came up, I applied and I got it,” says John who has now been in the role for three and a half years.

He’s taken hundreds of trips on the ride already while the team has been putting the finishing touches to the experience and now he is looking forward to seeing the reaction of visitors.

“I’ve been working on this for two and a half years. It’s been my life. I’ve put a lot of heart and soul into it so I’m excited for everybody to have a go on it,” he says.

As well as Gangsta Granny: The Ride, the themed area will feature a host of other rides and attractions inspired by Walliams’ much-loved characters.

Visitors will be able to pick up a crazy bargain in Raj’s Shop, race on a regal thoroughbred on the Royal Carousel and giggle with delight on Raj’s Bouncy Bottom Burp.

They can also expect to encounter other surprises and twists along the way all aimed at ensuring they leaving the theme park smiling.

“It’s not very often that you get to make a ride with a lot of humour in it – we’ve had a lot of fun,” says John.

Guests will be able to stay a uniquely-themed Gangsta Granny room, surrounded by the book’s much loved characters and hidden treasures.

Walliams, who has sold 37 million copies globally since publishing his first children’s book in 2008, has been full of praise for the new ride, saying: “I never imagined it would happen so it’s a real delight to see my characters brought to life in a ride.

“I’ve worked really closely with the team at Alton Towers to make sure the ride is just as funny and exciting as the book.

“I think children and their parents – and even their grandparents are going to love it.”

The Voice: Budding performers flock to Wolverhampton for auditions - in pictures