The man with healing hands: What it's like to be a non-league football physiotherapist

He’s the man players turn to for help when they need to make a speedy recovery after picking up an injury on the pitch. 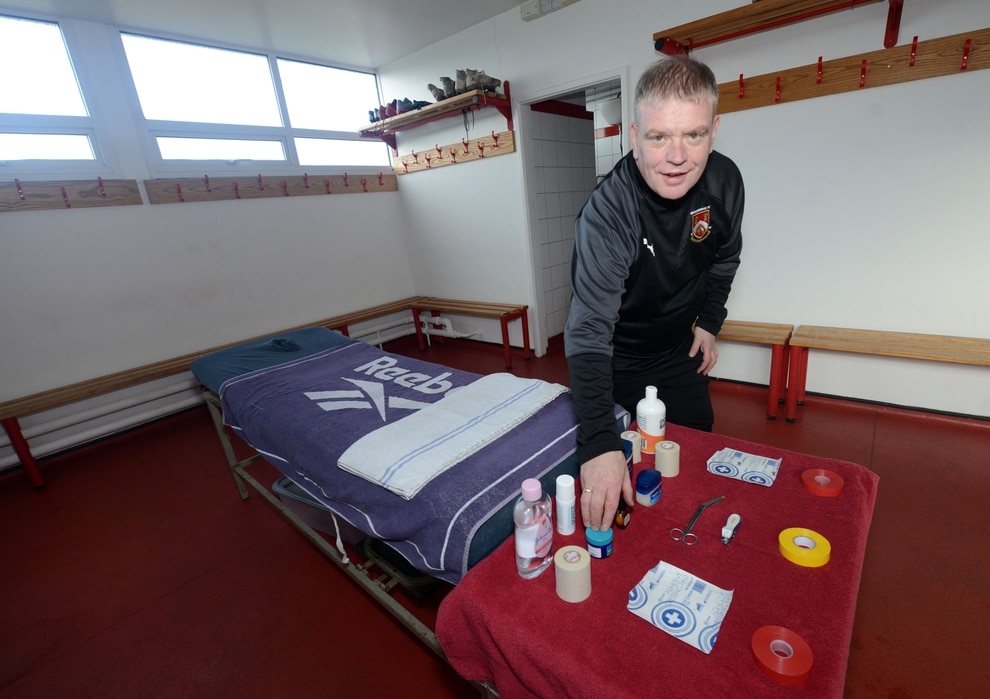 Gavin prepares the treatment table in the home dressing room 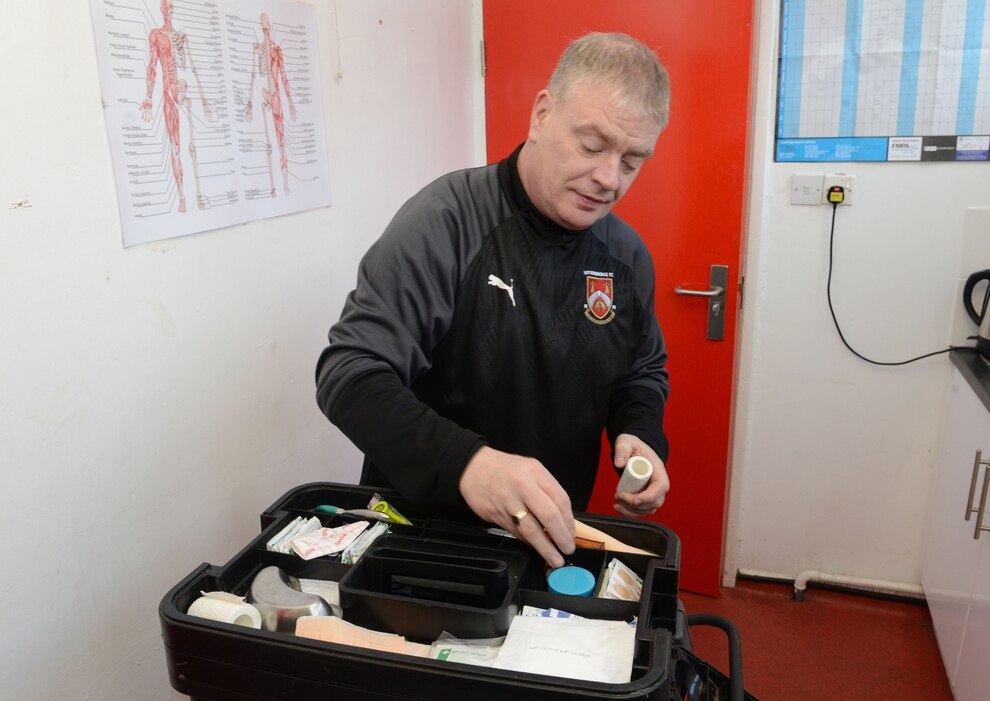 Gavin prepares his medical kit before every match 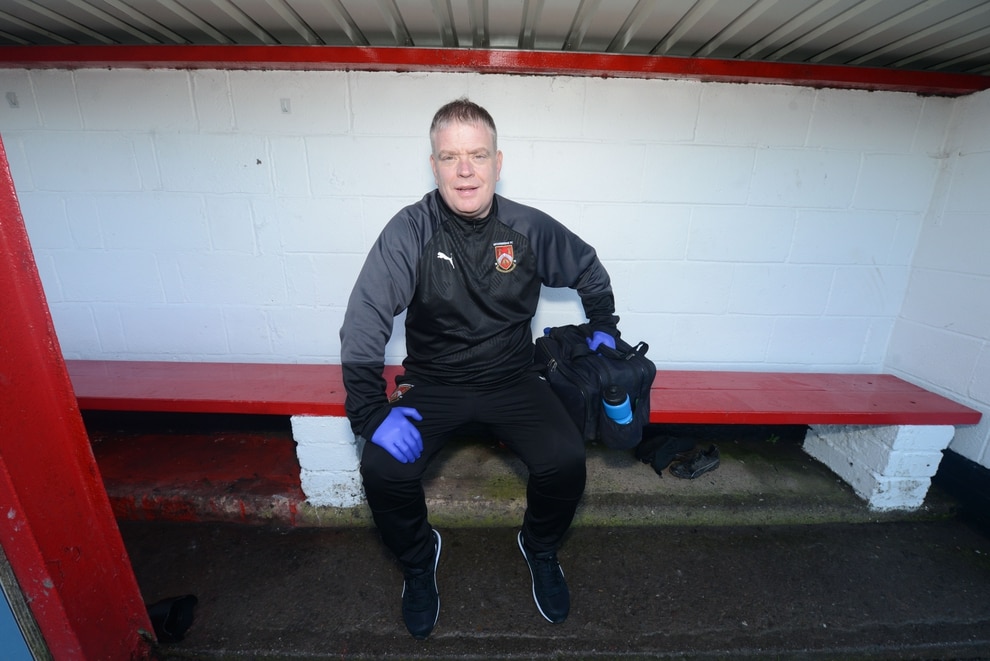 Whether it’s a calf strain or shin splints, as Stourbridge FC’s physio it’s Gavin Blackwell’s job to get them back to match fitness in time for the next game.

“The aim is to provide the manager with as many fit players as possible for each game,” says the 48-year-old, who has been involved in football for more than 30 years.

A key part of the backroom team, it’s a role that captured his interest from an early age and soon became a way of life.

“Many years ago, I started following Halesowen Town as a supporter and I would see the trainer, as they were called then, running on with his bag to treat injured players. I was fascinated,” says Gavin.

Taking inspiration from the likes of Fred Street, formerly of Arsenal and England, and the late Fred Birch at Halesowen Town, he underwent the necessary training including a degree in sports therapy and the FA’s Intermediate Trauma Medical Management in Football qualification.

Over the years he worked with squads at Halesowen Town, Hednesford Town, Tividale and Wolves Academy before rejoining Stourbridge FC for a second spell at the club last summer.

“The physio is part of a backroom team, along with with the assistant manager, coach, goalkeeper coach and others who are part of the support machinery and advise the manager in his day-to-day quest to field his strongest team of players, usually twice a week for something like 50-plus games a season.

“This usually has to be done using a playing staff of recognisable squad players of about 18 to 20 players. There are usually at least two long-term injuries, who are definitely out of the next game, and a string of ‘running repairs’, who will play but may have to be nursed from training until the last minute.

“Add to that suspensions, simple illness and domestic unpredictability and you can see a great deal of juggling goes on day-to-day, week-to-week,” Gavin tells Weekend.

Over the years Gavin has seen many changes in the industry but he says that the principles of injury treatment have mostly remained the same.

“The diagnostics of serious injury and surgery techniques have improved massively from when I first started. For example, they only used to have an X-ray but nowadays they also have MRI and ultrasound scans.

“Surgery techniques have improved beyond all recognition along with surgeons who are more specialised in particular injuries for example an anterior cruciate ligament (ACL) rupture (ACL) of the knee,” he explains.

“I used to have to cut bandages for tie-ups the night before a game. They don’t use tie-ups nowadays. It’s tape and more tape and has to be the same colour as the socks,” he adds.

Gavin is on duty to help the players get ready for their Tuesday and Thursday night training sessions at the War Memorial Ground. “My evenings consist of preparing players for training.

“This involves anything from trimming a corn to a quick massage on a stiff calf plus, of course, the usual pre-training strappings, which are ubiquitous in our game.

“Then treatment of the ‘running repairs’ with some light training within injury limits. And there’s time to check on the more seriously injured players who are usually working out doing safe body work,” he says.

The job can also involve back-to-back long journeys on a Saturday and Sunday for matches, often from one end of the country to the other.

“Over the years I have made long midweek trips to Gretna, Dover, Lowestoft, Truro and Barrow.

The nature of the human body can make the job challenging at times as it can be unpredictable, he tells us.

“You can do your best clinically and technically but injuries are injuries, the fact that the games kicks off at 3pm – injuries don’t acknowledge that,” says Gavin.

Over the years he’s had the honour of being part of many successful sides and The Southern League Cup, the Southern League Midland Division title and the Northern Premier League play-offs are just a few things he has been involved in winning.

But there have also been many heart-breaking moments too along the way during his time at Hednesford Town when the team lost on penalties to Salisbury City in the 2010/11 play-off final.

He is passionate about non-league football and believes a physio in the top flight may not be given the same opportunities to connect with his players due to the cut-throat nature of the higher leagues.

“Winning a match is the best feeling in the world but passion is often needed to get the best out of yourself and the players; something I feel is missing today.

“As the merry-go-round keeps spinning and throwing people off to other clubs, physios barely have time to be emotionally invested in their club, so do they care?

“Winning and losing means so much to me, especially in the massive games, because I care so much about the players and I am so passionate about the team doing well,” says Gavin.