Black Heath cactus collector shows no sign of slowing down

Best known as Cactus Stan, for more than 50 years Stan Griffin has been looking after cacti and succulents and now at the age of 70, he shows no signs of slowing down. Stan Griffin at his Shrewsbury exhibit Stan with a cactus Stan in his greenhouse 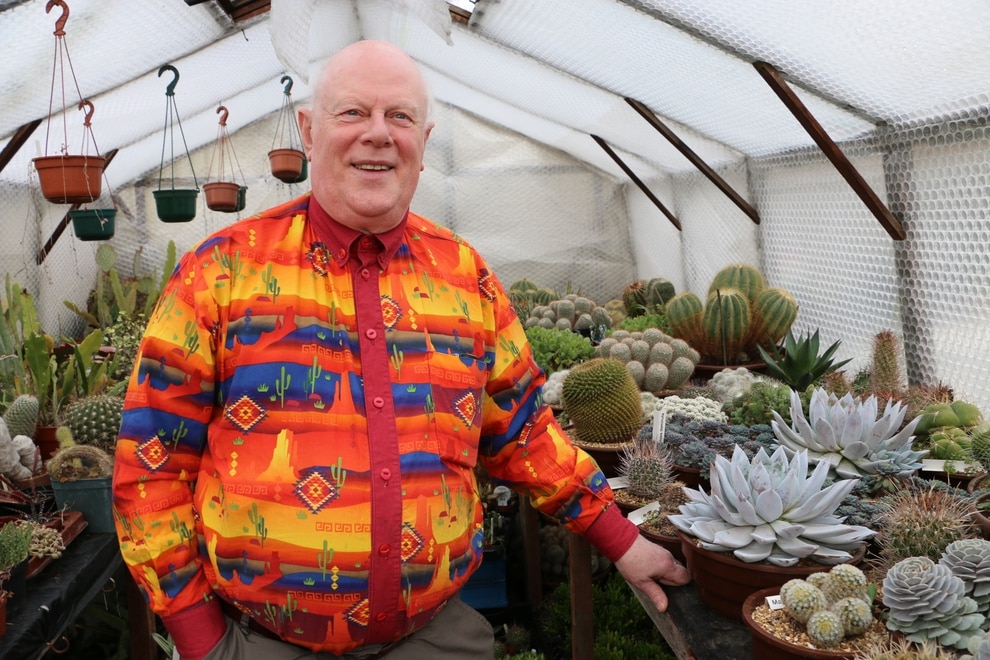 Stan in his greenhouse

Growing up in Black Heath, Stan originally got his first cacti cutting at the age of 12 and has never looked back.

Despite his house having no central heating, he nurtured the plant through the winter, creating a glass terrarium and adding a light bulb in a biscuit tin to keep it warm enough to survive the cold.

He has kept cacti ever since and now has so many he’s lost count, storing them wherever he can find space, on windowsills, bathrooms, greenhouses and polytunnels.

“My collection grew quite rapidly in the 1980s when I used to work alongside the British Cactus and Succulent Society and started doing displays for them at the major shows.

“I’m still and always will be fascinated by the plants. They’re so different to everything else. You do have to persevere.

“I have at least 300 books on cacti and it’s interesting to know where the plants come from, I’ve actually been to Argentina to study them.”

With subsequent trips to the Queen’s Garden Party and a growing social media presence, Stan has fully embraced his new life.

However, his success has come later in life, as for 36 years he worked as development engineer in Oldbury, before taking a few other engineering roles, he found was getting tired of work.

His hobby and passionate had always been in cacti and he helped out at Craig House Cacti - a horticultural centre in Sandwell – before taking over the organisation alongside his partner Vicki Newman, after the previous owner retired.

They have gone from strength to strength ever since winning eight Chelsea golds, 50 consecutive RHS golds and 107 consecutive golds overall.

It’s not just the medals they have gained a reputation for as the cactus obsessed duo wear a new specially made cactus-themed outfit for the big exhibitions every year, attracting media coverage far and wide, including live interviews for the BBC.

They’ve also had their picture taken with many a celebrity too, including Kim Wilde, Richard E Grant, Sue Holderness, who played Marlene from Only Fools and Horses, Jerry Hall, Naomi Harris, David and Rosemary Bellamy, Anne Swithinbank, Ian Lavender, Jim Carter and the late Carrie Fisher.

With such a dedication to the pursuit, he has also garnered a healthy collection of green-fingered fans including Carol Kline, Diamuid Gavin, Monty Don, David Bellamy and Bob Flowerdew.

Need cheering up? Great April Fools' hoaxes of all time