World Book Day: What are the stars reading?

From a biography of a Second World War hero to a literary thriller about a man born out of wedlock to a feminist leader – the favourite reads of Black Country stars are revealed as World Book Day is celebrated around the globe.

Today is the 19th year of World Book Day, a celebration of authors, illustrators and books, which aims to inspire youngsters to explore the pleasures of reading by providing them with the chance to own a book of their very own.

Millions of free book tokens are sent out to schools which children can then exchange for one of 10 selected books, or receive £1 off a different book of their choice. The scheme is funded by publishers and booksellers.

Whilst aimed at children, World Book Day provided the perfect excuse to ask some of the Midlands' great and good what their favourite reads are, a question which proved more difficult than they expected for some.

Author and journalist Sathnam Sanghera, who wrote The Boy With The Top Knot, about his experience of growing up in Wolverhampton, chose Any Human Heart by William Boyd.

But the 39-year-old former Wolverhampton Grammar School head boy and Cambridge University graduate stressed it was 'probably' his favourite read 'at the moment.'

"That's a very tough question," he told the Express & Star, "It changes all the time."

Here's how the stars answered our question:

TV presenter Suzi Perry could not confine herself to one book, giving us four of her all-time top reads, three of them looking at the reality and effects of long-term captivity.

They included Long Walk To Freedom, Nelson Mandela's 1995 autobiography profiling his early life, coming of age, education and 27 years in prison, and Some Other Rainbow, the memoir by journalist John McCarthy and his then-girlfriend Jill Morrell, of his five years' captivity in Beirut from 1986 at the hands of Islamic terrorists. The 45 year old, who grew up in Finchfield, also chose The Alchemist by Apulo Coelho, which follows a young Andalusian shepherd in his journey to Egypt after having a recurring dream of finding treasure there and A Thousand Splendid Suns, Khaled Hosseini's heart-rending novel set in war-torn Kabul.

Stafford comedian Dave Gorman, 44, selected The World According To Garp, John Irving's 1978 thriller about T.S Garp, whose mother wanted a child but not a husband.

Dudley North MP Ian Austin, 45, revealed his Number 1 read is The Spy Who Saved 10,000 Jews by Michael Smith, a biography of British Second World War hero Frank Foley who rescued 10,000 people from the Holocaust before retiring in anonymity to Stourbridge.

But he plumped for Graham Greene's Our Man in Havana, a novel set in Cuba which makes fun of intelligence services, especially the British MI6, and their willingness to believe reports from their local informants.

Originally sold as a memoir and later marketed as a semi-fictional novel following accusations of literary forgery, it tells how a 23-year-old alcoholic and drug abuser copes with rehabilitation in a twelve steps-orientated treatment centre.

He said: "Hope you've read the sequel, My Friend Leonard!"

Over the last few weeks, the organisers of World Book Day have been sending schools packs of book tokens and age-targeted resource packs full of ideas, activities, display material and other information about how to get involved.

Marked in more than 100 countries across the globe, it is billed as the biggest celebration of its kind.

According to a new poll of more than 7,000 book lovers to mark World Book Day, female heroes and villains now vastly outnumber their male counterparts in readers' affections. Although JK Rowling creation Harry Potter was voted the nation's favourite children's book hero, six of the top 10 were heroines.

Harry Potter's arch enemy Lord Voldemort was voted most evil villain but seven of the remaining top 10 terrors were women, including classic characters Cruella de Vil, from Disney's The Hundred and One Dalmatians, and Miss Trunchbull, the headmistress of Crunchem Hall Primary School from Roald Dahl's book Matilda.

Harry Potter characters took 38 per cent of the top 10 vote for Most Evil Villain, although Bill Sykes – who appeared nearly 180 years ago in Charles Dickens' Oliver Twist – can take some pride in receiving almost five per cent of the vote to be named second most evil male villain, placing him at seventh overall.

Included among this year's £1 books are David Baddiel's The Boy Who Could Do What He Liked, Roald Dahl's The Great Mouse Plot, Star Wars: Adventures In Wild Space by Cavan Scott, Welcome To The World Of Norm by Joanathan Meres and Kipper's Visitor by Mick Inkpen. 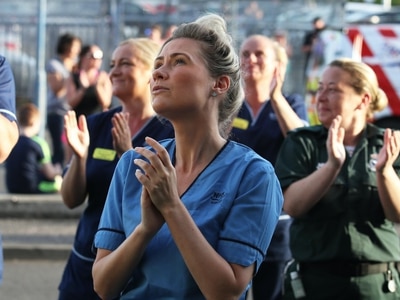 Online rehabilitation services to launch for thousands of coronavirus survivors